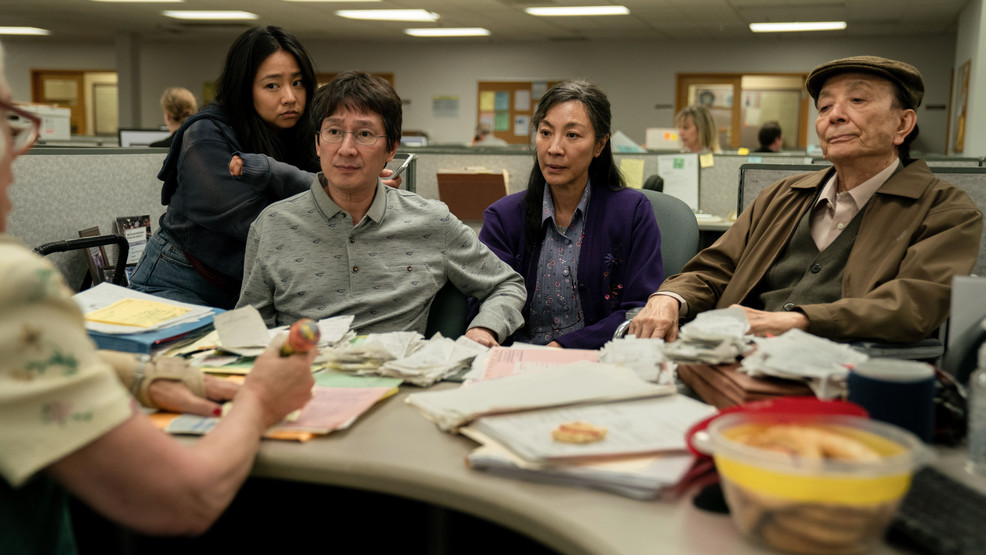 Photo Courtesy of A24
SEE MORE

Review: New film 'Everything Everywhere All at Once' is a chaotic ride

"The less it makes sense, the better," Waymond (Ke Huy Quan) says to his wife Evelyn (Michelle Yeoh). This is the most explanation we are given as the convoluted, inexplicable plot of “Everything Everywhere All at Once” unfolds like a blanket knotted at every string of thread within the fabric itself. Though frustrating at times, and exhilarating at others, the process of trying to make sense of the science fiction – emphasis on the fiction, rather than the science – is not for those who insist on understanding the minutiae of plot and the mechanics of a film's universe. Because it is nearly impossible to fully untangle this film from itself, and there is surprising relief in letting go of logic and simply hanging on for the ride.

Other popular fantasy films that tackle the multiverse and time travel often provide a linear, easily identifiable order to events. In comparison, “Everything Everywhere All at Once” is pure chaos, throwing any science fiction etiquette out the window and delving instead into raucous pandemonium. Evelyn is a downtrodden Chinese immigrant whose laundromat sucks the life out of her, acts as a distraction from her crumbling marriage and pushes her only daughter Joy (Stephanie Hsu) even further away. Evelyn is the walking example of just how far one can be stretched in every direction before something breaks, and though the title surely refers to the futuristic developments of parallel universes, it also obviously references Evelyn's propensity to taking on too much and stretching herself too thin.

It is at the IRS office where she meets with a blunt tax agent (Jamie Lee Curtis) to straighten out her improperly filed return that Evelyn’s universe splinters. Another version of her husband inhabits his body and hastily explains the sticky situation: he is from another universe, one parallel to theirs, where a dangerous entity called Jobu Tupaki is looking for the version of Evelyn that has the ability to stop them from destroying everything.

Go ahead and reread that sentence a few times, and if it still doesn't make incontrovertible sense to you, that's alright. Discussions of time and space are complicated, and metaphysical science and mathematical subspecialties can be dense. However, that isn't the focus of "Everything Everywhere All at Once." The film uses the multiverse to dissect our diaspora for the past and how the choices we make, make us who we are. If Charlie Kaufman had reinvented "A Christmas Carol," it would look something like this. At face value, we can accept the film's absurdities because the storytelling is sharp, innovative and resolute and because the message manages to squeeze through the noise of the absurd.

It is incredibly farcical at times. The characters have to wear vintage headphones in order for the transfer of consciousness to take place. By bringing awareness to their multiple timelines – created with each and every decision, both mundane and life-altering – they are able to switch between them. But in order to make the jump and to "download" the skillset and memories from a different timeline, they must do something unexpected. Profess unrequited love to a stranger. Break an elbow. Switch your shoes so they sit on the wrong feet. (Those are the tame examples, though the X-rated ones bring some of the film's best laughs.)

“The less it makes sense, the better,” after all. Co-writers and co-directors Dan Kwan and Daniel Scheinert throw it all against the wall and most of it sticks. Like one might expect from a film about the multiverse, it’s all here: metaphysics, martial arts, romance, drama, comedy, even a pack of zombie-fighting antagonists. Yeoh's frenetic energy and effervescent charm makes it quick to identify why she is one of Hollywood's most underrated leading actresses, and Quan, who will be instantly recognizable to film fans as the 80s child actor from "The Goonies" and "Indiana Jones and the Temple of Doom," brings his own quirky allure to the film.

It also dives deeply into the immigrant experience with tragically heartwarming accuracy; it is Evelyn’s decision to leave her homeland for America with Waymond, breaking the heart of her disappointed father Gong Gong (James Hong) that seems to be at the hinge of everything. Similarly, for Joy, it is her tumultuous relationship with her mother that is at the center of her mental undoing.

“Everything Everywhere All at Once” succeeds in bending genres and telling a befuddling, complex story that, once we're in the thick of it, we don't want to end. The editing is quick, fast, and, at times, mesmerizing. How quickly Kwan and Scheinert jump from scene to scene while maintaining crisscrossing storylines and universes is a sign of true talent in writing and directing. There is never a break in earnestness. It may not be for everyone, and those prone to motion sickness may be whipped around to nauseating effect. But there is too much fun to be had, and indulging is simply everywhere... that theaters exists.

"Everything Everywhere All at Once" is in theaters now.