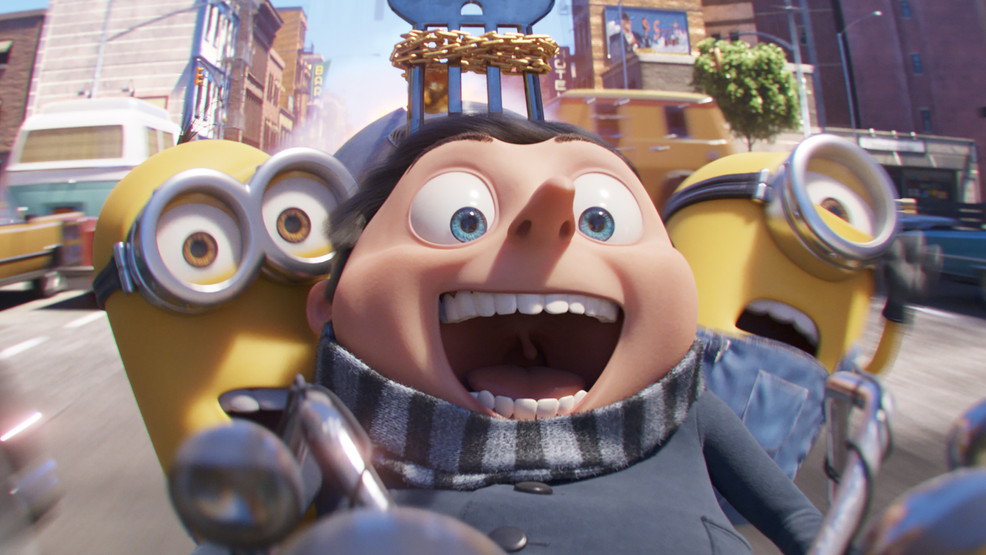 Review: 'Minions: The Rise of Gru' is an adorable villain origin story

If you don’t anticipate a Minions movie to have at least one bare butt gag, then you’re not in the right theater. In fact, a majority of what makes us laugh about the sunshine-colored, phallic-shaped creatures of unknown origin is their comedic timing, a tight-rope walk between unintelligible goof-talk officially known as Minionese - though it's hard not to hear an ambiguous fusion of Spanish, French and Italian - and physical comedy pulled directly from "The Three Stooges" or, more comprehendible for this generation and demographic, "Loony Tunes."

But it is the Minion's unquestionable love and loyalty to Gru that has brought kids and adults back for four feature films: "Despicable Me" 1, 2 and 3 and the first "Minions" film. The fifth in the universe, "Minions: The Rise of Gru," offers a sweet, impeccably-timed (literally timed, clocking in at a lean, mean 97 minutes) installment with much of the same with a few new, welcome elements.

Picking up where its 2015 predecessor left off, "Rise of Gru" makes the wise choice of bringing back a voice-modulated Steve Carrell who reprises his role as the nefarious villain, this time as an 11-year-old child who commits small-time crimes in 1970s suburbia. He still has his hair. He's a wide-eyed, relatively-innocent crime junkie, honing his craft in the hopes of one day joining the headline-making crew of eclectic outlaws known as the Vicious 6.

Taraji P. Henson voices the new leader of the pack, Belle Bottom, who usurps – and nearly kills – founding member Wild Knuckles (Alan Arkin) after he retrieves the Zodiac Stone, a mysterious, powerful relic with the ancient ability to turn its yielder into animals of the Chinese Zodiac timed with the Chinese New Year. It is this artifact that Gru swipes from the Vicious 6 during his interview where he's seeking to fill the position opened up by Wild Knuckles' exit. Instead of impressing the adult villains, Gru's sticky fingers send the five specialized fighters with punny names and iconic voices – the Scandinavian roller-blader Svengeance (Dolph Lundgren), the lobster-hoofed baddy Jean-Clawed (Jean-Claude Van Damme, epic), the nun-chuck-wielding nun..."Nun-Chuck" (Lucy Lawless) and the superhumanly strapping weightlifter Stronghold (Danny Trejo) - into full offense mode, stopping at nothing to retrieve the valuable weapon.

Gru's gaggle of yellow henchmen might be our focus here, but it is Gru's development from juvenile wrongdoer hopeful to a bonafide supervillain that offers the majority of plot development. The three most famous of the Minions - Kevin, Stuart and Bob - veer from the group for some trailer-happy footage, and it's hard not to chuckle at their gags. Bob is the unpredictable wild card, dressing up as a lipstick-smacked flight attendant or whacking his head in undeniably successful physical comedy. The newest featured Minion is Otto whose braces, chubby physique and air-headed hijinks brings the most laughs, including a dreamy ride through Death Valley with a hippy biker voiced by RZA of Wu-Tang Clan fame.

The film comes full circle when the bumbling trio finally makes it to San Francisco to rescue their pre-pubescent boss and, instead, get a crash course with Master Chow (Michelle Yeoh) who teaches them martial arts and, more importantly, how to "release their inner beast." This metaphor enters the literal realm when the predictable showdown of Chinese Zodiac creatures hits the heat of battle. Hardly before has a bunny, a goat and a rooster, flaxen and blazing, elicited such laughs as when they enter full beast mode. The battle finds the Vicious 6, now 5, against the underdogs, and man can those dogs dig up some new tricks.

Unlike some of the other films, which focused on adult storylines and emotions, this one sticks to the child-centric script, throwing in dashes of details geared at making adults giggle. The perspective offered by the period piece opens up plenty of such roads. Parents, and even grandparents should there be any that find themselves in the theater, will find its commentary on rotary phones and car cassette players humorous. Gru's mother (remarkably voiced by Julie Andrews, of all legends) throws a Tupperware party gone awry.

At its best, "Rise of Gru" finds inventive avenues for its charming stars to tickle our funny bone, while maintaining a storyline that simultaneously allows the universe to expand and keeps its audience invested in the present saga. Thankfully, there is no "at its worse," because "Rise of Gru" is kettle popcorn fodder: salty, sweet and a generally pleasing film that keeps the property alive and despicably well.

"Minions: The Rise of Gru" is in theaters now.