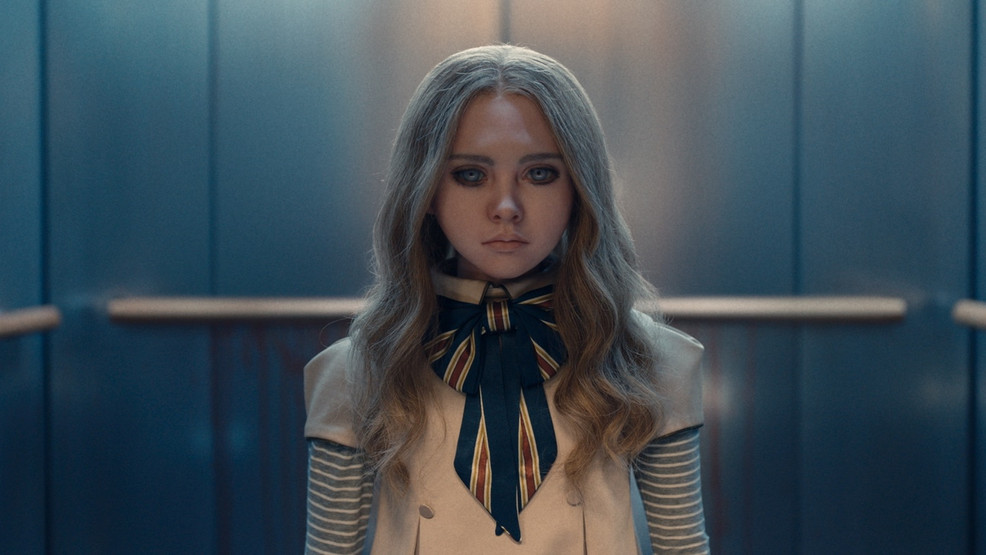 There is no wrong reaction when it comes to "M3GAN," a surprisingly entertaining, erratic and totally unhinged horror film. This is particularly shocking considering its release in what is colloquially known as "dump month," the worst time of year for the box office and, hence, the best opportunity for studios to release their biggest stinkers. Which is why it comes as a surprise that "M3GAN" doesn't stink. It doesn't smell at all, except of powder pink murderous fun that finally starts January off with a whack, smack and "Hi, I'm M3GAN."

Summoning to most minds born before the turn of the millennium that orange-haired, overall-wearing Chucky from "Child's Play," a killer doll remade many times since his arrival onto the scene in 1988, M3GAN — short for Model 3 Generative Android — isn't the result of a voodoo ritual transferring the soul of a serial murderer into a kid's toy. Based on a story by Akela Cooper and modern horror master James Wan, "M3GAN" is far scarier thanks to its practical implications, moving past enchanted doll slasher and into a new genre of a highly skilled assassin in a titanium body and all the know-how a microchip can offer. Robots and artificial intelligence have become the villain of many science fiction thrillers, but none so believably as this.

Ambitious tech creative and career roboticist Gemma (Allison Williams) works at Funki, a Seattle-based toy company best known for their Perpetual Pets, a Furby-like animatronic pal for children that, as featured in its ridiculous faux advertisement, won't die on you like real pets inevitably will (it's explained with even more chuckles by the film's sarcastic opening). Bored and spinning her wheels on minor updates to the vacuous plaything, Gemma has a vision of a sophisticated, expensive and highly intricate doll that can do it all.

It isn't until her sister's fatal car accident that she inherits her niece Cady (Violet McGraw) and is inspired to give the grieving girl a companion. The beta prototype for M3GAN is born — a blue-eyed, sandy-haired, four-foot female A.I. Pinocchio. It can walk and talk like a real girl, performed with precision by Amie Donald and voiced by Jenna Davis, but worst of all, the child it's paired with will likely become acutely attached.

Cooper and Wan are surely making a point here. M3GAN might as well be a digital tablet or a video game or any number of toys that turn addictive when acquired by impressionable minds, but this life-like doll is far more insidious. Her mission is to protect Cady at all costs, and her advanced technology that learns with every new situation pushes M3GAN past the point of moral ambiguity and straight into the devil's work. She eliminates playground bullies and intercepts neighborhood threats.

Filled with purposefully comedic, cringe-worthy and satiric moments, "M3GAN" updates and technologizes a story we've seen time and again. If the film has one pitfall, it is that the start and finish won't offer any surprises to most well-watched viewers. There is certainly no question of M3GAN's wicked destiny to cause destruction. It's the nature of this "evil spirit" horror subgenre, simply substituting the evil spirit for a digital one and the third-act religious ceremony like the exorcism or mystic power chanting with some technical deprogramming and good ol' fashion fighting.

The real shock director Gerard Johnstone and his team of visual effects professionals stoke in their audience are the incredible, eery, life-like properties of the doll. Her features, so human-like, are too perfect to constitute a real person. Her small face is dwarfed by large eyes and miniature, perfectly plumped lips. She dresses like a metropolitan socialite, and M3GAN, eyes unblinking, looks like she's judging every situation with her corrupt but brilliant computer processing.

While we've seen some of these killing moments before, conventionally used to build momentum into the film's climax — if you've seen films like "The Good Son" or "The Hand That Rocks the Cradle," then the infiltration of a homicidal bully into a family unit could be its own category — "M3GAN" utilizes impressive effects and choreography to make it feel new. The destination may be familiar, but the journey there is utterly fresh. It would also do the film a disservice to undercut its humor. M3GAN breaks out into random, uncomfortable songs throughout the film, eliciting instant laughs from the audience, who understand the strange need for children's toys to incorporate poorly penned music.

As M3GAN gets increasingly psychotic, the humans around her struggle to keep her powered down. She slowly becomes a fully realized, independent entity, another metaphor for growing up and coming into your own. Wan, whose film credits include "Saw," "Insidious" and "The Conjuring," is flexing his potential to expand new horror stories. Wan, with the help of M3GAN and team, kills it.

"M3GAN" is in theaters now.