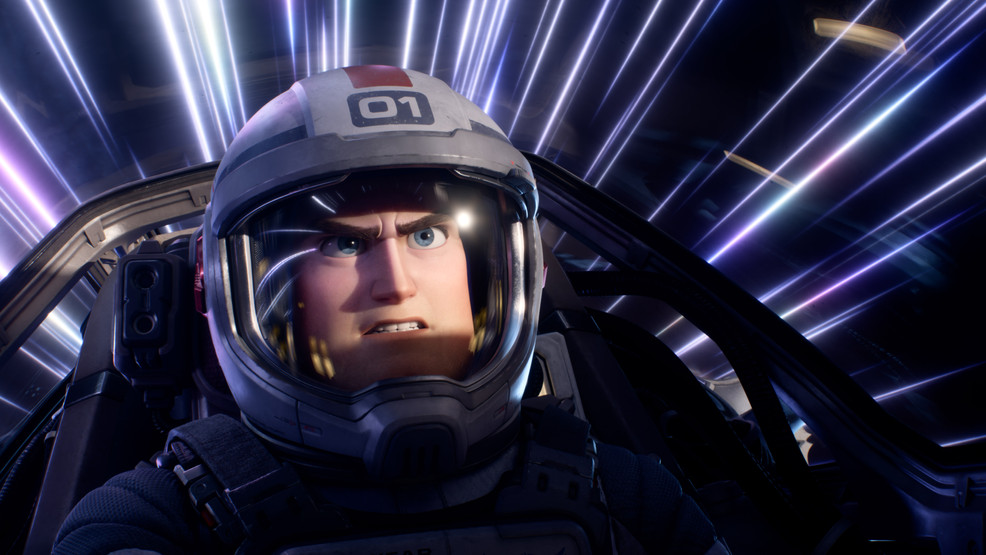 AND BEYOND -- Disney and Pixar’s “Lightyear” is an all-new, original feature film that presents the definitive origin story of Buzz Lightyear (voice of Chris Evans)—the hero who inspired the toy—introducing the legendary Space Ranger who would win generations of fans. Directed by Angus MacLane (co-director “Finding Dory”) and produced by Galyn Susman (“Toy Story That Time Forgot”), the sci-fi action-adventure releases on June 17, 2022. © 2021 Disney/Pixar. All Rights Reserved.
SEE MORE

Unpopular opinion: "Lightyear" is the most unique film in Pixar's library. It's not the best (best, of course, being an utterly objective superlative). Nor is it the worst (worst, unobjectively and inarguably, being reserved for one of the "Cars" movies). But it is unique, namely because it attempts to be something that no film in the Pixar canon has before: an animated-yet-live-action, adult-skewing action-adventure prelude to one of the studio's most prized properties. That property, of course, is "Toy Story" from 1995 which introduced the world to Woody the Sheriff and Buzz Lightyear the Space Ranger.

"Lightyear," a prequel of sorts that has nothing to do with toys coming to life, establishes within its opening title cards that the film that's about to roll is the basis for the light-up plastic action figure merch that Andy enthusiastically welcomes into his band of misfit playthings.

Cute, right? It's a nifty slide into our exploits which, unfortunately, sputter through a frenetic storyline that isn't quite the origin film for the eponymous space cowboy one might expect. Writer-director and longtime Pixar animator Angus MacLane certainly knows the template, and "Lightyear" has the smart, humorous moments that cue us into its Pixar brand. Our square-jawed protagonist, Buzz Lightyear (Chris Evans), is a much more somber, grounded character than the hyperbolic galaxy traveler voiced by Tim Allen in all four of the "Toy Story" films, though Buzz's unending positivity and bulldogged fixation on his assignment has not changed.

Unlike that Buzz who is cartoonish by comparison, this Lightyear is the straight man whose character arc is supplemented by several comedic counterparts. SOX (Peter Sohn) is Lightyear's animatronic feline companion who meows with wide-eyed adorableness and plays with its own built-in laser pointer, but who is also outfitted with data functioning and computational skills. Like the best of the Pixar films (namely "Up"), anthropomorphic animals are a crux, and SOX is as endearing as they come. It shouldn't come as a surprise if SOX becomes the next IRL merchandising opportunity for a studio like Pixar's parent company Disney, which has mastered the art of cross-promotion and commodity slinging.

But the true hallmark of a Pixar film is its montage sequence (the incredible love story of a barren couple in, once again, "Up" will forever be cemented in film history), and "Lightyear" hinges on its own montage early on as well. Buzz, a decorated space ranger, and his work partner Alisha (Uzo Aduba) are exploring a new, possibly habitable planet many galaxies away from home when a collision strands them and the hundreds of workers in deep sleep aboard their ship. The only way to leave this foreign terrain is to formulate a new fuel crystal capable of getting the spacecraft to the necessary velocity. With the guilt of marooning hundreds of his colleagues on his broad shoulders, Lightyear takes on the job of testing each new fuel concoction, which, thanks to some complicated theories surrounding time dilation, sets him four years in the future every 4-minute test he runs. He runs at least a dozen tests one after the other.

Alisha marries (insert that controversial same-sex kiss that ruffled some feathers), has a family of her own and grows older, all within the blink-of-an-eye flight missions Buzz commits. Hyper-focused on correcting his mistake, Buzz eventually returns to the base and discovers that Alisha has passed and a new regime has taken her place, one that does not prioritize his mission and is willing to continue living on this hostile planet. With one final, rogue test, Buzz uncovers the right mixture for the fuel crystal, though it could be all for naught when alien robots descend and threaten the very existence of the people living on base.

Ever the hero, Lightyear takes on a new assignment: infiltrate the robot's spaceship, destroy it, free his people and send them back home. Despite his hatred for autopilot technology - many scenes are dedicated to expressing his disdain for automated assistance - and for help in general, Buzz has no choice but to work alongside Izzy (Keke Palmer), Alisha's granddaughter, Darby (Dale Soules), a convict on parole and Mo (Taika Waititi), a shy volunteer who provide the film's greatest laughs.

If that sounds like a lot is going on, it's because it is. The action never stops or even slows down long enough for audiences to warm to any characters in "Lightyear," even the titular one. The flying spaceships, the flinging bullets and the electrical-powered swords (no, they aren't lightsabers, though this would have been a true Disney opportunity to plug another of their highly lucrative, wildly popular properties)... on paper, they are a little boy's dream. However, the fighting and action feel almost too real for an animated film, and simultaneously not real enough for the older crowd of viewers looking for "Star Wars" level of space odyssey and blade-to-blade combat. It becomes a tedious task, following Buzz through decades and over-complicated science theories just for the end goal of yet another Pixar moral fable: Buzz learning to appreciate the present and that "you got a friend in me" is imperative to a successful mission.

The mathematical and scientific theories, which are sure to lose most kids under 35, sound realistic even to untrained ears (though how many of us understand quantum physics and time dilation?), but the film's big reveal surrounding Lightyear's longtime enemy, Zurg (James Brolin), is, at best, a flawed premise we're willing to overlook. At worst, it drags in another element to what should be a fairly straightforward adventure prequel. MacLane throws in the character's iconic phrases and you would have to be completely soulless if seeing him in full suit didn't give you butterflies.

We came for Buzz, but we stayed for SOX, and the rest is drowned out by the deafening sound of a haughty space ranger fighting with his autopilot. Sadly, there isn't enough crystal in all the galaxy to bring this film-adjacent up to its predecessor's speed.

"Lightyear" is in theaters now.