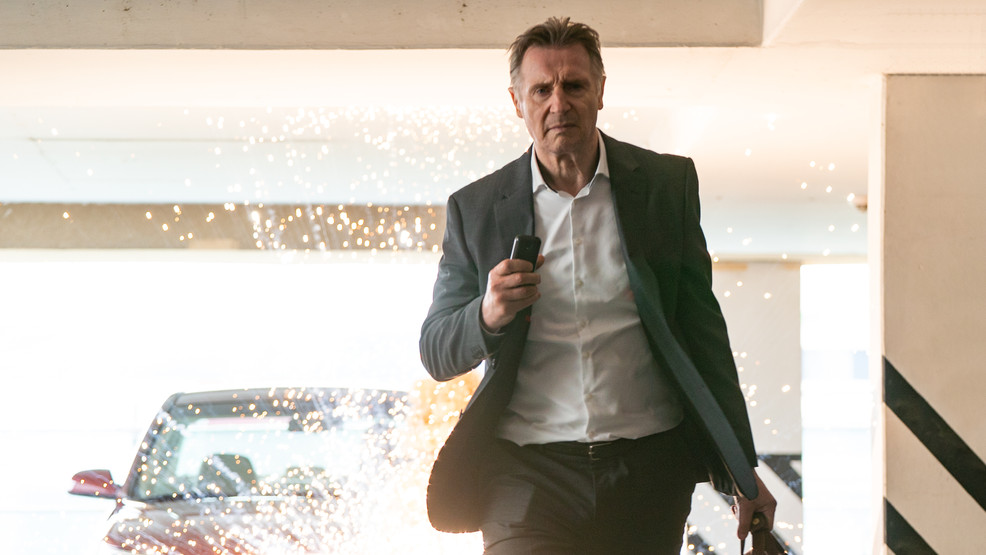 Liam Neeson has found his niche, and with each passing feature, it becomes excruciatingly evident that practice doesn't make perfect. It doesn't even make for improvement. The latest Neeson-headlining thriller to hit theaters this weekend is "Memory," an adaptation of the 2003 Belgian film, "The Memory of a Killer," based on a popular novel by Belgian writer Jef Geeraerts. Screenwriter Dario Scardapane reimagines Geeraerts' lead assassin, here named Alex Lewis (Neeson), by removing him from Antwerp and the cutthroat drama of the political elite, and relocating to the depressingly-depicted border town of El Paso, Texas, where human trafficking is the crime of focus. It's a stretch, however, to use the word "focus" at all to describe this incoherent action-thriller that could use its own set of prescription lenses to draw its bigger picture back into clear view. That is really what "Memory" lacks: characters that feel like they are derived from more than a dime novel or simply cardboard cutouts of cliche roles and a plot that builds towards any discernible crescendo.

Guy Pearce, ever a strong on-screen presence and one of the few redeeming aspects of this picture, stars as FBI agent Vincent Serra who pursues the child trafficking ring. Lewis is facing his newly-diagnosed Alzheimer's that is progressing too quickly for him to keep up, throwing a serious wrench in his job as a stone-cold hitman. He's forced to leave himself notes in black pen scribbled across his forearm, like descriptions of his targets, the places he will find them and, oh yeah, where he stashes the incriminating evidence to bring down the criminal group's house of cards. For some, this will incite associations to "Memento," a sharp indie from 2000 by a then-budding filmmaker Christopher Nolan which also happened to star a young Pearce as a man grappling with memory loss as a mystery unfolds with diligent timing and smart, innovative storytelling.

Unfortunately, the comparisons end there as "Memory" is no such gem. Neeson is a fine actor with established on-screen charisma, but perhaps we expect too much from him based purely on his previous hits. Here, his charm is dulled by Lewis' failing mind and a script that neglects backstory and character development, all of which leave us feeling distant and detached from his performance, however heartfelt and, at times, moving it may be. This hitman may have lost a grip on his mind, but his morals are as steadfast as ever. It is his refusal to shoot a target — a young girl who has seen too much for the liking of his uber-wealthy patrons — that sets him off. Instead of following through with the job or simply leaving the industry altogether, Lewis takes it upon himself to bring justice to the children being exploited and used by a menacing criminal organization. One by one, he begins ticking off those intimately involved in the child sex trafficking operation, all while avoiding arrest by a group of FBI agents (led by Pearce and also starring Taj Atwal and Harold Torres) who are slow to the uptake and who miss an ailing, injured, disoriented Lewis often by mere frustrating seconds.

The key to this film's success would lie, first and foremost, in its storytelling, which explains precisely why "Memory" fails. The film bops from El Paso to Mexico City, introducing characters and poorly trying to establish relationships that don't connect from one scene to the next. Neeson's Lewis, a hardened assassin in his late 60s who has presumably been working for years in the disgusting industry, is just now confronted with a job he finds morally offensive? Is there a reason for his sudden attachment to this young girl he failed to kill, and whose death by another hitman affects him enough to fulfill some unspoken, unprovoked vendetta?

In case this film, with all its poorly-paced action and underwhelming thrills, is giving you a case of Lewis' cognitive decline, it should be remembered that Neeson and Pearce are better than this rubbish that, most shockingly of all, isn't going straight to VOD, a plan of release that has found surprising dignity during the pandemic and would actually benefit a film like this one. As a casual watch from the couch at home, you may be able to forgive some of its oversights. However, if given the choice to strike "Memory" from our own memory, we gladly would.

"Memory" is in theaters now.