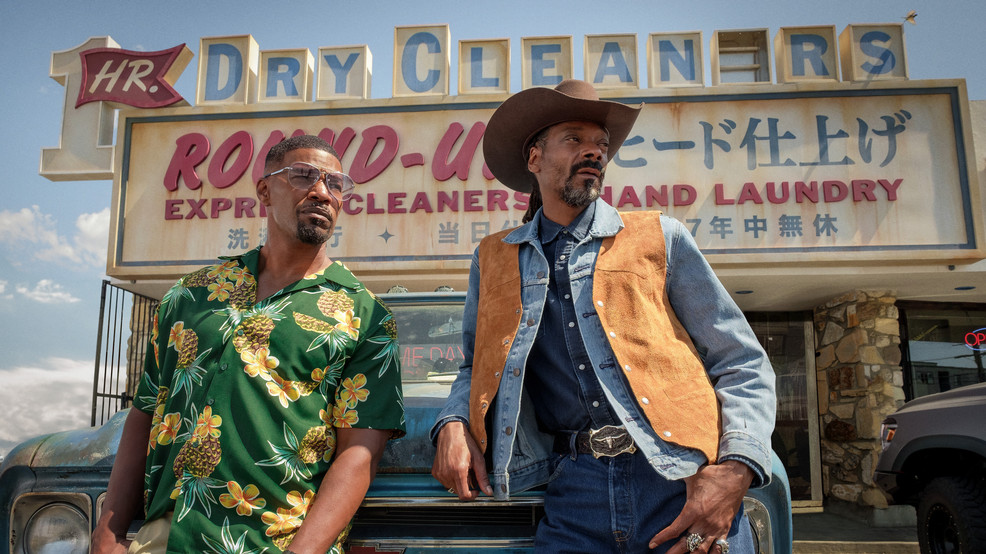 "Day Shift," the newest vampire-hunting buddy comedy, isn’t trying to be taken too seriously. It’s not "Twilight," if that’s what you’re thinking, but it is a surprisingly good time, a semi-somber, sometimes-silly horror-comedy that pits Jamie Foxx against all the undead of the San Fernando Valley. The west coast is a favorite for vampire flicks thanks to its ironic juxtaposition: creatures who require the dark to survive, drawn to sun-soaked spots like Las Vegas ("Fright Night"), New Mexico ("Vampires") and, of course, Santa Cruz (everyone's number one cult vampire movie, "The Lost Boys").

But those films are much more earnest in their depictions, focusing on the brutal, terrifying reality of what a real-life vampire might be if actually let loose in the real world. In near total opposition, "Day Shift" sets Foxx’s character Bud in Reseda, a hot, quiet SoCal suburb, suffering from the growing real estate expansion and hiking prices in the Golden State. He’s a rogue vampire slayer fronting as a pool cleaner, releasing vampires from their unholy agreement with the devil in order to pay rent. He's recently been exiled from the hunter’s union, an institution as seemingly mundane as the DMV, and left to make pennies on the dollar for each vamp fang he collects post-kill. When his ex-wife (Meagan Goode) threatens to move his daughter out of state, Bud must find $10,000 or lose them to Florida.

His plan is to use his connections like high-ranking hunter Big John (Snoop Dogg) to reenter the union long enough to get some cash. Brought in on a cautionary probation, Bud must take on a union babysitter, a tight-laced rule-abider Seth (Dave Franco) who is meant to sabotage his tentative readmittance by holding him accountable for every toe he steps over the line. Unsuspectingly, Bud kills a beloved family member of the menacing 'elder' vampire, the audaciously-named Audrey San Fernando (Karla Souza), who moonlights – sunlights, in this case – as the leading realtor in the Valley. She doesn't seem to sell as many houses as her advertisement, her face plastered on billboards and flyers, would make it seem. What ensues is a biting adventure that puts a fresh spin on the vampire-slaying crusade.

It's rare we see a Black lead in the horror genre, which has been largely left to white actors created by white storytellers. Jordan Peele is doing his best to reverse that trend, and now thanks to Foxx (and the unexpected, but delightful small role filled by Snoop), we’re given another example. Foxx, who is no stranger to the physicality of an action role like this one, sinks his teeth into Bud with his usual humor and authenticity. There is nothing cliche about Bud, and it's a relief to enjoy an imperfect lead as much as we do with this one.

Director J.J. Perry may be at the helm of his first film ever, but he knows stunt work and choreography. Perry has credits in the stunt department dating back 35 years, and his expertise flies off the screen. There is no question that "Day Shift" is in the best hands, leveraging its greatest asset - a call for big, juicy action sequences - to dominate every scene. These vampires aren't regular people with a taste for blood; they have the unnatural ability to crawl inverted, their waists folded into a sandwich as they slither across the floor. They bust through walls, jump off second stories and are wicked at contact combat.

There are certainly some bumps that "Day Shift" can’t avoid, in particular a plot that never quite establishes its vampire-adjacent world. Fangs are valuable, though without much explanation as to why. A novel sunscreen allows the undead to venture out into sunlight with as little protection as an umbrella, yet it’s unclear how that factors into the plot, where the sunscreen comes from and, most importantly, why all the bloodsuckers aren’t applying it. Seth reveals that there are five distinct "types" of vampires without any further details about what sets them apart and why it matters to our story.

These sort of trivial, but often imperative, minutiae can be vital specifics that create a more complete experience for viewers. As the film progresses, it becomes readily evident that the logistics of this world-building is far too back-breaking for "Day Shift," which would much rather entertain than be confined to this coffin of subtleties. This is easy to overlook with bodies dancing across the screen and plenty of other fun distractions, like Foxx and Franco's striking chemistry, each playing up their individual strengths, albeit as characters that don't fall outside their comfort zones. Normally, you may ask for your meat cooked a little longer, but that will seriously prevent you from enjoying the ride. "Day Shift" clocks in for the light, fast, surprising paycheck, making overtime thanks to its brute strength, if not its elevated narrative.