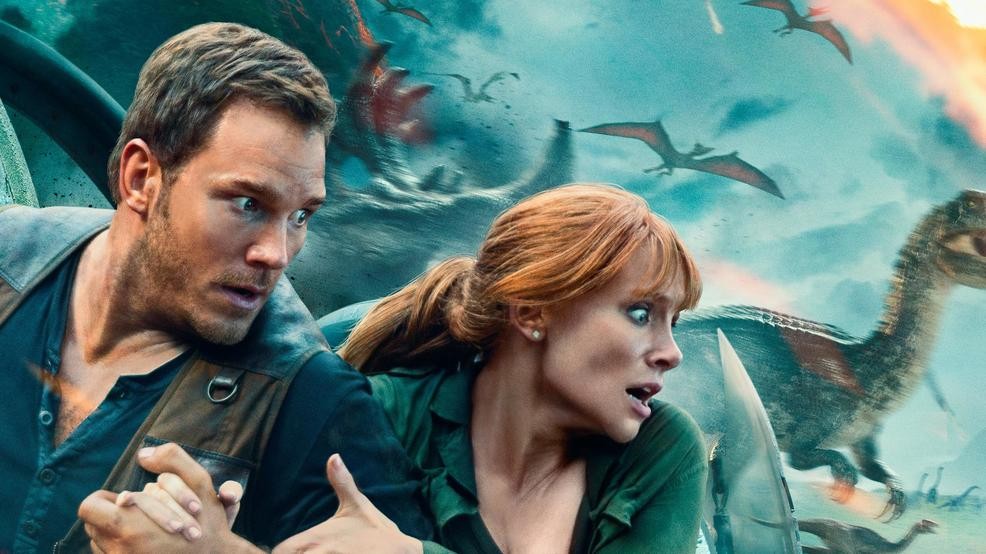 Review: It's ok to cry over imaginary dinosaurs in 'Jurassic World: Fallen Kingdom'

Then comes pandemonium in a handbasket.

It’s inevitable, and it’s been done before. The OG 1993 film and 1997 sequel that kicked off the franchise followed that exact nursery rhyme of a recipe. Here we are once more contemplating the dark and wicked consequences of messing with nature. This time, however, the antes are upped, and the morality tale isn’t hidden in between attacks by velociraptors and Ian Malcolm’s famous one-liners...

...but instead acts as the motivating factor in every second of the one-hundred-and-thirty-minute runtime.

In fact, the filmmakers are basically shoving it down our throats. Why? Is it just another set-up for the inevitable sequel to join the lot? Or is this something, in the current climate of our country, we need reminding of? That decisions made by those with power should be held to some moral standard and not at the whim of corporate and human greed?

Idk. That’s getting a little deep for a dinosaur movie.

Either way, this certainly isn’t what you may have been expecting when you bought your seat, but it still proves to be a fun-enough ride to warrant the ticket price.

In "Jurassic World: Fallen Kingdom", Isla Nublar, the horribly failed amusement park and setting of 2015’s "Jurassic World", is under fire. The island is literally expelling lava and ash that threaten the existence of the dinosaurs leftover from the botched experiment four years prior.

Claire Dearing (Bryce Dallas Howard) works for a campaign to save the beasts she once exploited. As the island nears extinction, things aren’t looking good for the cause until ailing millionaire Benjamin Lockwood (James Cromwell) and his right-hand man (Rafe Spall) seek Claire’s help. In order to rescue the condemned creatures, there’s one man they need Claire to get on board. Owen Grady (Chris Pratt), now living a life of seclusion, reluctantly agrees to return to the island, mainly to save Blue, the dinosaur he raised and the raptor-hero of the last film.

Enter the archetypal grisly headhunter sporting a Southern accent and khaki jungle hat. He and his crew escort Owen and Claire’s small team to ground zero. Naturally, things are not as they appear, and our stars are left not only fighting to survive, but battling the evil forces at work. If they fail, it may change the course of humanity irreparably.

It’s a distinctly new chapter for the Jurassic Park universe, and the tone attempts to reflect that, offering a handful of laughs – as most action movies post - "Guardians of the Galaxy" are required to do – amidst some very potent, intoxicatingly emotional scenes. In fact, a lot of the film is downright depressing, something I for one was not expecting of a studio summer blockbuster. The villains here aren’t the dinosaurs, but the humans with such diabolical plans, you cringe to find you’d take on the newest raptor-hybrid – the black-scaled indomitable Indoraptor – over Spall’s maniacal, greed-mongering antihero.

That being said, the first forty minutes creep by like molasses despite a fair amount of story progression and action. It moves us through the island in spurts with the main objective to get us back to Lockwood Estates as quickly as possible. This isn’t a problem, per se, except the island is familiar. We’ve been hardwired to associate a Jurassic Park film with the stunning location shots of some island in Hawaii. What follows back on the mainland is strange and novel.

Our leads, Howard and Pratt, are cutesy, charming and perhaps little else. They still haven’t managed to find the onscreen chemistry that will win them an MTV Movie Award, and though they may have been the lifeline of the first film, in its sequel they pretty much flounder for air.

The film is saved by Spanish director J.A. Bayona, best known for his stylistic wonders "The Orphanage" and "A Monster Calls". He adds a hefty touch of gothic whimsy in what would be an otherwise straightforward action flick. The rotating camera angles, the terrifically terrifying silhouettes of dinosaurs projected against walls, the elongated dino-fingers stretching across the screen, and the billowing smoke that serves one of the film’s most emotional bits give me *nerd alert* movie-goosebumps.

Don’t be fooled. This isn’t the feel-good movie of the year. It has plot holes and moments that make you roll your eyes at the characters and maybe sigh, “Oh, Hollywood.” But the filmmakers’ attempt at revitalizing the series and taking it in a wholly new direction is admirable. For the most part, it works.

And you may find yourself crying over imaginary dinosaurs. It’s ok. It happens to the best of us. I, for one, went home and hugged my dog a little tighter.