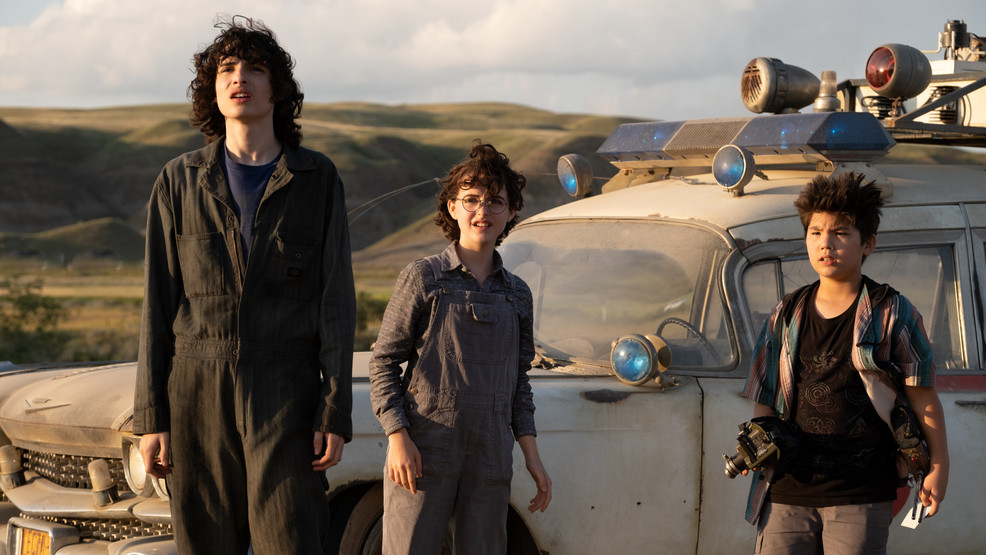 When the gender-swapping remake starring the who's who of comediennes, "Ghostbusters," released in 2016, audiences revolted — panning it as yet another example of Hollywood's unoriginality for the sake of a buck. Despite getting handled with care and, often, generosity from critics, the fans of 1984's "Ghostbusters" weren't going to let this one pass by without a hefty piece of their mind. The cult classic, written by its stars Dan Aykroyd and Harold Ramis and directed by comedy legend Ivan Reitman was, it seemed, something personal to those who loved the property.

Just five years after that stink bomb remake, Sony has entrusted a sequel to the nearly 40-year-old property (and its first sequel, "Ghostbusters II") with Jason Reitman, Ivan's son and a talented filmmaker in his own right. This "passing of the torch," as it has been referred to by the elder Reitman, as well as the nostalgia-heavy script co-written by the younger Reitman, makes "Ghostbusters: Afterlife" truly a family affair, wrought with everything you'd expect from a family reunion — namely too much nostalgia and not enough entertainment.

Dedicated to Ramis, who passed in 2014 and who starred as Egon Spengler, the bespectacled Ph.D. of the original troop, "Afterlife" picks up with Egon's estranged daughter Callie (Carrie Coon) and her children Trevor (Finn Wolfhard) and Phoebe (Mckenna Grace). Strapped for rent money and presented a chance to claim some kind of inheritance following Egon's sudden death, Callie uproots her family for podunk Oklahoma, where Egon was known as the "dirt farmer," a kind term locals used to identify the strange, aloof out-of-towner who came from NYC decades prior and turned his land into a haven for his apocalyptic premonitions.

Trevor and Phoebe, though skeptical, quickly assimilate into smalltownness. Trevor falls for a burger joint waitress Lucky (Celeste O'Connor), and Phoebe, who wears her grandfather's signature glasses and shares his affinity for social ineptitude, teams up with vivacious and loquacious classmate Podcast (Logan Kim) to investigate Egon's work.

The set-up is cute and clean, firming up and modernizing an old property with a flirty premise and hot young actors. Wolfhard and Grace, who began their acting careers at 10 and 7, respectively, are old pros at this point, selling Reitman's script to an expectant audience who want both the humor of the original but also a tagline of its own. The jokes hit well and often, escorting us through the set-up: Phoebe's discovery of Egon's purpose for staying in Oklahoma, the revelation that malicious paranormal beings are imminent and the introduction of Mr. Grooberson (Paul Rudd), who serves as Phoebe's summer school teacher, her mother's love interest and the bumbling comic relief.

At no point is "Afterlife" a hard watch. It's not only loaded with "Ghostbusters" nostalgia for fans of the original, but it syncs pitch with viewers' contemporary predilections. Wolfhard, with his prior work on "Stranger Things" and the "It" two-parter, further encourages associations to teenage 80s rom-drams, which is partially what Reitman attempts. What starts out promising, with intrigue and wit to spare, slows to a crawl when it should be ramping into Ecto-overdrive. It's like Reitman, a master chef in his craft, follows the recipe too perfectly, picking the most pristine vegetables and the finest cut meat, failing to take into account daring flavors and rogue additions that often set dishes apart.

Ultimately, "Afterlife" marinates a little too long in its quick-witted one-liners and fuzzy character development and sits on the grill a hair shy of medium-rare. We're left with a raw ending that doesn't make quite the impression the recipe promised.

However, thanks to Reitman's tasteful eye, "Afterlife" still offers quite a bit to munch on. When it does find its stride in the last 30 minutes, its full-circle peak hits at the heartstrings and sentimental mush that will have even the most lukewarm "Ghostbusters" fan tearing up. Because this film sets out to do one thing, and one thing only: to allow those still clinging to the original (however few there hopefully are out in the world, not just those who use it as an easy group Halloween costume) to feel like their characters have been done justice. It doesn't expand the universe by much more than a trip to Oklahoma. The setting may not be Manhattan, but the ghosts of 1984 continue to haunt this production and likely every sequel hereafter. Despite Wolfhard's and Grace's charisma, talent and draw, there is no one else we're gonna be able to call except the OG: Original Ghostbusters.

"Ghostbusters: Afterlife" is in theaters now.