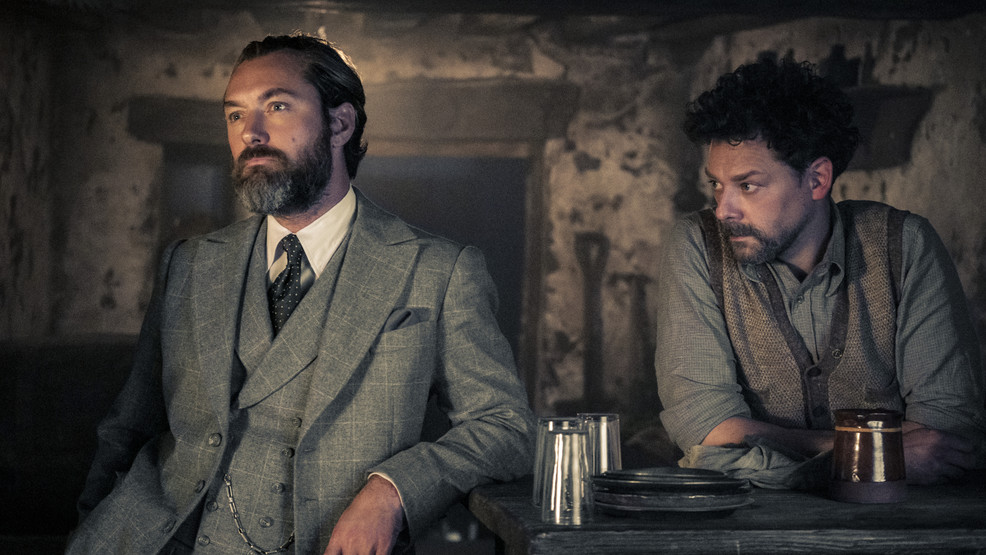 For a property with an endlessly enthralling stream of good guys, evil villains, history and magic, the "Fantastic Beasts" series, an off-shoot of the famed “Harry Potter” saga that spawned seven books and eight films, has been plagued and overshadowed by its off-screen drama that has made headlines the past several months. Between Johnny Depp’s ongoing legal case with ex-wife Amber Heard which led to his replacement in the series, JK Rowling’s public transphobic remarks, which have caused a rebellion within her fandom and Ezra Miller’s recent arrest following unsettling and seemingly unstable behavior, leading to a big question mark surrounding future involvement, it’s amazing "Fantastic Beasts" has come together at all.

From a screenplay by Rowling and longtime "Harry Potter" screenwriter Steve Kloves, "Fantastic Beasts: The Secrets of Dumbledore" looks to appease its fanbase by expanding the history of the property’s beloved and stalwart character, even if it is at the expense of the story and flow of action that is a staple of Rowling’s creation.

It’s no secret that, while the first installment, “Fantastic Beasts and Where to Find Them,” was a marvel of universe expansion, character development and expert storytelling, the last film, “Fantastic Beasts: The Crimes of Grindelwald,” was a jumbled mess of unrefined Potterdom. Its appeal was to fans who understood the intricacies of Rowling’s wizarding world, and now “Secrets of Dumbledore” upholds that tradition, which is to say this: it would be difficult to walk into this film cold, without any prior knowledge or deep familiarity with previous installments, and enjoy yourself.

That said, there is hardly a shortage of magical creatures and daring escapades. Albus Dumbledore (Jude Law) has set his sights on taking down famed dark wizard Gellert Grindelwald (Mads Mikkelson, Depp’s replacement) who has a powerful anti-Muggle movement brewing. Though he’s an outlaw, his face plastered on Wanted posters all over town, government corruption and well-placed allies threaten wizarding democracy and human safety. The relationship of Dumbledore and Grindelwald, long speculated to be more romantic than business, is at the forefront of this film, a dynamic only Rowling could foster and develop. That is, of all things that come from “Secrets of Dumbledore,” perhaps the most exciting element: fans are given what we’ve long-wanted, which is a full history of the Dumbledore family mysteries.

Albus isn’t the only Dumbledore with a complicated past. Credence (Ezra Miller), the orphaned obscurus who has threatened to destroy himself and everything around him when he inevitably implodes, is slowly unraveling his own roots, and as the son of Albus’ brother Aberforth (Richard Coyle), his hatred for his biological family keeps him doing Grindelwald’s sinister bidding. Newt Scamander (Eddie Redmayne), his brother Theseus (Callum Turner) and Muggle baker Jacob Kowalski (Dan Fogler) return and join forces with new face Eulalie “Lally” Hicks (Jessica Williams) to follow Dumbledore’s orders and undermine Grindelwald before he can steal the German Prime Minister seat and set further wheels in motion to start a full-blown war against the worlds: muggle versus wizard.

As with everything Rowling writes, the characters are rich and fully formed, and she continues to invent a wizarding world that expands with each installment. The magical creatures, which are the rooting feature of this series, are as mystical and impressive as ever. The Qilin, a horselike beast that can see into one's soul as well as into the future, is the featured creature this time around, the key to Grindelwald's master plan of world domination by harnessing its precognitive abilities. Fans of "Harry Potter" will spot plenty of parallels between Grindelwald and the universe's later supervillain Voldemort. Grindelwald is also operating during an era when the real-life muggle fight in World War II had a truly evil operation that has similarities with this wizarding one. Jacob becomes an obvious symbol of the oppressed, and his forbidden love with good-turned-bad witch Queenie (Alison Sudol) is at the heart of the film's series.

"Secrets of Dumbledore" could use another film altogether to fully dive into the complicated relationships and to iron out the political and emotional motivations behind some of the decisions made. There isn't a 900-page book to use as source material, so details fly across the screen, lost the moment they pass. There is humor, but the film primarily must trudge through action and reaction, the unveiling of Dumbledore history and a race to stop Grindelwald that produces more frustration than excitement.

"Fantastic Beasts: The Secrets of Dumbledore" is in theaters now.