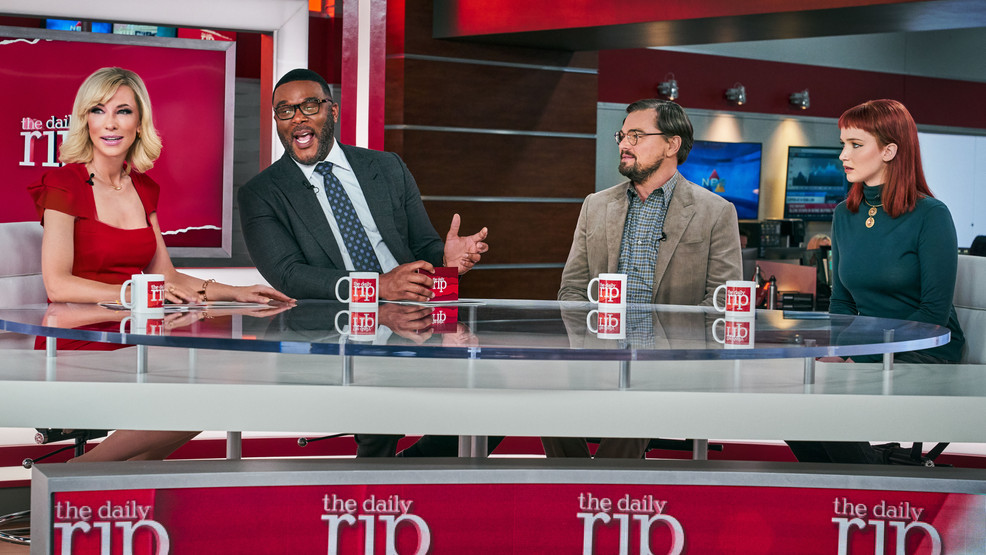 Review: 'Don't Look Up' borders on the absurd

When "Network" released in 1976, viewers were smacked with some nasty truths wrapped in a star-studded black comedy. The film lampooned the news industry's obsession with Neilson ratings and forced its very own audience to reckon with the widespread epidemic originating in the living room: callous, out-of-touch viewers whose primary interest was to be entertained at all cost and news executives willing to do anything for these consumers.

Peter Finch went on to posthumously win the Best Actor Academy Award for his shattering performance as news anchor on the brink of psychosis Howard Beale. If you haven't seen "Network" or know its iconic "Mad as Hell" sequence, then do yourself a favor and bump that up to the top of your must-watch list because "Don't Look Up," the new searing satire by writer-director Adam McKay, knows film history. Leo DiCaprio has his own "Mad as Hell" moment when his character Dr. Randall Mindy loses it on live television, spit foaming from his mouth and face reddening as he tries to convince viewers that the end of the world is nigh.

This is later in the film, however, after he and Ph.D. candidate Kate Dibiasky (Jennifer Lawrence), who discovered a comet was on a direct path for collision with Earth, have been spinning their wheels trying to convey the severity of what is about to happen. Their first attempt is through the highest office in the United States. President Janie Orlean (Meryl Streep), however, is an inept narcissistic leader. She wears predominantly red dress suits and hired her own imbecilic son Jason (Jonah Hill) as her Chief of Staff. Presented with an end-of-world scenario that is guaranteed to occur in just six months, she decides to "sit back and assess" the situation for fear of the political consequences should she bring it to light.

Red as a signature color, blatant nepotism and a distrust of science. There's no question who Janie Orlean is modeled after. In fact, the entire administration is an eerily familiar circus. When Dibiasky and Mindy try to warn the public and stir up a fervor that could force the president's hand into action, their television appearance with wide-grinning, talking head personalities Brie Evantee (Cate Blanchett) and Jack Bremmer (Tyler Perry) only highlights the country's sexism. They ridicule Dibiasky's emotional plea, pooh-pooh their message and get Dr. Mindy trending on social media as a sexy scientist.

It can be frustrating at times, watching as our straight leads weed through the folly — bordering on lunacy — of everyone around them. Like when their explosive discovery takes a backseat to the news that popular singer Riley Bina (Ariana Grande) has broken up with fellow high profile personality DJ Chello (Kid Cudi). Or when Peter Isherwell (Mark Rylance), a Silicon Valley tech magnate and hyperbolic rendition of Tesla's Elon Musk or PayPal's Peter Thiel, has the political clout and technical knowledge to blast the comet off its course but instead chooses to risk human extinction for the chance of monopolizing off the rock's natural resources.

Turns out, trying to help a world full of hyper-politicized lackeys is a fool's errand, a baffling and scream-at-the-void kind of mission that highlights society's blatant weaknesses and points heavy fingers at those in power. DiCaprio, who off-screen is one of Hollywood's loudest voices for climate change advocacy and green initiatives, has skin in this game, and finally, we can feel and see his frustration through Mindy. His own "Mad as Hell" moment is raw, reaching through the screen to cement the point that both he and McKay are trying to convey. It may be an errant comet that takes out the world one day, but in the meantime, the slow-moving, metaphorical shooting star is climate change, a hot, polarizing topic in the news and in the White House where bureaucratic interests handicap any action to fight.

"Don't Look Up" operates less in the gag-centric realm of slapstick satire ("Idiocracy" — though there are some comparisons to be drawn there) and more in line with a black comedy interested in scorching society's morbid obsession with image and fluffy pop culture, all while ignoring scientific fact just because a political affiliation tells them to. McKay, who found great success with his docu-style, informative fiction films like "The Big Short" and "Vice," both of which break the fourth wall to add levity and straight information to make his point, abstains from that style this time, almost to the film's detriment. The content is often too depressing to find funny or too outrageous to seem real, both of which are obvious objectives.

Because what we have with "Don't Look Up" borders on the absurd. It may feel like, at times, society is, in fact, as dull, ill-educated and easily manipulated as the film would lead you to believe, but the truth is much more complicated. Those on the right will surely condemn this as another example of liberal propaganda. It's hard to argue it's not, and though the film moves nicely, with stand-out performances by all mentioned (as well as Timothée Chalamet and Melanie Lynskey, who have the imperative job of being likable in a movie about terribly unlikeable people), it doesn't fit into any one genre box, making it hard to read and even harder to really enjoy.

"Don't Look Up" is in select theaters now and will stream on Netflix starting December 24.