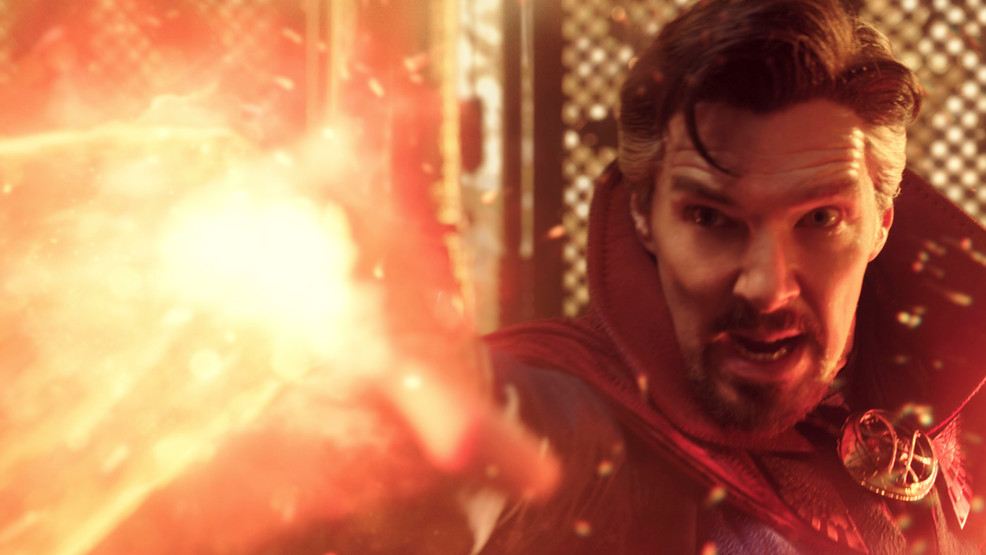 Review: 'Doctor Strange in the Multiverse of Madness' is a head-spinner

If you didn't know going into it that cult film director Sam Raimi was at the helm of "Doctor Strange in the Multiverse of Madness," it becomes quite apparent as the story unfolds. For one, these Marvel superheroes and villains yield and yearn for not one, but two mystical books with the power to unleash unholy destruction and chaos onto all the universes in existence. Then, as if to solidify its comparison to Raimi's first big success, "The Evil Dead," Doctor Strange (Benedict Cumberbatch) inhabits his own dead corpse (a Doctor Strange of another universe, if you can keep up) to stop the evil-wielding, otherwise unstoppable Scarlet Witch aka Wanda Maximoff (Elizabeth Olsen).

Part of his mouth has decayed off and the make-up is thickly applied to near comical effect, but there is such assured purpose behind this stint of supernatural horror that we don't laugh, except, of course, when Raimi wants us to. It is an earnest bit of hocus pocus that actually redeems the film from its shoddy mythos. For a moment, as the rising cadaver regains control of his fingers and cracks his bones back into place in anticipation of the battle before him, we recognize that this is Raimi's expertise and it is why this "Doctor Strange" sequel is such an unusual, frenetic entry into the Marvelverse, which is often defined by its clean, easily-digested narratives, however ultra-derivative they may be.

Raimi isn't a newcomer to the superhero film. He directed all three Tobey Maguire "Spider-Man" films from the early aughts. But much has changed in 20 years, and a Marvel film is a much bigger, more complicated beast than a singular superhero franchise. It doesn't help that "Multiverse of Madness" rests upon a shaky-at-best premise, one that jumps into hyperdrive from its opening frames. Doctor Strange, reeling in the emotional turmoil he feels by watching his former flame Christine (Rachel McAdams) tie the knot to someone else, finds a battle down the street to show off his heroically mystical abilities with the help of sidekick (but technically boss) Wong (Benedict Wong), the newly minted Sorcerer Supreme. Though the creature is quickly defeated, a young girl named America Chavez (Xochitl Gomez) and the beast's target requires some hardcore magical protection. Originally from another universe, America is able to travel the multiverse at will, a skill that Wanda is eager to suck out of her body to use for her own nefarious needs. (It behooves you to watch, or at least SparkNotes, "WandaVision," the 9-episode TV mini-series which establishes Wanda's journey to "Multiverse of Madness:" after Vision (Paul Bettany) dies at Thanos' hand, Wanda has a mental break, creating a fictional life for them which includes two young sons.)

These boys (Julian Hilliard, Jett Klyne) are at the heart of her mission here. There are plenty of plot holes, the least of which is how can two boys exist in other universes when Wanda had created them with her magic in the first place. But luckily, Raimi and screenwriter Michael Waldron provide enough momentum and flashy distractions to lift us up and over these hurdles of logic. It also helps that the multiverse, as defined by MCU, is ambiguous enough that its rules and stipulations won't be put under a microscope. The film tries to pass off Wanda's insanity as a result of the Darkhold, ancient sorcery that has monopolized on her immense grief to make her rash and irrational. She is a reluctant villain, and the audience is also reluctant to accept her as the film's main antagonist, given how loved she has been throughout the many other MCU films.

Like "Spider-Man: No Way Home," which found internet-breaking cameos by previous Spider-men Maguire and Andrew Garfield, there are some notable ones here too by off-brand MCU characters that, in true Disney/Marvel fashion, present potential expansion for their cinematic universe. As Strange and America traverse the multiverse - we see a wide array of "worlds," many of which make for a garish journey, like one in which everyone is made of paint, another in which everyone is cartoon animated, et cetera - they find another world containing a Christine who, unmarried and razor-focused on her work, helps in their final showdown with, you guessed it, yet another Doctor Strange, this one demented by the Darkhold in a universe that is crumbling in upon itself.

As if "Multiverse of Madness" didn't try to cover all of the universes at once, the film further expands its genre when the two Stranges battle in a pseudo musical number, flipping the film's tone for the umpteenth time and reinforcing its penchant for the absurd. This is when our Strange inhabits the body of the dead Strange, and the rest is Raimi history. Cumberbatch has had many films to work out the idiosyncrasies of his character, and at this point, the audience expects his heavy sarcasm and quick hand tricks. The character of America, however, feels underdeveloped and outshined by the film's other stars who have extensive history with audiences. She's along for the entire ride, but without any singular attention paid to her character, it never feels like she is more than a mule to carry the story through to its conclusion.

At no point is "Multiverse of Madness" a bad time. It's certainly lost in its madness, though it is also clinical in its take on battle scenes, for instance. As Wong and Strange fight to protect Kamar-Taj and the stowaway America who is freshly in their care, Wanda quickly and unceremoniously takes out the many Masters of the Mystic Arts without much fanfare. Strange spends so much time moving from one multiverse to the next, putting out fires and fighting dime a dozen battles, we're left exhausted and turned around by the film's climax, which is, ironically, where things come together for the director. His voice and vision break through the MCU requirements and red tape meant to appease the fandom and, finally, there is reason to the madness. But this "Doctor Strange" sequel, possibly the next great Halloween cult classic, will get many unintended laughs and eye rolls. The whiplash from the chaotic journey will have many hesitant for another "Strange" saga any time soon, in this universe or any others.

"Doctor Strange in the Multiverse of Madness" is in theaters now.