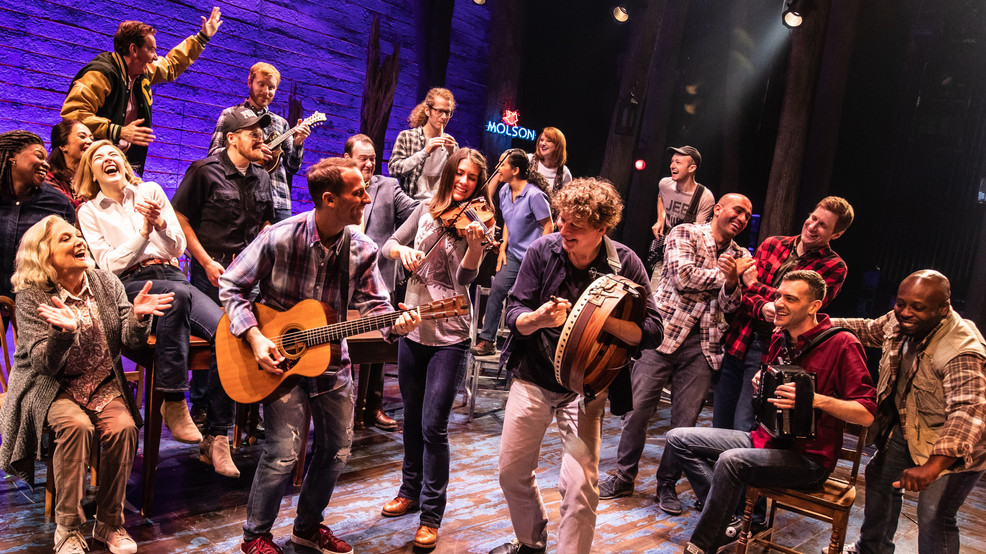 Image provided by Come From Away
SEE MORE

Review: 'Come From Away' at 5th Ave is powerful and personal

For many of us, it is a moment in time we will not forget. We remember exactly what we were doing and where we were that morning of September 11, 2001. Perhaps we listened in disbelief to our car radio on the way to work, or maybe we stared in shock at the news briefs on our television screen as we sat with a steaming cup of coffee, quickly going cold.

We all have a story to tell of that horrific moment the world stood still.

The musical Come From Away, currently on stage at the 5th Avenue Theatre through Aug. 7, tells an ensemble story about that day when so many people suffered a loss. Yet this true story is one of hope, highlighting what can be found in the face of adversity like connection, community, and simple human kindness. It hits all the feels.

The lights go up on a minimally set stage with 12 cast members milling about the center. This is Gander, Newfoundland on the morning of September 11, 2001.

Through the driving, earnest rhythm of the opening song, “Welcome to the Rock,” we are transported back to that morning, listening to the account of each townsperson on where they were when they heard the tragic news. Everyday people going to work, getting kids to school and living an everyday life. Soon, these everyday islanders, the townspeople of Gander, became extraordinary heroes, when they learned that 38 airplanes, from flights around the world, were about to land at their airport since U.S. airspace had been shut down.

The population of approximately 6,000 islanders living in Gander jumped into action, preparing every school, gymnasium, community hall, church, and even the local hockey rink to house and serve all the passengers on those planes, many of whom did not speak English. The townspeople made enough food to feed close to 7,000 “plane people” as they are called in the show.

The population of Gander doubled in one night. The islanders of Gander opened their hearts, their homes, and their doors to complete strangers offering them safe harbor while asking for nothing in return.

Strangers, the plane people, who were stuck inside the planes for hours, became anxious and frightened. They were completely unaware of the day's events nor what was happening, why they landed in a foreign country, or where the heck they were.

Cell phones at the time were not widely used by everyone and the only thing on the passenger's minds after disembarking was to phone home. They craved connection with their loved ones but soon learned the connection made to the citizens of Gander became just as important. A few of them even became honorary Islanders as depicted in the pub one night when the whiskey is flowing.

As for the planes, they were grounded for five days.

The 12 cast members artfully and seamlessly draw us into the lives of the Islanders, as well as the plane people. Through clever choreography and use of chairs, one minute we are inside a school gymnasium while the next is onboard the plane or riding on a bus.

The actors, playing a multitude of roles, move from character to character just as swiftly, donning a hat, shirt, or scarf to transform themselves while melting in and out of the scene as necessary. Everyone is imperative to the storyline and is on stage throughout the entire 100 minutes. There is no “star,” for this ensemble shines collectively together, representing a community. The underlying message: We all need each other.

Come From Away, is a hopeful, heart-warming story. It also unapologetically shares the stories which bring out the sometimes harsher truths of humanity. We hear the gay couple express concern over being too visible in a small, unknown town. We witness the Arabic chef, Ali, enduring humiliation and skepticism from his fellow plane mates and the undercurrent of what became Islamophobia.

In its quiet braveness, the show depicts how 9/11 changed the world. Through the stories of the Islanders and plane people, we also come to terms with how it changed us.

Come From Away does not shy away from the truth of these dark events. It is a story reminding us that connection and kindness to those in need is the antithesis to the events of that day. A message just as relevant in this moment.

For you are here - on the edge of the world - where the river meets the sea.

As they say in Newfoundland, "There is a candle in the window, and you will find the kettle is always on."

Pro Tip: Bring a good supply of Kleenex for those moments your heartstrings are pulled, or yanked. (And they will be). And bring a mask, for the 5th Avenue Theatre requires proof of vaccination or negative Covid-19 test, and masks to be worn inside the theatre at all times.

MaryRose Denton is a freelance writer for Seattle Refined. While the products, services and/or accommodations in this story were provided without charge, the opinions within are those of the author and the Seattle Refined editorial board.