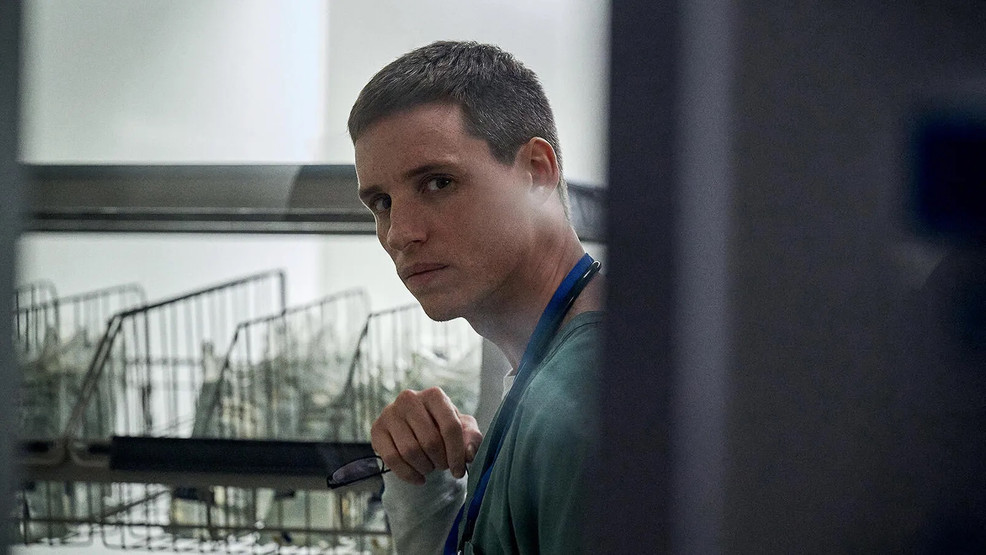 Review: Chastain and Redmayne shine in darkness of 'The Good Nurse'

In Danish writer-director Tobias Lindholm's newest film, the tone — dark, quiet, perverse, unsettling, and horribly captivating — usurps all. Though set in a New Jersey hospital, gone are the fluorescent lights one might associate with sterile hallways, replaced by dim recesses of nurse's stations and moody glow of bedside lamps. In the opening scene of "The Good Nurse," Eddie Redmayne's Charlie Cullen watches, grimly transfixed, back against the wall and shadows playing on his face as offscreen one of his patients dies despite the life-saving measures performed quickly by the doctors flooding into the room. Redmayne is known for his quiet, subtler performances, and he tackles Nurse Cullen, based on a real person, with that same delicate, understated sensibility.

After all, "The Good Nurse" is a grisly true crime tale, an almost Aesopian story of a wolf in a nurse's uniform and the flawed system that allowed his transgressions to endure. There is no mystery that something is amiss with Cullen, and the film focuses less on the murderer or even the murders themselves than on how he was stopped, thanks mainly to Jessica Chastain's Amy, a friend and coworker of Cullen who worked with detectives (Nnamdi Asomugha, Noah Emmerich) to uncover the horrific reality about the unassuming nurse.

A single mother dealing with cardiomyopathy, a heart condition that leaves her dizzy, short of breath and hardly able to do her physically intensive job, Amy has plenty on her plate. She can't get the lifesaving surgery she needs until she's worked at the New Jersey hospital a little longer, thanks to insurance red tape, even when being on her feet all day is starting to take its toll. She can barely pay for the babysitter and isn't showing up as a parent in the ways her pre-adolescent girls would like. Charlie, a mild-mannered father and divorcé, enters her life at just the right time, giving Amy the support at work and in her personal life that she didn't know she needed.

Set in 2003, "The Good Nurse" is as much an indictment on the healthcare system and its crooked bureaucracy as it is on Cullen himself. He had been allowed to move insidiously through hospitals, taking out as many, it is estimated, as 400 people without so much as a mark on his record. Amy, the titular "good nurse," has no support from her workplace in the face of a serious, potentially fatal disease, struggling every day to do a job and help others. In contrast, Charlie is given incredible leniency and freedom in the face of the atrocities he's inflicted. Both Lindholm and screenwriter Krysty Wilson-Cairns have something to say about that paradox.

Lindholm's eye for quiet moments jives with a low-dialogue script by Wilson-Cairns. The leads, both Oscar winners, are given plenty of psychological fodder to chew on, and their reserved performances bear enough emotional mass to give the story a weightier relevance. There is certainly a thriller hiding beneath the layers of sidelong looks and brooding tension, but there is not enough action or dynamite revelations to warrant a soaring review in that department. Those looking for a Denzel Washington medical suspense mystery with a shoot-out in the end will be sorely disappointed. The power of the film lies in the mighty performances of Chastain and Redmayne, who can make even medical malpractice an engaging, electric account.

Their odd chemistry is undeniable, and his attentiveness to her physical health makes the audience also second guess where this story is actually going. But there is no happy ending. Patients without life-threatening afflictions begin to inexplicably code at alarming rates, and the rumor about Nurse Charlie that circulated at his previous places of work starts to breathe fresh life at Amy's hospital, too. He's been employed at something like nine hospitals in just a couple years, each one offloading the harbinger of death without punishment, eager to remove the liability from their hallways only to send him back into the world to kill elsewhere.

As Amy comes to the realization that Charlie is not only capable of the horrifying acts he's accused of, but likely guilty, she will do whatever it takes to prevent him from killing anyone else in the future. Amy works with the detectives to narrow down his mode of murder - insulin shot directly into IV bags - and corner him into a confession, a scary performance by Redmayne who does unhinged almost too well. The ending may feel a bit underwhelming for those hoping for a dramatic, on-the-lam response by a deranged Florence Nightingale, and there is certainly no question at any point that Charlie will not be redeemed by the finale. But something sinister lurks around every frame of "The Good Nurse" and it is the waiting in muted suspense that proves the most entertaining.

"The Good Nurse" is streaming on Netflix now.