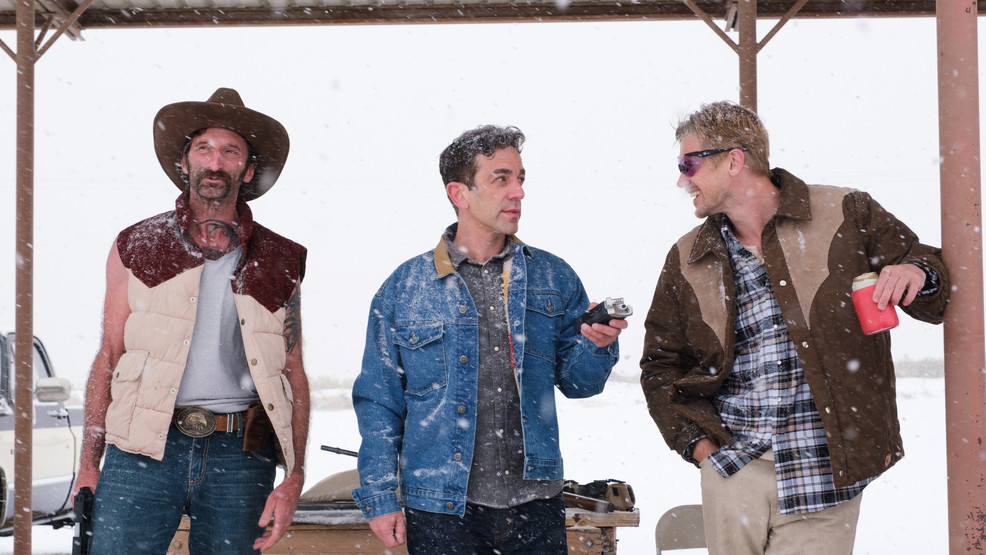 In "Vengeance," the arrogant podcasting city slicker gets hit by a bull-riding shock of cultural differences when he pursues a story in small-town Texas. There are the moments you'd expect from east meets south; writer-director-star B.J. Novak affably noms on a "Frito Pie" (chili eaten with a fork directly from a bag of Fritos) and unwittingly cheers for the wrong Texas university at the local rodeo. But the heart of Novak's directorial debut seeks to tell a slow-paced murder mystery aimed at bridging the gap between Texas and Manhattan while exposing the dirty truth about America at large: people are people wherever they live and their deep-rooted, socio-political problems transcend geographical stereotypes.

The issues under the microscope here are particular to this country's daily headlines, namely guns, opioids and misogyny. From the perspective of a white man who has spent a career in Hollywood and metropolitan areas, the film mimics Novak's own surprise at discovering there is more to small towns than he's been led to believe by NPR. His road to discovery is prompted by the untimely, suspicious death of a former female acquaintance and aspiring singer Abilene Shaw (Lio Tipton). For reasons not totally made clear, apart from feeling called to seeing it through, Ben (Novak) travels to Texas to attend her funeral where he learns that his low-key hook-up situation with Abilene possibly meant much more to her. His cold, New Yorker heart is intrigued by the family-first mentality that the South embodies.

In the film's funniest bit, its opening scene has Ben whiffing about women and dating with his friend John, played by notorious heartbreaker John Mayer, and the banter is single big city player at its most satirical. From there, "Vengeance" turns introspective as Ben, a character that is hard to shake from Novak's turn as Ryan the temp in "The Office," tries to make a name for himself in the podcast world. Issa Rae brings some class and humor to Eloise, a sorely underdeveloped podcast executive placing the pressure on Ben to record something great. Ashton Kutcher also appears on screen as Quentin Sellers, a hippie cowboy music producer. His small operation is surprisingly thoughtful and productive, and his persona is largely unsettling.

Though Novak attempts to prod insight and thoughtful provocation in Ben's scenes with Abilene's family - Boyd Holbrook as Abilene's brother is handily the shining star amongst the crew - the jokes about their Home Goods word art (you know, "Live Laugh Love" and the like) or their unconditional, irrational love for Whataburger burn the moment they hit the concrete. Sure, Novak is poking fun at both demographics, including himself, but playing up the cliche of the "stupid Southerner" will always be, intentional or not, a deeper cut than pointing out the fact that guys on the coasts get a lot of girls, which is self-deprecating like a shot of water. Smooth to take and no lasting consequences.

As Ben digs deeper into Abilene's mysterious overdose, he learns that perhaps the country is connected by more than interstate highways. Yes, that's a corny statement, but even corny would be more interesting in this film. Instead, "Vengeance" is a dish that is as cold as the corpse at the heart of the story. Ben grows an unusually quick attachment to Abilene's family, who take him in as the last thread connecting them to their recently departed. "Dead White Girl," the fictional podcast Ben curates in the same vein as "Serial," allows Ben to monopolize on the death of someone he hardly knew and, frankly, didn't care for, filling airtime with color around a family, a town and a way of life he doesn't understand. Worst of all, he fails to give Abilene a name, relegating her in death to a catchy title. The film, which attempts to satirize the objectification of women, merely feeds into its existence.

To say it misses the emotional mark is easy; "Vengeance" and Novak take an admirable jab at exploring topics that are far from clear and simple. Much like his character, Novak makes a real attempt to go outside his comfort zone. It would have been perhaps far easier to pull a Woody Allen and tell another story about New York City in the fall. The intention is there, but unfortunately, it gets lost in the dry Texas haze, quartered and boiled alongside the fried Twinkies.

"Vengeance" is in theaters now.