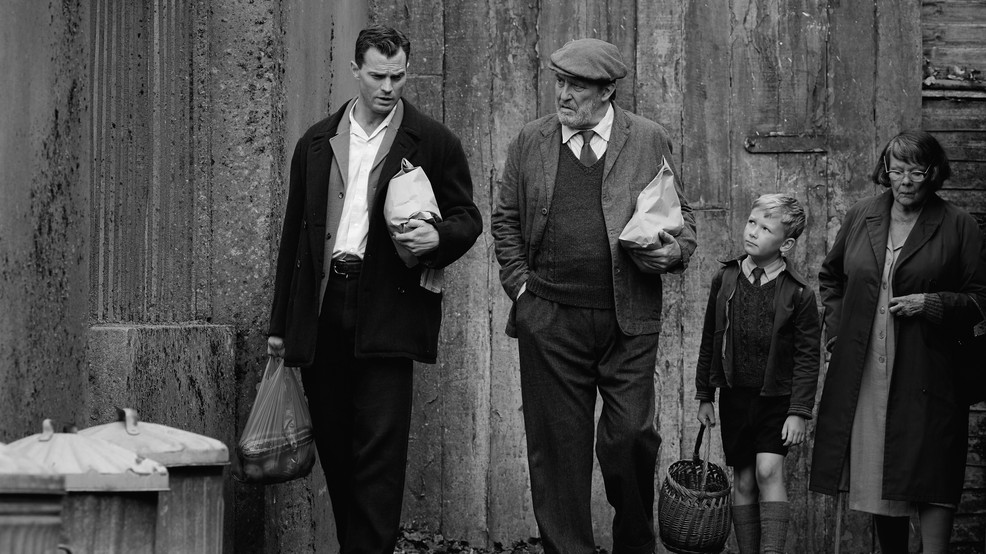 Review: 'Belfast' is a poetic note to the city itself, advocating for understanding

Even without context, it is immediately obvious that the new film "Belfast" is a personal one for filmmaker Kenneth Branagh. The acclaimed British thespian who began directing films over 30 years ago takes audiences back to his tumultuous childhood in Belfast, Northern Ireland, where, in the 1960s, a period of furor known colloquially as The Troubles began. It was primarily political and nationalistic — a conflict between "Protestants" who wanted Northern Ireland to remain part of the UK and "Catholics" who wanted it absorbed into the Republic of Ireland.

When he was nine, Branagh's family moved to England, fleeing from the growing, unending violence between neighbors. It's taken him over 50 years, but now the writer-director is processing the events that completely curved the trajectory of his life with a film that is many things: a romanticized remembrance of a childhood filled with love and rife with imperfections, a personal view of an important time in history, but most importantly, a poetic note to the city itself and the people he left behind.

The premise is small in many ways, narrowing in on the experience of one working-class family as they struggle to move away from their home for reasons of safety, security and opportunity. Branagh casts his 10-year-old shadow, child actor Jude Hill, to star as Buddy, the film's heart, soul and perspective. His tuft of blonde hair and toothy, innocent grin propels us through "Belfast." His youth is multifunctional; we laugh in the light moments, when the film's song track, exclusively featuring eight classics by Belfast-native Van Morrison as well as a new one the singer wrote specifically for the movie, highlights the happy times the city and its residents cherished, despite such upheaval. We also guffaw at Buddy's exposure to brutality and suffering.

Hill's wide-eyed wonder not only pulsates off the screen but pulls us into it as well. He is a typical pre-pubescent kid. He steals candy from a local shop but is instantly discovered and forced to make reparations. Buddy also discovers the incredible power of the movie theater, where he guzzles in "Chitty Chitty Bang Bang" with entranced wonderment. He crushes on the smart girl in class and plays knights and dragons in the street with the neighborhood kids.

The Troubles open our film with a beautiful, heartbreaking sequence of explosions, fear and malice, but it certainly does not define it. Buddy's block is now on round-the-clock watch for rioters, a constant reminder of the reality many families faced at that time. Buddy's family is Protestant, but he still struggles to understand how his "side" can be right when the men intimidate his father in attempts to join their mob and Buddy's own alliances waver independent of affiliation.

His school crush is Catholic, as are most of his friends on the block. Branagh makes it clear this isn't a division by religion (he mocks the fire and brimstone, for-profit teachings of the Protestants in a particularly satirical sequence). The film is not about sides; it's about the corner that hard-working families were shoved into thanks to the minority of violence-seekers. It advocates for understanding.

Hill is accompanied by a cast of acclaimed actors with Irish roots: Caitriona Balfe as his stressed, practical Ma; Jamie Dornan as his gambling, frequently absent Pa; Judy Dench as his spit-fire Granny; and Ciarán Hinds as his adoring Pop. The chemistry of the family and its skilled actors allow the film to make the impact it intends: we feel for Buddy's parents, trying to make ends meet, each struggling with their own choices and decisions; for his brother Will (Lewis McAskie), who is less sheltered from the pressures to fight than Buddy is; for his grandparents who must watch their children and grandchildren move away.

Branagh is tender, both in his writing and direction. "Belfast" never feels any one emotion for too long, the good or the bad. Shot in black in white for most of its runtime, the film casts no judgment on the conflict, making it clear that the casualties, apart from the lives lost, are the families torn apart. Buddy's, like Branagh's own, eventually decides to emigrate from Belfast.

As it must have been for Branagh himself, Buddy is also a victim of the discord. He loses his innocence when they board the bus to the airport. Belfast will always remain, in the memories of those who once loved it, of those who still reside and now immortally in film made by a son looking to come home.

"Belfast" is in theaters now.