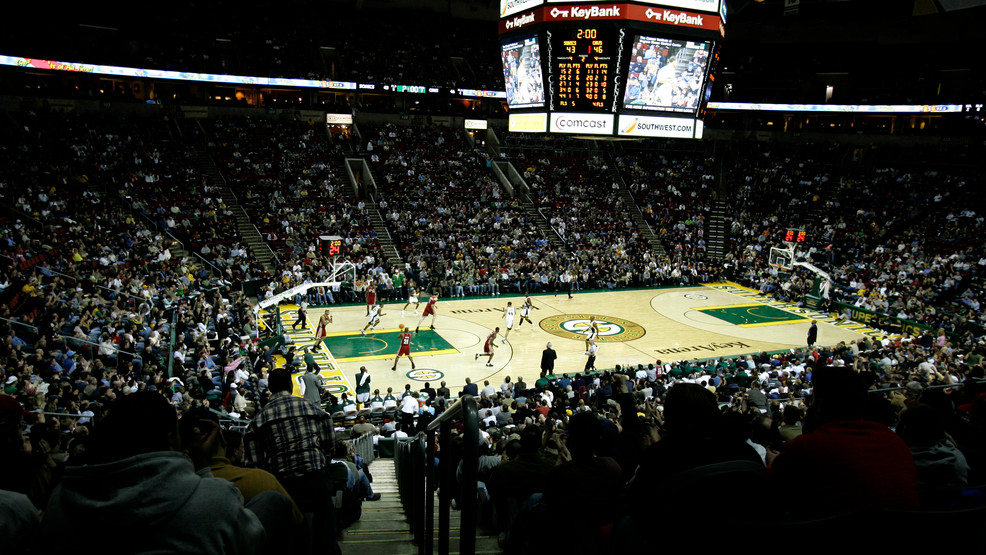 FILE - In this Jan. 16, 2007 file photo, the Seattle SuperSonics play the Cleveland Cavaliers in an NBA baseball game at KeyArena in Seattle. KeyArena is getting an appropriate send off Friday, Oct. 5, 2018, with an NBA game being played once again under its roof as the former home of the SuperSonics will see the Golden State Warriors meet the Sacramento Kings in a preseason game. Afterward, the building will be shuttered and remodeled. (AP Photo/Ted S. Warren, File)
SEE MORE

No, not the Sonics. Not yet, at least.

An official announcement was made Wednesday, live from Climate Pledge Arena, the Portland Trail Blazers and Los Angeles Clippers will play a preseason game on Oct. 3 in the Emerald City.

Tickets go on sale for the "Rain City Showcase" on July 6.

There are several Seattle connections between the two Western Conference foes. The Trail Blazers are owned by Jody Allen, the Seahawks owner and sister of Paul Allen, who died in 2018 and left her both teams. The Clippers are owned by Steve Ballmer, the former chief executive officer of Microsoft. Both live in the Seattle area.

According to an LA Times report, Portland coach Chauncey Billups and Los Angeles coach Tyronn Lue, best friends since they were teenagers, came up with the idea in an attempt to spend time together before the regular season begins.

Seattle last hosted an NBA preseason game in 2018 — between the Sacramento Kings and Golden State Warriors — before KeyArena was transformed into Climate Pledge Arena.

The Sonics were relocated to Oklahoma City in 2008 after being sold by Starbucks CEO Howard Schultz to a group headed by Oklahoma City native Clay Bennett.

Leiweke's group announced it was also building an arena designed for basketball in Las Vegas. Rumors have swirled ever since that the NBA will soon announce it is bringing expansion franchises to both Seattle and Las Vegas.

In a March phone interview with The Seattle Times, Leiweke said the following:

You more than anyone know we never get ahead of the commissioners. The decision on if and when the NBA will expand is up to (commissioner) Adam (Silver) and the 30 team owners. But if those owners decide they want to expand, we believe Seattle will be in good shape with the arena there. And Las Vegas will be in very good shape as well with this project.

"Welcome to the world’s most beautiful arena," he said with a smile.

“It’s apparent to anyone that knows Seattle what a great basketball city we are,” Harrell said.

“When I was a kid, the Sonics were everything to me,” said Crawford, who told stories of his time working at KeyArena as a teen.