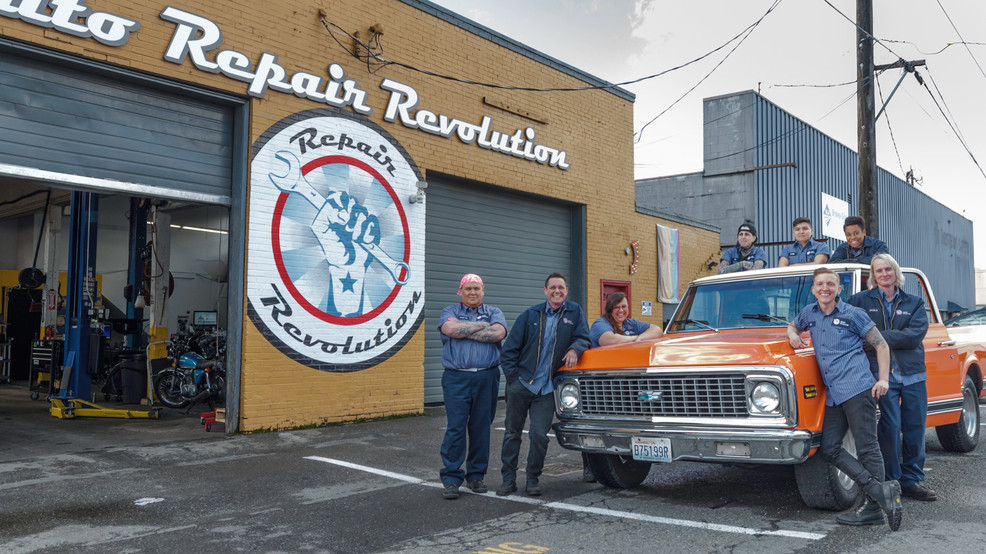 It’s been just under 10 years since Eli Allison opened Repair Revolution in the SoDo neighborhood. The place is easy to spot – festooned with a Pride flag, Black Lives Matter banner, and a bevy of inclusive stickers. You know on entrance that no matter who you are, you will be welcome here.

Allison was always a gear head. Socialized as female, they loved cars and could do their own basic maintenance on one most of the time. Sometimes, things were beyond their ability, and going into a typical repair shop left them feeling taken advantage of, and in one case, out $3,000 for an improperly repaired head gasket. It was that event some 15 years ago that led Allison to shift careers, from working in non-profit organization to starting school and an apprenticeship in auto mechanics.

Still presenting female at the time, Allison was one of two women in the program. Most of the others were 18-year-old kids, some interested in auto mechanics, some less so. Most were mildly misogynistic, they recall, but not dangerous. The apprenticeship, however, was a different story. Allison left from school at 2 p.m. five days a week, and worked the apprenticeship until 10 or 10:30 p.m. every night.

“It was much more overtly harassing, and scary at times. It was hard to deal with all the ignorance and impertinent questions,” they say. “It wasn’t pleasant, so I just kept my head down and worked twice as hard.”

After they finished school, Allison thought about leaving the industry but the idea of creating a shop where people like them would feel comfortable – as workers or clients – won out. It took several years during which Allison worked as a mobile mechanic and did side hustles as a professional organizer to come up with a location and funding. It came together in 2011 when Allison found an ally at the Seattle Department of Economic Development who led them to a lender. The funding was about a third of what Allison wanted, but they went for it and spent months working in less-than-optimal conditions in the way of tool inventory and no other staff – parts running, service advisor, mechanic, and all the administration that went with opening a business.

“It was extremely hard work but so much better than working in a toxic environment.”

People Allison knew from the queer community came to Repair Revolution to get their car fixed, and through that network, Allison found the first Repair Revolution apprentice. Other staff has come from across the country having heard about the shop and its welcoming atmosphere to all.

“This model doesn’t exist elsewhere. We don’t have to advertise. Word of mouth does it all.”

Allison has, like other businesses, lost staff during the pandemic and there was already a shortage of qualified people to work in the auto mechanics industry as a whole. Costs have increased in the 18 months, they say - a box of gloves that cost $7 in 2019 is $30 now, and they use many pairs to prevent cross contamination. They have spent money on PPE and had to devote precious time of overworked staff into disinfecting cars before and after servicing. They stayed open as an essential business, but used the slowest months to double down on training and maintenance of equipment. PPP loans and some rent forgiveness were important in the shop staying viable, but the real savior was that loyal clientele.

“The community is here for me," said Allison.

In a way, Repair Revolution is a victim of its own success. A loyal clientele and a staff and apprentice shortage mean clients can wait a while for regular maintenance appointments. Allison would like to see more emphasis on non-academic training opportunities for youth. Being a mechanic is rewarding, they say, and makes use of more than just motor skills (pun intended). Computer programming and networking, electrical knowledge, and figuring out what’s wrong with newer vehicles when manufacturers refuse to share information and diagrams are all job requirements. It is a job that changes as cars change.

Allison preaches the gospel of looking beyond a four year university for a rewarding job that is somewhat resistant to vagaries of the economy.

“It’s a great career path. You only have two years of school, and although there is a big investment in your own tools – I spent $10,000 on baseline tools when I started – you can use student loans for it, and there are student discounts,” they said. “It’s not just fixing things with your hands. It is as complex as being a doctor. It is very rewarding.”

Want to support more small businesses like Repair Revolution? We're proud to collaborate with Intentionalist, an online guide that makes it easier for you to find/connect with diverse local businesses owned by women, people of color, veterans, members of the LGBTQ community, and people with disabilities.