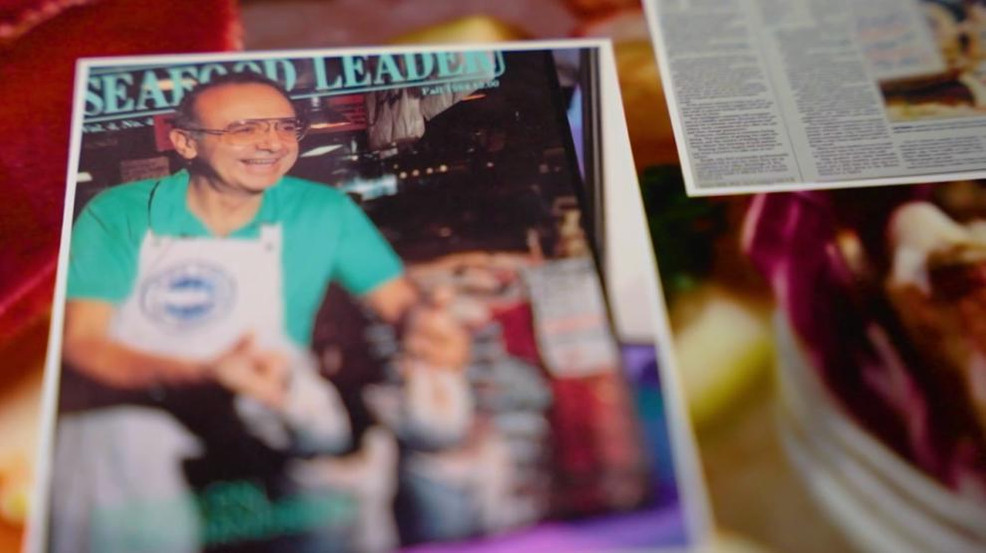 Solomon "Solly" Amon never wore a crown, but at Pike Place Market, he was unquestionably a king.

"He is known as the Codfather and the King of the Market," said Carlee Hollenbeck, Amon's granddaughter.

"He was part of every aspect of it. He was the focal point of the Market. He was somebody you knew was going to be here," said Mike Osborn, owner of Sosio's Produce.

For more than 60 years, Amon ran Pure Food Fish Market, never slowing down. At one point, he was the oldest vendor at Pike Place at 90 years old. Inside what can only be considered an iconic slice of Seattle, Pure Food is itself an icon.

"It's the institution of fish markets down here. It's been here the longest. Solly is the guy in the market," said Osborn.

Amon and his father Jack bought the business back in 1956. By that time, Sol had already been a Market man for decades.

"(Sol) and his dad owned part of Pike Place, originally. They sold that and bought (Pure Food)," explained Matilda "Tillie" Amon, Sol's wife. "Solly did everything. It was really his place... but he loved it. He really did."

Amon's love for the Market stood the test of time. As did his love for Tillie, his wife of 68 years.

"We never fought. Can you believe that? In 68 years, we really never had a fight. Sometimes disagreements, but nothing we couldn't settle right away," said Tillie. "One thing he always said, we could never go to bed without a kiss. That was number one."

At home, Amon was mild-mannered; but at the Market, he was the consummate showman. His granddaughter, Carlee, keeps things running just the way he wanted it.

"(My grandpa) wanted an experience when you came in," said Carlee, pointing out Pure Food's crab wall and array of fish. "He wanted you to walk in and see the salmon, see our fresh variety of fish, our smoked salmon, to see everything we had to offer. He thought that was more captivating and welcoming."

"He loved being down here, being in the action. He loved just to meet people and hear their story."

Like so many businesses at Pike Place Market, Pure Food Fish is a family business. In Amon's eyes, his employees were members of his family.

"I was just fresh out of the Coast Guard. I didn't have a job. I was just walking through the Market and two of the guys who worked here said, 'Hey, why don't you come check out Pure Food?'," said Richard Hoage, a Pure Food employee for 40 years. "I said, well I know nothing about salmon or sharks. I don't know the difference. That's how I met Solly."

"Pure Food wasn't a job to me at all, but it was very rewarding. I met people from all over the world and (Sol) was always right there to stand by my side and make sure I did things right. He was like a father to me."

While some employees were Pure Food lifers, others branched out. Osborn started working for Amon when he was just 14. Now Osborn runs nearby Sosio's Produce, another staple at Pike Place.

"Solly was a father figure, a mentor. He taught me everything about business and what I didn't want to be in business. Solly wasn't perfect. There were some things I didn't want to be and I learned that, too. I hopefully made myself into my own thing, but all my roots are from him. He just... he means a lot to me."

And yet, Amon's spirit still reverberates off the walls of the Market. A banner with his photo hangs inside Pure Food Fish Market now, allowing him to continue to welcome folks in with a warm, playful smile.

"My grandpa, you'd always know when he was here," said Carlee, looking up at the photo of her grandfather. "It's a weird feeling to not have that after you're so used to it. We've had guys work here for 20, 30, 40 years and they're used to seeing him. So, it's just nice to have a photo of him and to have something that (allows us) to see him every day. We can reminisce and customers can come in and look at it and share a story. It's just like he never left."

Carlee and her cousin Isaac Behar run Pure Food Fish now. They are the fourth generation of the Amon family at Pike Place Market. On April 11, they welcomed back family, friends and former employees to celebrate Sol Amon Day.

"Sol Amon Day came about on April 11th, 2006 to celebrate my grandpa's 50th anniversary of running Pure Food Fish," explained Carlee. "So, my cousin and I came up with this idea to create the Solomon Amon Entrepreneurial Fund. My grandpa always believed that people just need help getting their start. So we developed the fund and, every year, the first $15,000 will go to that fund to help new business owners in the Market."

"That's really what I'm making Sol Amon Day about. It's not just his history, his legacy, who he was, but it's also our family and what Isaac and I can do to contribute to the Market in carrying on his legacy."

The King of the Market may be gone, but it's clear his legacy as the Codfather lives on.