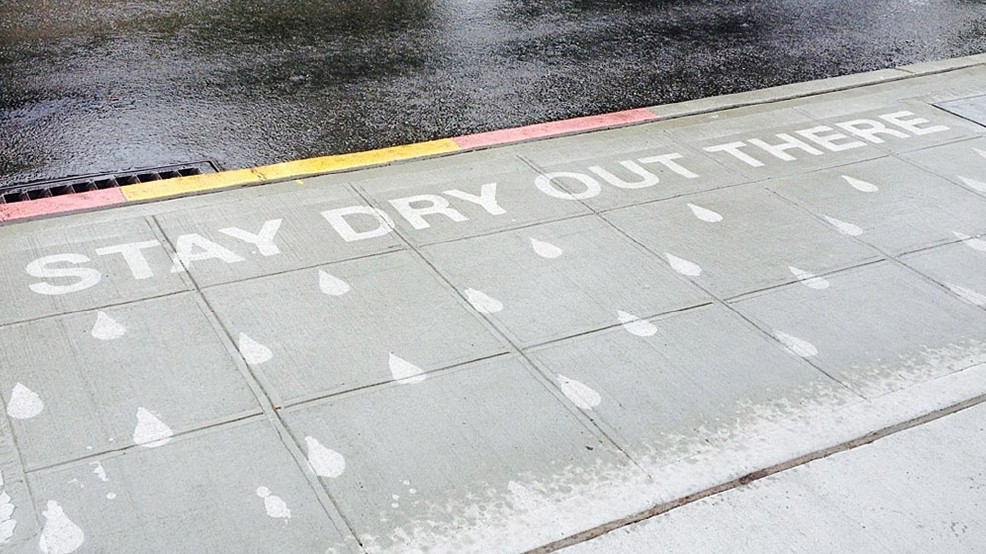 If you're on social media, you've most likely seen the Rainworks video. It circled all the platforms this weekend, and had all of us in the Pacific Northwest joyously sharing.
SEE MORE

Rainworks brings positivity and smiles along with the rain

If you're on social media, you've most likely seen the Rainworks video. It circled all the platforms this weekend, and had all of us in the Pacific Northwest joyously sharing.


Hey - anything that puts a positive spin on the Achilles heel of this city, rain, is worth celebrating. Especially to those out-of-town friends and family who refuse to visit between October and May.


For those unfamiliar - Rainworks are positive messages and artwork that appear on the ground throughout the city when it rains.

"I started doing this almost exactly a year ago," said Peregrine Church, the founder/creator/mastermind behind the project. "I've always been interested in novel ways to make the world a more interesting place."


Church first got the idea when he saw an advertisement for a water-repelling spray online. He tested it and other superhydrophobic coatings out on the pavment, and chose the one that worked the best: Always Dry Wood & Stone.


"The first test I ever did, I made with Never Wet, a product that doesn't work very well," said Church. "It was just a simple heart."


But it was this drawing is what he submitted to The Awesome Foundation, who gave him a grant of $1,000 to pursue his Rainworks art.


"They have chapters all over the country," said Church. "They give $1,000 to a person or something they think is awesome, no strings attached."


From then on the ball starting rolling faster and faster as Church and his "co-conspirators" Xack Fischer and Forest Tressider starting creating more and more art throughout the city.


Some are drawings, some are motivational saying, some are just funny. And all of them can only be seen when it rains.


Touché. Next time there is a rainy day, we're going on a scavenger hunt to find all of the Rainworks in the city. They're helping people out with a complete map of where to find them.


With the city and the park department behind him (Rainworks are temporary and non-commercial), Church hopes to continue doing this full-time.


"This is sort of turning from a fun thing into a business," he said. Right now he's working on a commissioned project for an assisted living facility in Lynnwood.


For most people job stability is hard to come by - but we're thinking as long as Church stays in Seattle, and has a medium based on rain....he's set for life.


And, as one of his Rainworks pieces says: 'We're Proud to be Rainy."