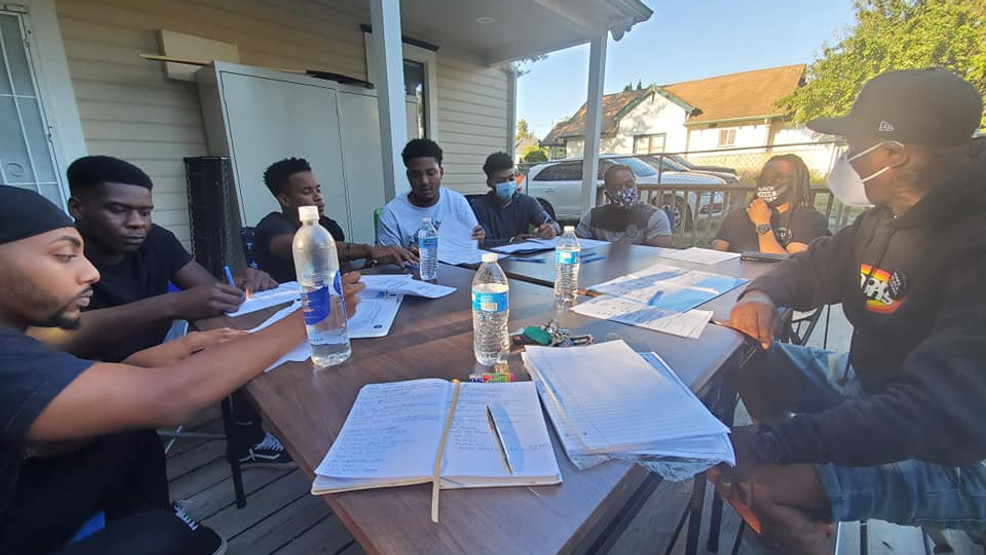 Pushing for Progress, No Matter the Circumstance

Coy Graham and Eddie Purpose have plenty of motivation behind the work they do at Progress Pushers; not too long ago, they were in the same shoes as their youth mentees. Both committed crimes at 16 years old and started serving their 10+ year sentences as teenagers. Years later, they now advise at-risk youth to deter them from getting tangled in the system.

“Once the system has their hooks in you, it's hard to get unraveled from that," said Graham, VP of Progress Pushers.

Progress Pushers, founded in 2018 by Eddie Purpose, is based around the national Credible Messengers model. Originally created by Eddie Ellis in New York, the Credible Messenger program is all about goal setting and creating tools to deal with societal issues.

Currently Progress Pushers serves three communities: The Greenhill School, Seattle and Federal Way. Prior to the pandemic, Progress Pushers counselors (called navigators) conducted group programs in schools, making it accessible to the teens that need it.

“We don't want them to have any difficulty getting to us, that's why most of our groups were either in school," said Graham. "Or if it wasn't during school, it was after school at the school.”

The program is completely voluntary, says Graham, as they don’t want to be a burden on the youth who need it. Moreover, they want to make sure the youth they mentor are willing to put in the work. During both group and one-on-one sessions, participants hash out life problems that are not usually discussed in casual settings.

“We talk about social media pitfalls, cell phones, addictions, vices, values, goals, and all these deep-rooted issues that really don't get discussed as much," he said.

In addition, facilitators - who, Graham notes, have also been impacted by the same system the young people are trying to navigate - work with the youth to set and work through goals. Purpose explains that the goals don't stop after they are completed, it’s all about the follow through.

“It's not just about helping you get the job," said Purpose. "It’s about how you keep the job.”

It’s these kinds of lessons that Graham and Purpose wish they had when they were younger. While they were serving time, both of them participated in “Ready for Release” classes. Unlike most of the classes offered to them, the course was created and presented by inmates to prepare them for life outside of prison. Eventually, Purpose started facilitating groups for these classes at the prison while he was still an inmate, laying the groundwork for him to continue similar work with Progress Pushers upon his release.

Now, Progress Pushers facilitates multiple sessions with young people across western Washington. In addition to their community and school-based groups, they also have a special music group, where the youth can experiment with music as an outlet.

"Young women and men in that group who didn't speak at all in the first meetings are now singing and rapping in front of the entire group," said Graham.

Outside of regular meetings, Progress Pushers has hosted events including the first youth candidate forum in King County and a field trip to talk to state legislators. With these events, the youth get politically engaged. Even further, state legislators have the opportunity to talk to the youth.

“It was unsettling, but not shocking, to see that this was the first time they've ever had a group from the inner city come to Olympia to speak to them about issues concerning their communities," said Graham of the trip to the capital.

At Progress Pushers, all victories, big or small, are celebrated. Due to Progress Pushers, the attendance rate at one of the high schools in West Seattle’s Interagency Academy skyrocketed from 35% to 65%. To some, going to school may seem like a basic expectation.

“A lot of institutions may not see that as a victory because this is what the youth are supposed to be doing," said Purpose. "But when you're able to facilitate a process where they're stepping outside their norm to become better, we definitely have to acknowledge that.”

Since the world went virtual back in March, it’s been a matter of trial and error to find the most effective way to mentor youth. Progress Pushers in-person meetings previously offered a safe place to talk. Early on in the pandemic, Graham and Purpose tried virtual group sessions and quickly realized they weren’t as effective; engagement decreased and not everyone felt comfortable talking online at home with parents or significant others around. As a result, they pivoted to one-on-one meetings between navigators and the youth. Especially in turbulent times like these, these meetings are vital to keeping the youth on track and motivated. No matter the circumstance, Progress Pushers continues to revolve around an idea first told to Purpose by one of his mentor’s back in Prison: “sometimes it takes somebody else to see something in you that you don't yet see within yourself.”