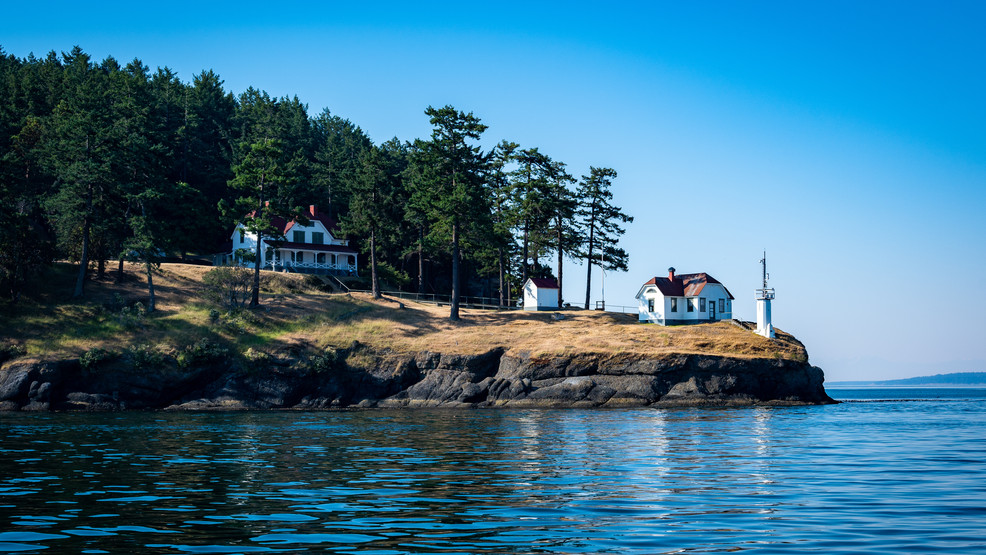 Preserving history (and a lighthouse) on Stuart Island

Imagine the most beautiful place in the world. Not hard to do, living here in the PNW.

Now imagine a remote island in the very farthest northwest corner of the San Juan archipelago...

This is Stuart Island, and for Jim and Linda Bergquist it is the most beautiful place in the world.

But no ferry line serves this pristine island. To reach this northwest paradise you are going to need a boat. There are two main harbors in which to tie up once you get there, Prevost Harbor and Reid Harbor, both have access to Stuart Island Marine Park which has acres of camping, trails, and miles of sandy shoreline. But the main attraction of the island? Well, that is the Turn Point Lighthouse and the Bergquists aim to keep it in tip-top shape for future generations.

Not too long ago, a group of us from the Corinthian Yacht Club out of Bellingham set sail for Stuart Island on our annual “cruise and clean-up” weekend, where we helped tidy up the lighthouse and surrounding buildings. We anchored in Prevost Harbor and spent the entire next day working side by side with the Bergquists, who oversee this and other volunteer opportunities such as the live-in docents.

Linda Bergquist grew up on Stuart Island back in the day when rum runners would come to stash their booty on the island to avoid detection by the authorities and the working lighthouse, which still performs its duties, lit the way for many ships rounding the corner of Turn Point into the Haro Strait.

Listening to her tell the stories of her childhood, it all sounds idyllic. Her family came to the island a couple of generations before her time, many of them keepers at the lighthouse. The Turn Point Lighthouse became central not only to the seafaring sailors but also the families living on the island. There were not many families but Bergquist grew up with activity all around her from milking the cows with her sisters who then sold the milk in larger towns like Friday Harbor, to learning to fish, to attending school in the one-room schoolhouse which still stands today. Bergquist also grew up with something else, a groundedness, a sense of place, and of history. The Turn Point Lighthouse history, to be exact, and her family’s ties to it.

Her great uncle, Peter N. Christiansen, became the second assistant lighthouse keeper in 1894 beginning the lineage which was handed down to Bergquist ( nee. Christiansen). Many, many years later, in 1965 Bergquist brought her fiance and future husband, Jim, up to the island. She had moved to Seattle for a few years to go to college and landed a job working at the Sears and Roebuck store. It was during this period she met Jim. Upon visiting, Jim not only fell in love with Linda but also Stuart Island, wondering why she had ever left.

Growing up, some of us long to get away from our towns, but the Bergquists came back. While Jim was stationed away in the military, Linda would bring their children up to the island almost every weekend and certainly every summer, working on clearing the land she inherited from her father and where they now have their family home. Stuart Island is their place which is why they feel “it is important to restore it and preserve its long and wild history for future generations.”

Today, the Bergquists are board members for the Turn Point Lighthouse Preservation Society (TPLPS), a non-profit 501-C. It’s mission is overseeing the care and preservation of this historic, stately beacon overlooking the Haro Strait. Even today, the lighthouse serves as an active aid in navigation for ships sailing the Salish Sea. TPLPS works closely with the US Coast Guard, who owns the land, and the Bureau of Land Management (BLM) who supervises the maintenance of the historical buildings. There are other historical structures the Bergquists keep an eye on in addition to the lighthouse such as the keepers quarters and the one-room schoolhouse (where Linda went to school). The lineage and stories are Jim’s to preserve, for as the appointed historian of Stuart Island he wrote a book called simply enough, “ The History of Stuart Island”.

Turn Point Lighthouse, accompanied by all the other buildings of this bygone era, are a popular attraction for visitors. Second only to the wild beauty of this island and the pods of resident Orcas that swim by almost daily. In fact, according to the Bergquists, over 3,000 tourists sign the guestbook each year but they think the actual number of visitors is closer to 4,000.

For the Bergquists this island is their home and the Turn Point Lighthouse is at the center of it. As Bergquist said, "living here, you do your part, and make a difference in the community, your community”. Good advice for wherever one lives and the Bergquists are doing just that. They consider themselves stewards preserving a living history that may have begun years past yet the story is continuing to be written.

Besides tourists to the lighthouse, the Bergquists welcome volunteer docents who each stay a week on the island during the summer months. When asked what they hope the future holds for the lighthouse they replied, “for younger people to get involved and may the lighthouse continue shining its beacon for another 100 years”.,

To find out more about Turn Point Lighthouse Preservation Society, becoming a member, or Jim’s book, contact the Bergquists through the website.