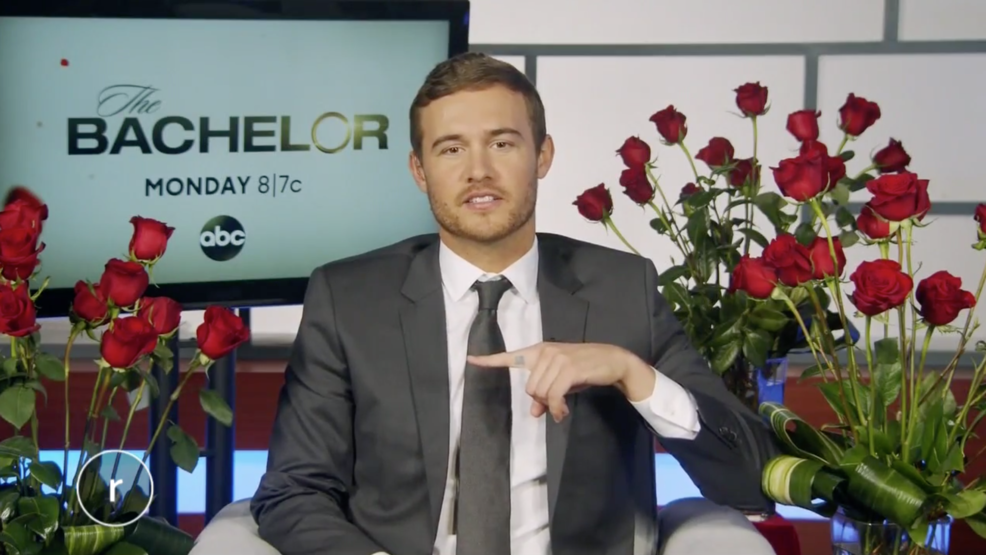 Peter, holding up his "12" tattoo when we asked him about the Seahawks (Image: Seattle Refined)
SEE MORE

Kiss & Tell: The Bachelor talks oral hygiene & keeping up with the Seahawks during filming

Seattle Refined: We are getting down to the nitty gritty on your season, and we take "The Bachelor" very seriously. Let's start with Mykenna, who we actually met last summer at our Bachelor Casting Call, she survives the Two-On-One with Tammy, and then you promptly eliminate her at the Rose Ceremony. Would it have been more efficient to just send them both home at the same time?
Peter Weber: At that point, when I had Tammy and Mykenna come, it was more for me to just get to the bottom of what was going on, because I had just had enough with it. I wasn't ever intending to just send both of them home, at that point. And so obviously I let go of Tammy, and then Mykenna moves on the Rose Ceremony. And honestly, I didn't know all the roses I was going to hand out, I still needed to really have some conversations with some of the women to feel 100% secure in what I was doing, and Mykenna was one of them. Obviously I ended up sending her home at the Ceremony, but that's kind of why that occurred the way it did.

You also sent Sydney home last week, and I was stunned, personally, to see her go this early. The physical connection was clearly there, I mean you name her the best kisser in the house...so was there something going on off-screen that we didn't see that lead to that decision to not give her a rose?
Honestly? No, there really wasn't. I've bene asked that a lot too, and at this point it just kinda becomes a numbers game. We're getting down, like you said, to the nitty gritty, and the plain and simple honest answer is I just had stronger connections and relationships with the rest of the women there, and it was just a numbers game. It's tough, because you have such a great One-On-One like I had with her, and then because of the number of roses I have left, it's time to say goodbye and that's never easy.

We have an awesome Facebook group where we talk about all things "The Bachelor", and we solicited some questions from some folks in there, and this one comes from Kaitlin, who asks how you remember the names of all the women, especially at the beginning. Did you have flashcards? What was the strategy?
That was not easy. I definitely messed up a lot of names that first night. No, it's really nice - I have a lot of flashcards with their faces on them, and obviously I would try my best to memorize the names in person there that first night, but after that first night for the next couple days, every night I would go through the flashcards with their faces and their names and just memorize those, and then first thing in the morning do the same thing. It took me maybe two days, and then I was good, I had 'em down.

Brenda is wondering - you made out with these women, sometimes back-to-back in these early episodes, did you brush your teeth in-between? Are you going with a breath-mint? What's the thought process, how'd you plan that out?
Rest assured, very hygienic. I had breath mints, strips, the sprays, would brush my teeth one in a while throughout the night, and that's just part of, I mean you're never going to really do that again in your life, date that many women in one night like that, it's just part of being 'The Bachelor' I guess. I've always been kind of a passionate person, and if I'm feeling it with someone, I don't necessarily hold back. But don't worry, I was very minty fresh.

It seems like every One-On-One date you go on ends up involving dancing with these women in a public space of some kind, and it looks like it's going to happen again tonight with Natasha. Was the dancing something you asked of producers, or did you just really want to show off your moves? How did that come about?
Everyone kinda know that I'm just the dorkiest dancer, I like to just have fun and just be a goofball, so definitely a lot of dancing was incorporated into the dates. Yeah! The dancing kinda found us to be honest, like in Peru you're gonna see with Natasha we stumbled upon this cool band and we hopped in and had fun with them. Dancing is something I've always loved to do, and be goofy and that's what I did with them. A lot of cringeworthy moments of me dancing, for sure. You gotta own it.

I know you're a noted Seahawks fan, so I want to ask you - you were filming the show right in the middle of the football season. Were you able to watch the games when you were filming? Do you DVR them and go back and watch them all later? How do you keep up with the team?
Bless my producers. They would do everything they could to let me see as much of the game as I could in between traveling between dates or whatnot, I was following along as closely as I could. Unfortunately, one of Russell's best seasons I honestly missed a lot of the games and that was tough, but I was following along as best as I could, and I got to get to some games when I was finished filming and that was great. I'm a 12 fr life, so Go Hawks.

What can we expect going forward? We're down to the Final 6, and it really seems like you've made a concerted effort to eliminate the drama and really focus on the relationships.
Yes. Really excited for everyone [to see], this is the part of the journey that I was looking forward to the most, and, in my opinion where it gets good. If you are more focused on the love side of it, not the drama, I think you're going to really enjoy the rest of this season, and you're going to see a lot of amazing relationships really take off. You're going to see me make a really big statement this next week, one of the biggest statements of the season. The love is coming, for sure.