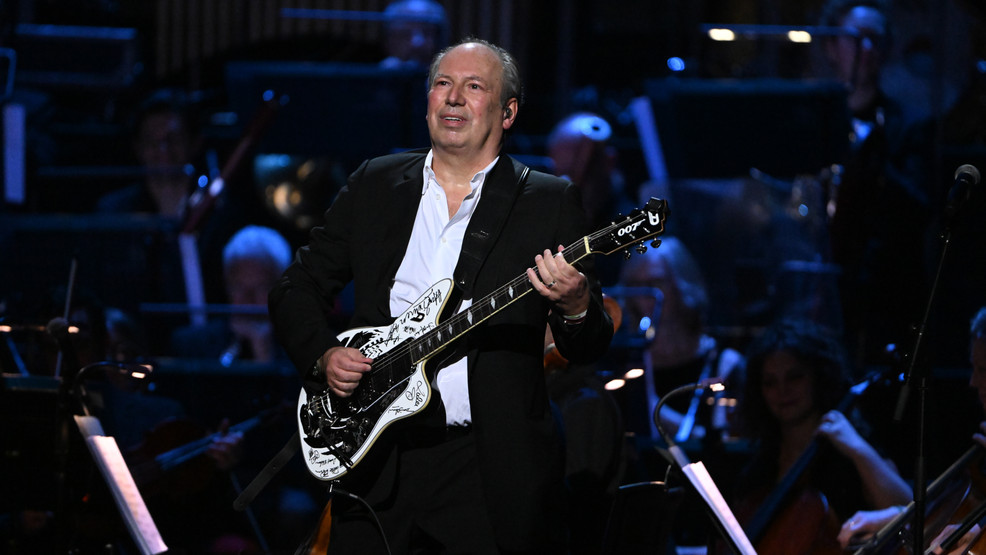 LONDON, ENGLAND - OCTOBER 04: Hans Zimmer performs on stage accompanied by The Royal Philharmonic Concert Orchestra during The Sound of 007 in concert at The Royal Albert Hall on October 04, 2022 in London, England. (Photo by Jeff Spicer/Getty Images for EON Productions & Prime Video)
SEE MORE

If you go to a Seattle Kraken game this season, make sure you're in your seats a few minutes early for the pre-game show. Two Oscar winners are helping get players and fans hyped up ahead of the game, with a very special piece of music.

Some fans are hearing bits of it while still on their way to Climate Pledge Arena. As they board the Seattle Monorail, they're not just riding the rails to Seattle Center.

The words "welcome aboard Kraken fans," play over the PA system, followed by, "your journey to the deep starts now!" And that's when the music begins.

Fans describe it as epic and intense. "It was exciting, like we're entering something," said a fan.

"It gives me feelings," said a young fan. "It makes sense it's, like, Kraken." And they're hearing just a snippet of music composed for the Seattle Kraken.

KOMO News had an exclusive interview with Kraken co-owner and Academy Award winning film producer Jerry Bruckheimer to learn how this music came to be. Bruckheimer shared that he reached out to his longtime collaborator and fellow Oscar winner, Hans Zimmer.

"I contacted him, I said, would you do me a favor? He said sure," Bruckheimer said.

That's it. That's how perhaps the most famous movie music composer in the world came to create an eight minute music suite for the Kraken - for free.

"It's romantic. It's heroic. It's something for warriors going into battle, and that's what we wanted to do," Bruckheimer said.

Bruckheimer doesn't get to as many Kraken games as he'd like, but he flew in from a film set in London for Saturday's home opener and to see and hear the music in the arena for the first time.

It plays during a mini-film that builds excitement and anticipation just before the puck drops.

The visuals and the narration elicit cheers from the crowd, but even if you were to peel those pieces away and had only the music, the drama is inescapable.

Zimmer tried to get into a player's mindset on game day.

"That moment when maybe you're quiet. You're contemplating. Then you hit the ice for warm ups and there's adrenaline. How does that flow?" said Katie Townsend, Seattle Kraken vice president for Marketing. "The first time I listened to it, I couldn't believe that he captured that essence of hockey."

Bruckheimer said Zimmer is not a hockey fan, but he is a storyteller.

"We sat down in his studio in London, he started playing some stuff, and we worked on it a little bit in Los Angeles, and it kept developing and developing," Bruckheimer said. "It sounds like a call to battle."

It's a call to battle for the players and the fans. Right after the music peaks, the team is on the ice. Battle call - answered.

"Music is like words of the gods," Bruckheimer said. "And it's fantastic when you get it right."