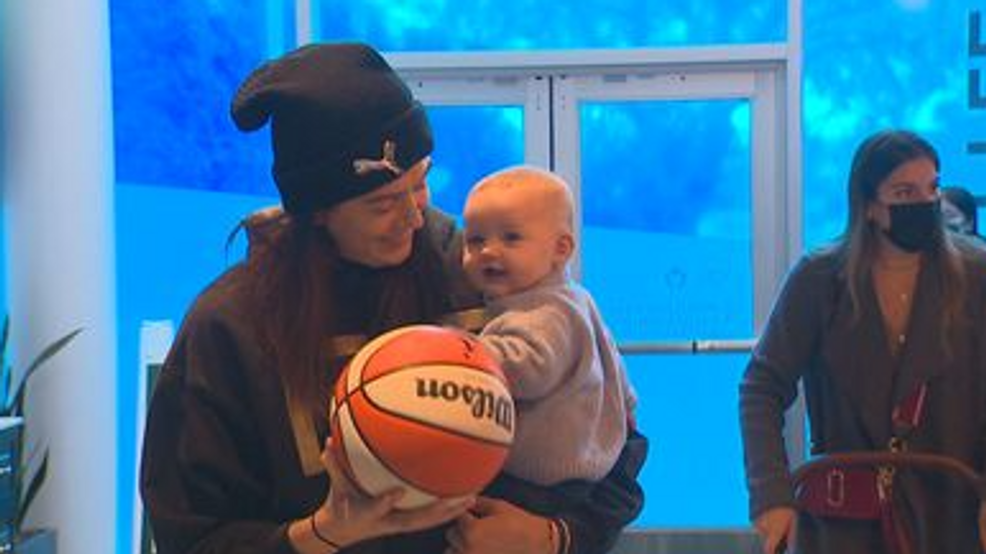 It's the end of the year, which is time for many to reflect on the year that was.

I'm reminiscing on some of the unique and special stories we covered on KOMO sports over the last year.

To be clear, this is different from the downright exclamation points we saw in Seattle sports, like the Mariners ending the drought or the Seahawks beating Russell Wilson in his return.

These are some the stories that showcase the special athletes we have in the Pacific Northwest.

Breanna Stewart is the best basketball player in the world.

And what makes that statement even more impressive is the fact that she's a new mom.

Little Ruby Mae was born in August of 2021, so the 2022 season was Breanna's first full campaign as the Seattle Storm's leader on the floor as a working Mom.

Not only now does Breanna inspire with her work on the court, her loving ways as a mother but she and her wife Marta are giving so many couples courage.

This is a special story on so many levels. Breanna Stewart continues to do amazing things on and off the court--using her platform to change the game for so many.

Bring Back the Sonics

It's THE question when it comes to Seattle sports.

When will the Supersonics return?

Of course there's always conjecture or rumor, but we decided to take our questions to some real players in the game.

While so many sports stories on this list are my favorite because they show the best of what athletics can do, I enjoyed this so much because it was a thrill to talk with Kraken CEO Tod Leiweke and former Sonics Head Coach George Karl.

And Tod had a little secret up his sleeve to show us at Climate Pledge Arena.

This is not one of my favorite stories because of the circumstances which are beyond tragic---but rather the way a grief-stricken family is turning heartache into hope for others.

Colin Pritchard passed away after a brave battle with Ewing's Sarcoma in August of 2021.

On the day that was supposed to be his final high school basketball game in February of 2022, his family and teammates honored him the only way they knew how.

With an outpouring of love on the basketball court.

Anytime I think of the Pritchard family, even though I've only met them in person briefly I'm initially moved to sorrow and nearly tears. A sadness that lingers but is overcome by admiration. Kelly Pritchard says "there's no playbook" on how to handle the loss of a child. Yet, there the family was in a celebration of life and beginning a fight to help avoid heartbreak for other families in the future.

And, you'll never know this from watching the story, but the photojournalist who gathered the video in that story is Paul Koehnke. Paul is a beloved member of the KOMO News family whose beautiful young son George just won his own battle with cancer. It brought the story even more home for us. For me, watching the elements gathered, I was awestruck by the courage of the people in front of and behind the camera.

Before "The Homerun" there was "The comeback" for Cal Raleigh.

Many forget, Raleigh did not have the best start to the 2022 Mariners season and was actually sent to Triple-A Tacoma to work some things out.

It's safe to say he did that and then some.

Raleigh was called up after a season-ending injury to Tom Murphy and never looked back on his way to a special season.

The Mariners ended a 21-year playoff drought and did it with Cal hitting the walk-off home run to clinch the playoff bid on September 30th. He set a Mariners mark for home runs in a season.

And again, he did it after spending parts of April and May in the minors.

It's an incredible comeback story and while we did this story before all the heroics in the fall---Cal agreed there was still a message to young players who run into adversity.

History in sports is something that truly does live on forever.

A trailblazer will always be remembered as the first, the one who paved the way for everyone that followed.

That's what Luke Prokop will be remembered for.

Luke is the first openly gay player to sign an NHL contract, and he's working his way to the show here in Seattle with the Thunderbirds of the WHL.

The history alone is special here.

But the reason I love this story is Luke's courage to let the world know who he is---and partially being inspired to do so because as a young hockey player---he had nobody like him to look up to.

The Seattle Kraken and Vancouver Canucks have a neat regional rivalry in the first season-and-a-half of Kraken hockey.

So, when a Kraken fan posted a note on the glass to a Vancouver coach, not much attention was paid to it---except it was a really unique note.

A life saving one.

We were brought the happy ending of this story on the very first day of the year January 1st. And it set a new standard for how to treat one another.

I love this story too, but we can't show the video due to NFL video restrictions. Seahawks star wide receiver Tyler Lockett isn't just an incredible talent on the field but he's now a real estate agent. He even sold his first house in Sammamish over the summer. You can check out that story here.