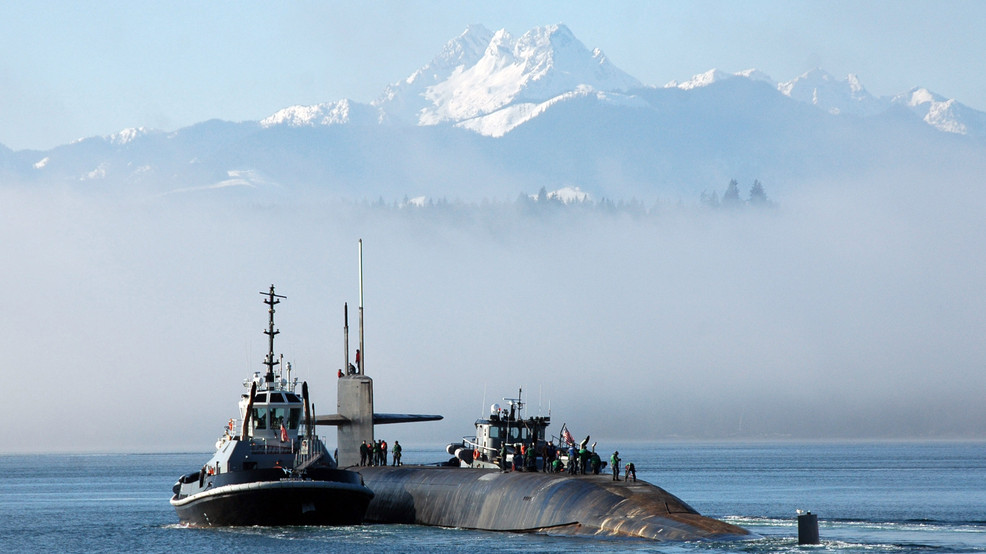 The United States Navy and western Washington have a rich shared history. One that dates all the way back to the 1890s.

"There was an article posted from 1892 that talked about building a new shipyard in Bremerton. So, in the history of the Navy and the history of Washington, we go way back," said Capt. Richard Massie, the Commanding Officer of Naval Base Kitsap.

Established in 2004 by combining five separate naval bases, Naval Base Kitsap is the third largest installation in the entire Navy, spanning more than 11,000 acres.,

"Naval Base Kitsap supports the fleet, fighter and family. That's plain and simple," explained Capt. Massie. "It's an incredible, vast array of missions we support."

Capt. Massie describes his role, base commander, as being similar to the mayor of a town. He oversees a complex infrastructure that supports the base's 90 tenant commands and some 45,000 people who work throughout the base.

"Strategically, we have the strategic deterrent mission. Over 65% of the Navy's strategic deterrence force is up at Bangor. We've got the biggest naval shipyard in the Pacific that supports dry docking a Nimitz class (aircraft) carrier. The only dry docks that can dry dock an Ohio class submarine," said Capt. Massie.

While many naval vessels, including aircraft carriers like the USS Nimitz dock at Puget Sound Naval Shipyard in Bremerton, the home of Submarine Group 9 is about 15 minutes up the road at Bangor Trident Base.

"We have all three classes of submarines in our submarine force at Naval Base Kitsap," explained Capt. Massie. "We have fast attack submarines...we have guided missile subs....we also have a significant ballistic missile submarine presence."

During my visit to NBK, I got the opportunity to tour an Ohio-class ballistic missile sub, the USS Alabama.

"The (USS Alabama) has been around for a while. It has accomplished a lot. The keel was laid in 1980, commissioned in 1985. Since then, it has won multiple awards for strategic missions, such as the Omaha Trophy. Recently, a big milestone we met was the first ever exchange command at sea here on the west coast," said Lt. j.g. Samuel Faith, as we chatted inside the Alabama's ward room, where officers eat most of their meals.

"We wait for the captain to eat. He is our father figure. Once he eats, we eat and then we go on watch after that," explained Lt. j.g. Faith.

As you might imagine, for security reasons, we were only allowed to film our TV segment (check out the video above) in certain parts of the submarine. We did, however, get a taste of what life is like on board and the incredible camaraderie of the Alabama's crew.

"It's a lot different than what you might see in a movie or TV show," explained Chief Petty Officer Chad Waller, of what daily life is like on-board the Alabama. "A lot of times it's just a normal day. You do your job, you go down, people play video games, board games. A lot of people play (the card game) cribbage. But, then it can all stop in an instant. When we hear an alarm go off or something happens on the ship, everyone stops what they're doing. They have that reactionary snap to go fight whatever is going on with the ship."

"You get to learn everybody on a very deep level that most people in normal friendships don't actually get. It's a brotherhood down here," added Petty Officer 2nd Class Jaylin Matthews.

One aspect of submarine life that may surprise the general public is that enlisted crew sleep in nine-person bunk rooms.

"We're set up for nine-man berthing," said Petty Officer 2nd Class Joshua Mummy, as he showed me around his bunk room. "We each have our own lockers and then we have a common locker and a shoe tree, so we can put our boots in there while we're underway."

"(Our beds) are about six-feet-long by three-feet-wide. It's actually a little smaller than a twin mattress, but once you shut your curtain and you're in there, it's a little space, but you get used to it."

For the crew members we met, the USS Alabama is home for months at a time. They do their jobs while floating silently under the water, often hundreds or thousands of miles from home. After spending a short time on-board, one can't help but have a profound respect and appreciation for the bravery of the crew and the work they do to protect and defend our country.

"We carry out our mission and then we build that family and that brotherhood," said Petty Officer 2nd Class Matthews. "When you talk about the submarine force, (a lot of people) just think about the submarine, but it's the crew itself that actually makes us do what we have to do."