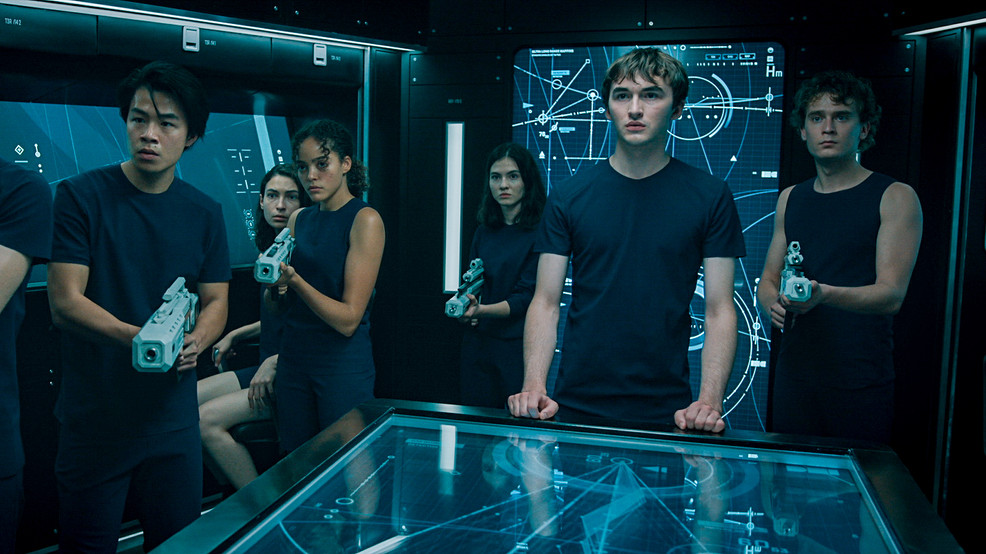 Review: 'Voyagers' aims for the stars, lands in space debris

From the director of "Divergent" comes the latest dystopian galactic thriller "Voyagers", a YA-geared film that aims for the stars, but ultimately lands in space debris. Obviously influenced by "Lord of the Flies" and other young adult properties ("The Maze Runner" and "Divergent" being the most ripe for comparison, given their themes like the danger of herd mentality and children as tools), the film teeters between innocuously shallow and frustratingly self-aggrandizing.

The premise of "Voyagers" goes like this: Earth is approaching its last leg of habitability. People must find another solution to carry on the human race, and their best purported option is to send young people - raised in the long tubular hallways of a simulated space ship and deprived of family life, normal friendships and even seeing sunlight (you know, everything that makes us human) - out into space on a multi-generational voyage to a habitable planet 80-some years away.

This means that they will never know anything but life on the ship, and it will be up to their children and grandchildren, all of whom will be conceived and raised like scientific test tubes aboard the vessel, to continue the race on some new home planet. It's certainly not the first film to proffer such dire lengths humans will need to take in order to survive the demise of our planet, and in that sense, it adds nothing new to the dialogue. This does, however, make for a perfectly insular world that is ideal for YA fodder. The focus is on the kids and their actions without the distraction of large world-building and outside threats.

This isn't a study of extraterrestrial life, or even the hazards of space pioneering. The teens, overseen by the paternal mentorship of Richard (Colin Farrell), are told when to eat, sleep and exercise. Their daily routine also includes a mysterious drink ominously called "the Blue". Unbeknownst to them, the daily allotment of the Blue curbs their emotions and rising hormonal attraction to one another, thereby molding the perfect group of kids responsible for the future of mankind without the intensity of post-puberty stickiness. They are literally forced to drink the Kool-Aid.

Christopher (Tye Sheridan) is the thoughtful obvious leader of the bunch, a minder of the rules along with Sela (Lily-Rose Depp) who is shaping up to be the lead healer and medicine woman on board. Zac (Fionn Whitehead) is the rebellious dissenter with a bevy of loyal cronies. These are the two factions that naturally developed. As the young crew members begin to question everything they've ever been told, the barbaric side of being a teenager is brutally exposed. The dueling cliques led by Christopher/Sela and Zac respectively must convince the rest of the crew to pick a side or else face the dire consequences of a bully's punch.

Despite its flirty premise, the primary problem that "Voyagers" faces is the seriousness with which it takes the morals that rest shakily at its core. The film is eager to address age-old philosophical questions like nature versus nurture and right versus wrong without any sort of strong, clear thesis on the topics. We know who is "good" and who is "bad", but we don't understand their motivations for why they choose order or chaos. Self-preservation is also a major theme, but here as well there are conflicts of interest. Zac and crew are willing to tear apart the ship for a good time, without considering the fact that a few layers of metal separate them from oblivion. Even for a teenager, that kind of zeal and lack of awareness is a stretch.

Does going off the Blue have some effect that makes the passengers change more dramatically? That isn't clear either. All we know is that some remain level-headed and sane while the rest turn into rabid dogs in pursuit of a juicy bone. To that end, there isn't much interest in the involvement of real science, and writer-director Neil Burger instead prefers symbols and general representations that can tidily explain away the characters' decisions and feelings. To that end, when the teens stop taking the Blue, they transform from indifferent robots to passionate, (metaphorically) red-eyed animals, lunging after one another and willing to violate a friend they've known their entire lives just because they suddenly can feel a full spectrum of feelings. It's a dramatic turn, even for a young adult property which has us completely lost in space, but not in any sort of scholarly thought.

"Voyagers" is available on premium video on demand.