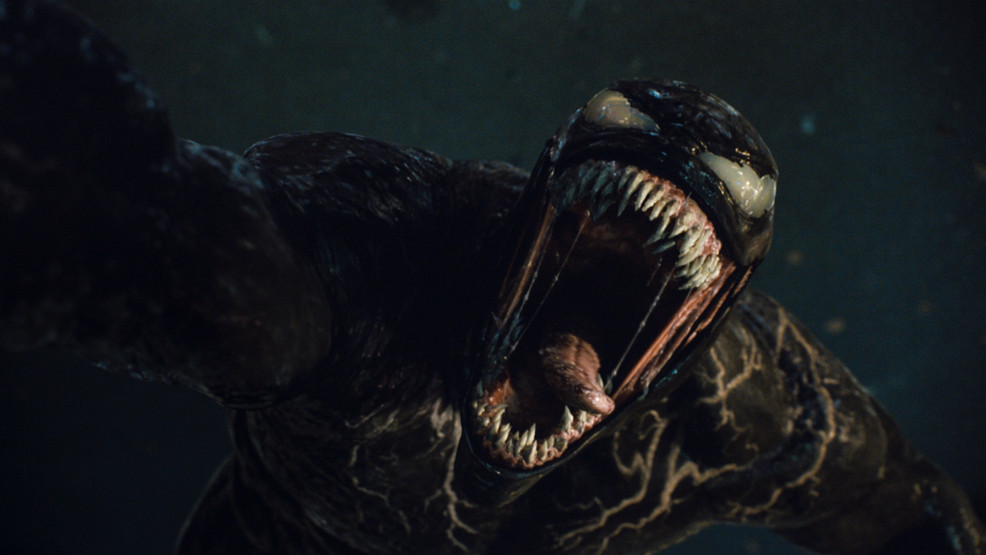 Review: There's not much to sink your teeth into with 'Venom: Let There Be Carnage'

After a surprisingly prosperous run at the box office in 2018 and despite the cacophony of negative reviews by critics, "Venom" needed a sibling. It may have operated best as an only child, but Sony in partnership with Marvel Entertainment has a new Spider-Man series (Sony's Spider-Man Universe) to fill with films focusing on the bug-based superhero's various adversaries. And so, with a little love and lots of consideration for zippy trailers and the film actors most likely to guarantee a repeat of theater attendance, "Venom: Let There Be Carnage" was birthed into the world for all to whisper with hopeless resignation, "Not another one..."

But yes, another one. Tom Hardy once again fills the role of Eddie Brock, a character he makes infinitely more interesting with his acting prowess, even if he has us questioning why he deigned to inhabit another comic book antagonist when his turn as Gotham City terrorist Bane in "The Dark Knight Rises" is cemented in cinematic hall of fame. Brock, a bumbling, disheveled journalist whose fiancée Anne (Michelle Williams) dumps him in the first film, is learning to live with his extraterrestrial symbiote named Venom. They survive as one, Brock in his normal form and Venom often appearing as a large, floating head tethered to Brock in an unseen spot on his back. In times of dire need, Venom emerges, enveloping Brock's stocky human frame and transforming into the black, veiny, lizard-like physique that is seemingly impenetrable and ultra malleable. Venom's toothy perma-smile alone is enough to stick him in perpetual bad guy category.

By the opening of this sequel, Brock and Venom have fallen into a domesticated, almost marital existence. Venom complains about the lack of sustenance in the house as he can only eat chocolate and brains. The two chickens Brock has brought in to serve as Venom's snack have, thanks to the alien's growing soft spot for Earth's creatures, become pets. In between fighting and play-fighting with Venom, Brock attempts to keep his profile low and his career alive. No one knows about Venom, and those who do think he was destroyed in the last film.

It is at the personal request of high profile serial killer Cletus Kasady (Woody Harrelson) that Brock gets an exclusive interview. When Venom helps Brock find Kasady's buried victims - a feat that is almost comically unimaginative and simplistic, using Kasady's cell drawings to pinpoint the missing graves like... you know, a map - Brock gets famous, and a scorned Kasady wants revenge. He doesn't really have a plan on how he can or will take down Brock, given that he is now sentenced to death for his crimes, but the opportunity finds him. Kasady bites Venom's hand, consuming some alien blood.

So is born Carnage, a red-colored offspring of Venom with more arms that shoot daggers and a one-track mind set on domination. But first, patricide: Venom must die. Kasady rescues Frances (Naomie Harris), his childhood sweetheart at the reform school for psychotic youth until she was pulled and sent away to Ravencroft Institute for the Criminally Insane, a stronghold within the Marvel comic books that houses a number of superhero foes. She is a mutant with the special ability to manipulate sound, notably by making supersonic, physically impaling racket, and the murderous duo run amuck through the city.

If this aspect of the film sounds familiar - two previously abused, emotionally damaged lovers on a killing spree, one of whom is portrayed by Woody Harrelson - then you've seen "Natural Born Killers", possibly the best association that could be made for this film. Otherwise, "Let There Be Carnage" takes the path of least resistance, taking all the fun out of "I didn't see that coming" detective mysteries and bludgeoning the script with off-beat human-alien relationship humor and a run-of-the-mill "maniacal bad guy destroying the city" dilemmas. Apart from the urge to eat humans, Venom is a softy, just a few levels up from the green face Jim Carrey wears in "The Mask", an arguably more sinister, equally silly and comedic film.

"Venom" is actually quite a bit like that aforementioned mid-90s dark comedy. The difference is that "Venom" is dressed up to fight like a superhero, but falls short of the high water mark set by its many predecessors. It keeps the mood light and plot simple, bordering on dim-witted. Unless the Venom character is some subvert allegory for the impulsive demons that have haunted my strong-willed, capricious 20-month-old lately, there is not much to sink your teeth into with "Venom: Let There Be Carnage" apart from some alien parasite humor, a lifeless love triangle (square, should you count the extraterrestrial leech) and the predictable, short-lived rise and fall of a formulaic villain.

"Venom: Let There Be Carnage" is in theaters now.