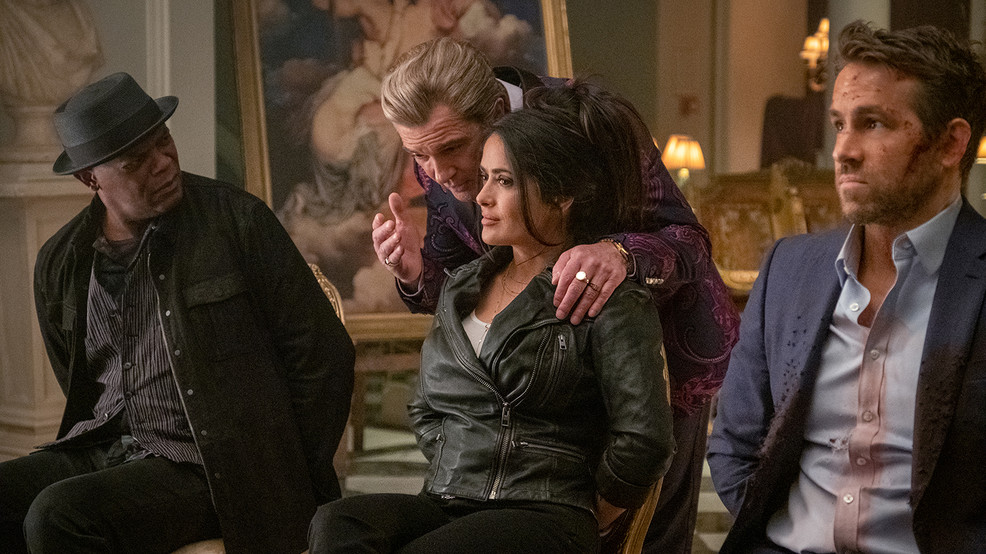 In this week's edition of "Sequels We Didn't Know We Didn't Need", we have "The Hitman's Wife's Bodyguard", an absurd, palm-to-face follow-up to 2017's "The Hitman's Bodyguard". The first film which also starred Ryan Reynolds, Samuel L. Jackson and Salma Hayek was a decent action-adventure flick with a smattering of comedy thanks to the aforementioned bonafide movie stars who infused the roles with some modicum of humility but still with enough high octane stupidity to entertain. There was a succinct story, proper character development, flirty action sequences and some through-their-teeth comedy to appease most father-in-laws.

Director Patrick Hughes and writer Tom O'Connor throw all of that out the window for the sophomore endeavor, a strange, overly slapstick film that forces its high profile leads to do ridiculous things and act in ridiculous ways. From the opening minutes, it is clear that "The Hitman's Wife's Bodyguard" is not attempting to do anything but land a constant stream of laughs, even if most jokes don't stick the landing (or make it onto the stage at all).

Reynolds returns as Michael Bryce, a disgraced bodyguard who, in the first film, let an important client die on his watch at the hands of impeccably-named hitman Darius Kincaid (Jackson). Because of this incident, Bryce lost his AAA licensed (a made-up credential that, while a joke in the first film, because a constant point of contention here), causing his life and mental health to unravel. Bodyguarding was his identity. His therapist tells him he should avoid the career at all cost, and though he tries to do just that, the job finds him. During what is supposed to be a relaxing sabbatical and an escape from bullets and chaos in Capri, Italy, he's snatched up by dirty-talking con woman slash Kincaid's wife Sonia (Hayek). She comes in guns blazing through the picturesque seaside resort in a scene that is questionably necessary and unquestionably indulgent.

Darius needs saving again. This time, it is from Aristotle, a Greek billionaire with gaudy fashion sense and a dubious accent (played by Spanish-born Antonio Banderas) who has plans for total destruction of the European continent as revenge for sanctions on Greece that have destroyed its economy. The trio are recruited by an Interpol agent (Frank Grillo) to find the device from Aristotle and stop him from wiping out all of Europe's power which, conveniently, can be accessed by drilling into one point out in the ocean?

Idk none of it really matters. The details are muddy and obviously not meant to be cut into with even a toothpick, lest the entire cake deflates. The point here is that the film is nonsensical and, quite often, frustratingly lost in its own folly. Reynolds is back doing the satirical schtick he does best, but without the access to hardcore violence and profanity that makes adult viewers chuckle. In which case, rewatching "Deadpool" may be a better option than tuning into this smut. Hayek and Jackson have a nice rapport, which is nearly destroyed by Sonia's grating, annoying demeanor. It's not that she says terrible things; it's that she spends the film's runtime either screaming the dialogue or else demurely lamenting her closing fertility window, a joke derived from the first film that gets beaten to a bloody pulp in this one.

Which is perhaps indicative of the film as a whole: it's the last the leave the party. O'Connor and Hughes make the conscious decision to turn on their previous film, not only mocking it, but skewering (or attempting to do so) the genre as a whole. Even the performances by the three leads are so hyperbolic that the characters - as written and as performed - are unrecognizable this time around. It is almost reminiscent of the relationship between "Scream", a genuine horror film, and "Scary Movie", a bloodbath of a parody that is outrageously obtuse.

"The Hitman's Wife's Bodyguard" feels a lot like that: lazy, cheap and forgettable. It certainly isn't imperative to have seen the first film beforehand, though certain details and references would make much more sense. Otherwise, there is no true comparison to draw between "The Hitman's Bodyguard" and "The Hitman's Wife's Bodyguard", its long lost, weirdo cousin, a family member that may look like you and share some commonalities, but someone you've learned to avoid at family functions until eventually you never see or think about them again.

"The Hitman's Wife's Bodyguard" is in theaters now.