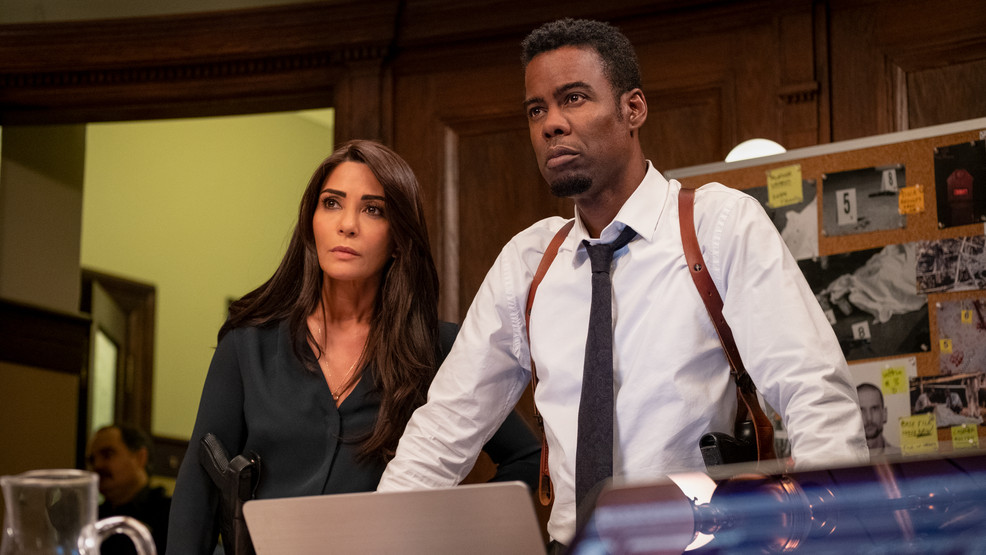 Horror fans looking for a smart, gruesome, inventive new watch will get one out of three adjectives with "Spiral: From the Book of Saw", the latest installment in the "Saw" franchise which has seen eight previous films, some more memorable than others but none with the almost-redeeming quality of stars Chris Rock and Samuel L. Jackson. Almost being the key and immovable word.

Chris Rock stars as Detective Zeke Banks, a cop operating in the tall shadow of his father (Jackson), a highly esteemed former police chief. Zeke is a good guy who abides by a very stringent moral compass. His colleagues leave dead rats on his desk as a reminder of the time he turned in one of their own for lying about shooting a witness. Zeke may be better than most, but it's just as likely his coworkers are especially skeezy, an entire department made of liars and conmen easily bought and thirsty for power. Zeke is a lone wolf who takes on jobs without telling the new police captain Angie (Marisol Nichols). At the end of her rope with the rogue cop, she partners him up with newbie William Schenk (Max Minghella). He is eager to please, a doting family man and lacking the jaded pessimism Zeke exudes.

Jigsaw, the overarching antagonist of the series, died in a previous film. The new serial killer, who wears the skinned head of a pig to hide his identity and who is, needless to say, a big fan of metaphors, duplicates Jigsaw's infamously fatal puzzles. One cop must choose to rip his own tongue out to survive the deadly force of a fast-moving train. Another must dislodge and remove his fingers or else face death by electrocution. There is no "winning" in these games, and it becomes clear that the killer's intention is for them not to survive, but to pay for the mistakes they have made on the job.

"Spiral" has a lot of love for the source material and for the "Saw" universe. The hope was that this would tell an entirely new story with fresh characters and reinvigorate a property that has been wrung dry of imagination by too many sequels and a savage genre that is less in vogue than it was almost twenty years ago. To accomplish this director Darren Lynn Bousman and writers Josh Stolberg and Pete Goldfinger attempt to give us real "Se7ven" vibes. The pairing of a rookie and an old-timer. A string of intricate murders committed in ostentatious ways. An overarching mission to rid the world of evil. The look and feel of "Spiral" emulates "Se7en"'s neo-noir roots with a color palette that is uncomfortably warm. So warm, that we see the sweat build on each character's forehead and the light shine off their glowing cheeks. In terms of role models, "Se7en" is an amazing film to cheat off of. It certainly elevates "Spiral" by the mere fact that it's been mentioned here at all, and as a comparison no less!

Unlike the aforementioned Fincher classic, however, "Spiral" makes one - well, many but we'll highlight its most egregious - fatal error: its focus on tone and mood can't hide its scarily thin premise and glaringly obvious denouement. We were shocked and shook by what Brad Pitt found in the box in that desert in "Se7evn"'s final act; when Zeke faces off with the killer, we can't help but turn smugly to our viewing partner and say, most annoyingly, "Told ya!" "Spiral" incites a lot of speculation, and sadly, even small details string together well before the truth is meant to be revealed. Characters aren't fully realized, and their relationships are underdeveloped and rushed. Rock brings his comedic levity in addition to rocking a mean furrowed brow, but even he can't distract us from the poor writing and jolted plot development.

"Spiral" is in theaters now.