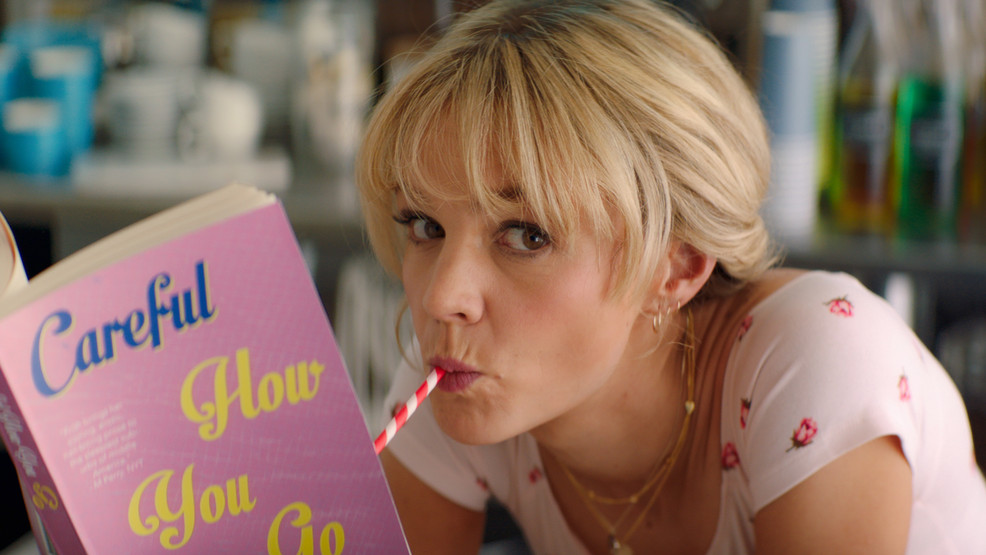 Review: 'Promising Young Woman' is a dark comedy that both thrills & chills

Sex, drugs and... a pernicious vendetta. All three are necessary for the sick fun that is "Promising Young Woman", a dark comedy highlighting gender inequities while it thrills and sends chills down your trembling, woke spine. Trembling from nervousness, or perhaps from the rage ignited by the film's lead Cassie (Carey Mulligan). Comparable, perhaps, to "American Psycho"'s Patrick Bateman in a tone that is reminiscent of Diablo Cody's quick-witted female leads and with the outlandish juxtaposition of bright, happy colors with violent sequences we've seen in comic book adaptations like "Birds of Prey", Cassie goes from good student, a "promising young woman" to femme fatale following the disenfranchisement and ultimate death of her best friend Nina, who never makes a physical appearance, but who is felt the entire film through.

"Promising Young Woman" opens in a club. Cassie appears heavily intoxicated, slumped on a couch, bare legs thoughtfully splayed. A seemingly attentive stranger (Adam Brody) offers to see her home. His intentions are not pure, and as he is about to take advantage of her without consent, Cassie strikes. This is the passion project she completes at night: teaching men the error of their ways, often resorting to bloodshed, depending on the severity of his attempted violation. She records the color-coded names of her victims in a journal when she gets home. During the day, she works as a barista at a boutique coffeehouse, a far cry from medical school. She dropped out years prior after an event that is heavily teased. It becomes clear quickly that the physical trauma was committed on Nina, but Cassie was also emotionally scarred, left to pick up the broken pieces of her best friend.

With her debut feature, writer-director Emerald Fennell (you'd probably recognize her as Camilla Parker Bowles in the most recent season of "The Crown") creates a twisted, yet raucous comedy sobered by its real-life truths and made ironic by its sugar-coated color palette, a preference for pastel and floral that is both appealing and appalling. The power of the female, particularly in Cassie's swagger and presence, is dampened by the reality that a man's word is still the most powerful item of persuasion. The golden ticket. The get-out-of-jail-free card. Mulligan has the big task of committing to Cassie's insane acts, but also humanizing her for the audience. She does this handily, and, though we may not totally understand her, we are rooting for her success.

Now a bad-boy vigilante, Cassie is content with her small, warped contributions to feminism until she runs into Ryan (Bo Burnham), a former med school classmate and current pediatric surgeon. He is eager to score a date with Cassie whose high walls repel romantic love. Though he slowly wins her over, his reappearance in her life also ushers in others from her past. First, there is Madison (Alison Brie), a once-friend who partakes in gossip though never wants to get her own hands sticky with it. She is Cassie's entry drug into the land of revenge, and once she starts, she has to go all the way up the ladder to enemy number one: Al Monroe (Chris Lowell), the guy responsible for everything.

Like its female-driven dark comedy predecessors (think "Heathers" or "Jennifer's Body") the film's foremost concern is the impact its satirical points have made; any focus on rooting its characters in reality is secondary at best. Cassie is an antihero whose actual acts of vengeance are never shown in detail. However, the point she makes rings true in every scene: apart from killing ourselves (and possibly others), what else do women have to do to be believed? It's easy to agree with everyone around Cassie, including her parents (Jennifer Coolidge and Clancy Brown), Nina's mom (Molly Shannon) and her best-friend-slash-boss Gail (Laverne Cox), who say she needs to "move on" with her life. She is obsessed with what happened to Nina and is seemingly throwing her life away because of it.

Fennell makes it clear that this isn't a choice Cassie makes. Though it was Nina who was sexually assaulted, Cassie is also collateral of the event whose ramifications are farther reaching and longer lasting than it may seem from the outside. That is perhaps Fennell's greatest commentary to the women-as-prey dialogue. It isn't about the actual act. It isn't even about the person it happened to. It is about the side players sexual assault affects over years and years, both those who fought for women like Nina and those who laughed at her on the sidelines. Like the proverbial straw on the camel's back, there comes a time when there is no other choice but to fight back.

"Promising Young Woman" is available to rent on VOD.