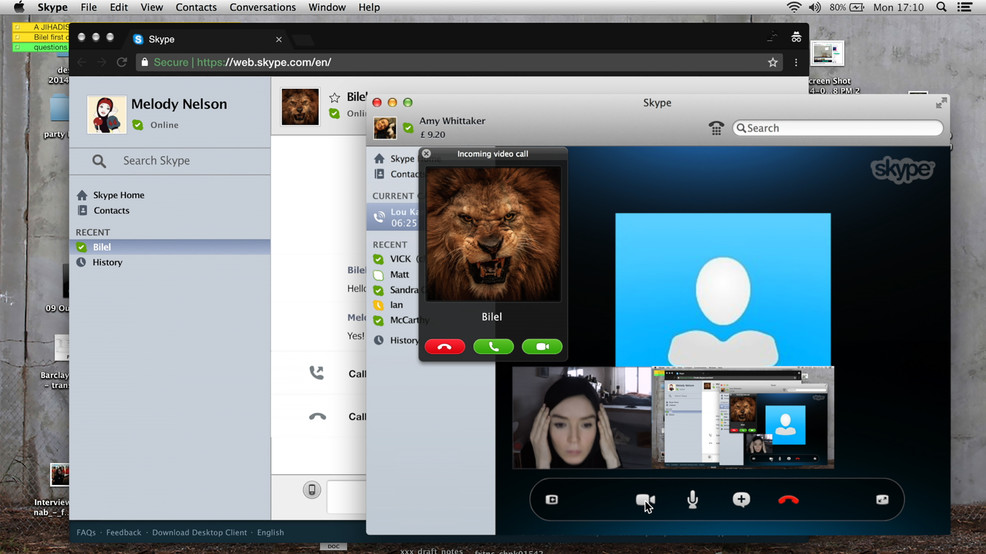 Writer-director-producer Timur Bekmambetov got his first taste for the lucrative film subgenre known as "screenlife" with 2014's "Unfriended". He produced that film which cost $1 million to make and generated $64 million worldwide. His next hit as producer, 2018's "Searching", was made for less than that ($880,000) and brought in more (over $75 million worldwide). Bekmambetov finally takes his seat in the writer-director's chair for the newest installation into the genre he helped pioneer, one that tells a story from start to finish within the confines of a computer screen. "Profile" uses this format with a clever, timely set-up.

Amy (Valene Kane) is a freelance journalist living in a London flat she can hardly afford. She is on the brink of moving in with her boyfriend Matt (Morgan Watkins), but more urgently, she has taken a dangerous assignment for a major network news station. Under the hardly watchful, bordering opportunistic eye of a bigwig producer Vick (Christine Adams), Amy goes undercover as Melody, a much younger woman who has supposedly recently converted to Islam and is trying to make her way to Syria to join ISIS.

Surely, it can't be as simple or accessible to join ISIS as making a fake profile picture and liking posts by known members, but for the purpose of the film, both in terms of time and economy, that is how Amy meets Abu Bilel Al-Britani (Shazad Latif). He is a British expat living in Syria, smugly shooting off guns in the street and joking about beheading women. He's attractive and, worse, charismatic, a confident ISIS fighter who puts a soft spin on the idea of joining the world's most infamous terrorist group.

If we're going to watch a feature film that runs like a glorified Skype relationship, Latif as Bilel isn't the worst thing to look at. He sells the role, giving us the chills in both anxiety, fear and excitement when he phones in. For her part, Amy must don a hijab and speak in the demure, innocent way a teenager with heart eyes might. The thrill of the film climaxes as Amy, knee-deep undercover as Melody, reaches a crossroads. Either she can complete the story and expose how ISIS poaches young, impressionable girls or take a chance on a love she feels is blossoming into something more.

The screenlife genre format certainly isn't for everyone. It requires active viewing as the film's action is fluid and taking place all over the screen in various windows. Screenlife stories require a reason for our leads to be spending extended amount of time on a computer, and the ability for the the action to be propelled by texts, video calls, social media stalking, etc. Of the screenlife films to date, "Profile"'s premise is certainly more intuitive for these pursuits. The relationship between a girl and an ISIS member would only take place on Facebook and Skype, and the journalist angle - apart from being inspired by real events and based on the biography "In the Skin of a Jihadist" by Anna Erelle - allots plausibility for why Amy would record everything we are shown. It also ultimately explains the conflict she reaches, that between her heart and her mind.

Unlike the other screenlife films, "Profile" isn't "live". Bekmambetov and cowriters Britt Poulton and Olga Kharina cheat the system here, cherrypicking what they want us to see by allowing the story to move ahead in time, sometime by days, in order to show the progression of a relationship over weeks. It wouldn't work otherwise. Which begs the question: why not just tell this story in a traditional format with cameras, lighting and different locations? Does screenlife offer the best mode of storytelling, both for this film and in general?

The answer for "Profile" is yes, the screenlife aspect works. The thrill is heightened exponentially more than it would be in a conventional film. There aren't the miscellaneous subplots and storylines that would inevitably be included if told in a traditional narrative. Instead, here we are only shown what directly pertains to Amy and Bilel and the undercover mission because that is all that was recorded on the computer. "Profile" is tight and cut of any excess. The focuses are the mission, the relationship and the horrifying reality that this has happened to hundreds of girls to date. By the time Amy reaches Amsterdam, the tension is palpable.

Bekmambetov surely included twists and turns that felt a little too convenient, but the fun of screenlife is that it's unbelievably believable. Or maybe believably unbelievable, depending on your tolerance for somewhat awkward transitions and hyperdrive plot development. The use of the computer, something we are all familiar with, becomes a character unto itself. Once you've adjusted to the quick turnaround from webpage to messaging to video call, sometimes all at once, the film is a thrilling mystery you can't help but need to know the ending.

"Profile" certainly isn't the end of screenlife features. Bekmambetov signed a deal with Universal to partner on another five films in various genres that utilize the format. The ability for filmmakers to spend so little on production and recoup outrageous percentages makes this genre too tantalizing to pass up, and until the plots become contrived or even worse, boring, we will be watching for the new ways in which Bekmambetov has come to entertain us.

"Profile" is in theaters now.