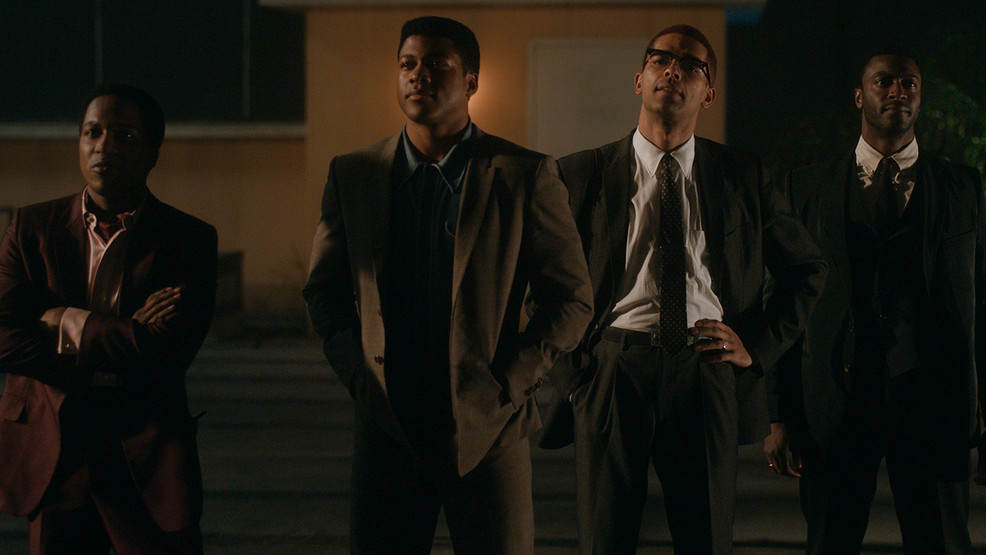 Review: Four icons walk into a hotel room in 'One Night in Miami'

Opening this review with "four icons walk into a hotel room..." may be a lazy, cliche hook, but it also serves as a precise, succinct summary of "One Night in Miami", the directorial debut of actress Regina King that imagines what the interaction (based on a real night from the history books in 1964) would look like when four historical figures shared a hotel room, philosophizing, comparing intellect and pushing each other to be better.

The film's backdrop is a convergence of many things. Broadly, the Civil Rights Movement is in full swing, and white America is unyielding in its viewpoints and "moral" beliefs. Specifically, boxer Cassius Clay (Eli Goree) has just won the the title of World Heavyweight Champion. He was the underdog who took down Sonny Liston, widely regarded as one of the best at that time. He meets up with his old friends to celebrate his victory: civil rights activist and Clay's mentor in joining the Nation of Islam Malcolm X (Kingsley Ben-Adir), football player Jim Brown (Aldis Hodge) and soul crooner Sam Cooke (Leslie Odom Jr.).

If the film feels stage-y, that's because it is based on 2013's 90-minute, one-act play by Kemp Powers. He has also written the screenplay, which is taut in action and verbose in dialogue. The premise almost feels too good to be true, though incredibly, it did happen. Clay's three famous friends were in Miami following his Liston-takedown, and presumably they did interact. Powers takes that grain of a moment and creates the rest, imagining Malcolm X as the preacher, seeking to indoctrinate the others and encourage them to use their celebrity for the betterment of the underserved black community. Clay, just 22 years old, is the cocky, self-assured boxer eager to do more with his newfound fame than punch at people in the ring. Brown is a jaded athlete, looking to pull himself out of the stereotype and create his own legacy. And Cooke, despite evidence that he did advocate for African-American rights and equality IRL, is Malcolm's target, pigeonholed as a greedy artist focused purely on money.

Despite the limited time we have with these giants of their industries, we are willing to overlook the hokeyness of the film's premise thanks largely to the performances, which not only elevate the script, but compel us to keep focus. Ben-Adir and Odom face off in an epic battle of words in scenes that are as appealing as they are tense, as natural as they are explosive. The fearsome foursome do not fight for screen time and presence, but operate like a well-oiled clock, ticking and tocking in tune with each other. Other than the stellar performances, however, there is very little else here to watch, and the film may feel too artificially produced at times, trapped by its rhetoric and singular battle cry, albeit an important one.

Much of the cohesiveness of the film and its portrayal of the real-life people is thanks to King's directorial eye, placing the players around the room in a way that feels intuitive, yet still manages to make the impact she and Kemp intend. King uses inventive tricks like employing mirrors to capture all four characters within the limited space, which never feels like there isn't room for the characters (and their long-winded speeches) to breathe. Kemp's writing includes enough biographical references and small, but important throwaways to make us feel like we are truly eavesdropping on four titans of history who risked their fame and fortune to help better the cause.

"One Night in Miami" is now streaming on Amazon Prime Video.