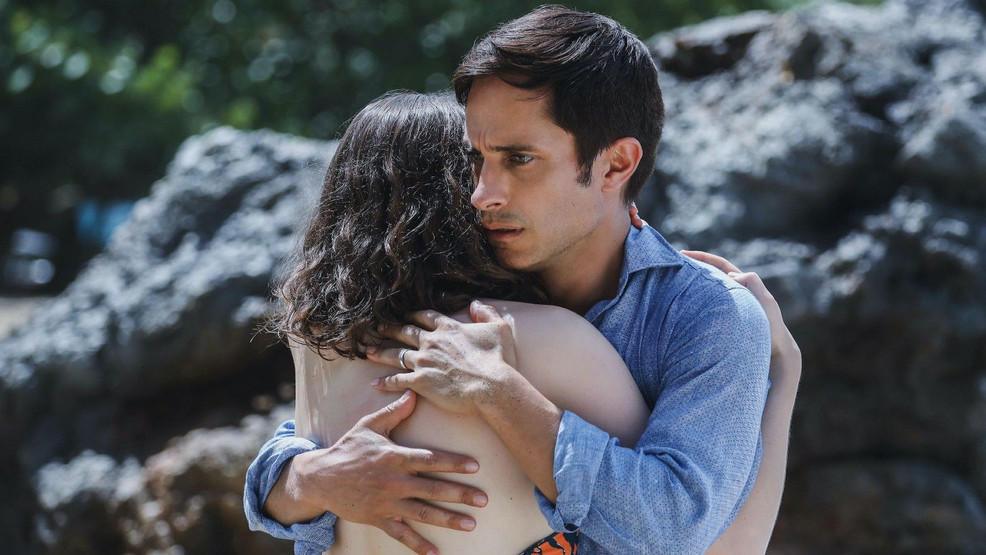 From M. Night Shyamalan, the master of the cinematic "twist", "Old" will age you. It's exhausting growing up, and that feeling has never been captured with more painful, visceral confusion and upending mayhem than in this film. Painful, but for the most part, not captivating. Shyamalan knows what he's doing. He knows what we expect when we tune into his very particular brand of intrigue horror. He wrote the script on how to hook the audience so that they anticipate the drop and unforeseen ending. But the payout in "Old" is not like the "I see dead people" revelation of "The Sixth Sense". We spend too much time trying to connect with the characters in the confined setting that the denouement is not the gasp of shock we would normally expect to feel.

The setup, as in most Shyamalan flicks, has a boilerplate that will surely stimulate your curiosity. A family of four on the brink of being torn apart by divorce faces an even greater threat: a mysterious, nefarious private beach that causes its visitors to experience rapid aging. Guy (Gael García Bernal) and Prisca (Vicky Krieps) along with their young daughter Maddox and son Trent found this idyllic resort by chance, and when they receive an exclusive offer for a day at the secluded beachfront, they can't pass it up. There are other families who received the invitation too: wealthy surgeon Charles (Rufus Sewell), his model wife Chrystal (Abbey Lee), his mother and their daughter Kara; married couple Jarin (Ken Leung) and Patricia (Nikki Amuka-Bird) who suffers from a debilitating epilepsy disorder; rapper Mid-Sized Sedan (Aaron Pierre) and an unaccounted for woman who swam out to sea before disappearing.

As strange things begin to occur, most notably death which creeps insidiously into the cove, the group realizes that not only are they unable to leave the sandy plot completely boxed in by rocky cliffs, but their lives are in immediate danger. At first, it's subtle, but as minutes tick by, it is the children who grow the most noticeably. Older actors gradually replace their younger counterparts. Though the group attempt to escape back through the cliff's passage through which they arrived, they quickly discover that spending any time in the cavernous path causes them to pass out before they get anywhere near an exit.

What is happening? Why are these people trapped in a Utopian spot? For a while it seems like perhaps Shyamalan is concerned with a moral dilemma or an intangible lesson he hopes to relay to viewers. You know, the thing about appreciating the moment. Guy is focused purely on the future, while Prisca is stuck in the reedy marshes of their past. Chrystal is too focused on herself to pay her daughter any mind, and Charles is fighting his own mental battles. Having children is nature's clock, allowing us to measure time with more quantitative measures. Within a few hours Maddox, Trent and Kara (portrayed in older iterations by Thomasin McKenzie, Alex Wolff and Eliza Scanlen, respectively) have changed actors twice as they reach their mid-teens. Their speedy maturity is jarring. Imagine bypassing puberty - and all the emotions those carry - in a matter of minutes and hitting adulthood, your foot on the pedal and no brake in sight. It's draining, and the riddle loses its allure as the story performs circles around itself.

Based on "Sandcastle", a graphic novel by author Pierre Oscar Levy and illustrator Frederik Peeters, "Old" operates one sustained note that grows longer and louder as the mystery unfolds, but it never varies. The action and character development are stuck on a hamster wheel, returning time and again to the same emotionally heightened scenes: characters trying to escape, questioning their situation, turning on one another then back to the top. The only fun we have is when we are finally allowed in on the secret reason for their unfortunate plight. However, it's not enough to explain away some of the science questions we have (all the questions and certainly too many to list here) or to bring us greater empathy for the characters, making this work less like some poignant, existential excerpt from "Paradise Lost" and more like a flashy segment from "Paradise Over the Hill".

"Old" is in theaters now.