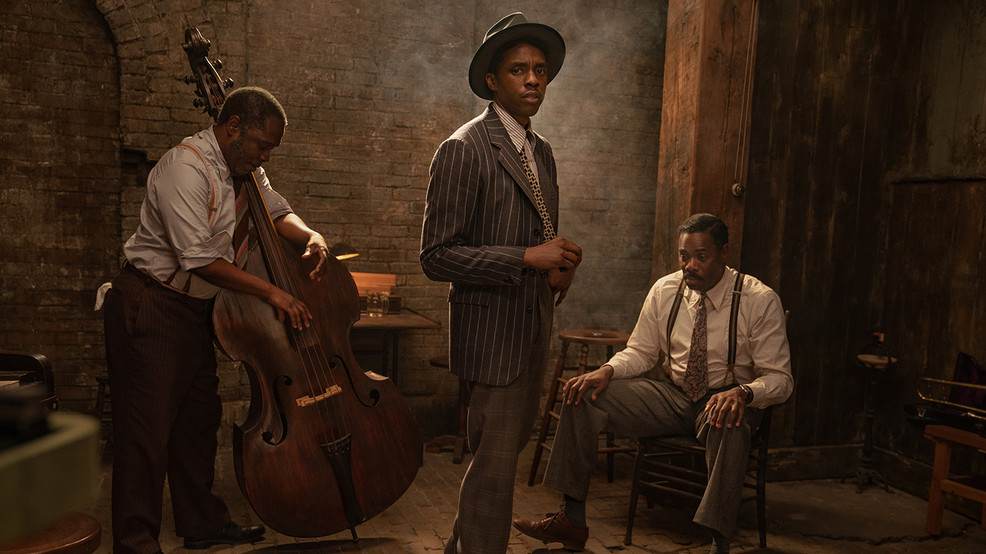 In his final performance, Chadwick Boseman is the thing that legends are made of. The late actor had a penchant for roles based on iconic historical figures: James Brown in "Get On Up", Thurgood Marshall in "Marshall", Jackie Robinson in "42" and even prince T'Challa in "Black Panther" if we're talking fictional universes. In "Ma Rainey's Black Bottom", Boseman succumbs to the tragic force that is Levee, a trumpeter in the band supporting Ma Rainey. Known as the "Mother of the Blues" and a real-life singer in the early 20th century, Ma was one of the first African-American performers to record her songs. The film is based on a play of the same name by famed playwright August Wilson, whose works predominantly explore the life and conditions of the Black community in the last century.

Levee, though not a royal or record-breaking ball player, is an even more fascinating character study, and in Boseman's hands, he is wistful, ambitious and tawdry, a melting pot of complex, often contradictory emotions that course through Boseman, one of the finest actors of his generation. Levee is the young hotshot with a big mouth and even bigger ideas. He joins the veteran musicians in Ma's band, Cutler (Colman Domingo) and Toledo (Glynn Turman), as they spend most of their time waiting around before recording her popular hits including "Ma Rainey's Black Bottom". It refers to a popular dance known as the "Black Bottom", though it's hard not to think of its other possible meanings. In many cities, the term was used to describe African-American communities, and, perhaps more obviously, it could reference an anatomical part of the body.

The film, like the play, revolves around this recording session that takes place in Chicago, 1927. Ma Rainey (Viola Davis) is a larger-than-life persona, who would come across as fake as the metal in her teeth were it not for the fact that she really lived, gold caps and all. She runs a wild ship, consistently combative with the studio producers who, in turn, are trying to control her, and possibly screw her over in the process. We certainly don't blame Ma for her wary disposition and no-nonsense attitude. A Black woman in show biz rarely got this shot; she couldn't let anyone ruin it for her. The band members spend their down time philosophizing on all things. The consistent undercurrents for their discussions and, often, disagreements are obvious: dreams lost and, consequentially, the rage that stems from systemic inequality.

This is the Jim Crow era, as evidenced by Ma's entrance to the studio (and the film) which is tainted by an altercation with a white police officer who can't fathom a Black woman owning her own car. To make up for it, Ma is demanding and exact. She refuses to sing without a Coca-Cola beverage. She needles the studio heads until they pay her cousin for his bit part introducing the record. She storms off when she deems it necessary to make a point, and she never wavers. But it is not Ma who has our focus. It is the young men in the holding room.

Which brings us back to Levee, the freshest of the bunch who has a lot to prove. He's late to the studio because he stopped in to buy a new pair of swanky shoes. But that's all a show, because underneath the hard, confident shell he has an exposed weakness that is ultimately his downfall. He jumps quickly to anger at the slightest hint of derision. Boseman plays all of Levee's many facets. Like a faucet, he changes Levee's temperature from cool to hot as naturally as one might step from one room into another. Levee has seen the dark side of the world, and, deep down, he knows his chances of making it are fraught with roadblocks, leading to an ending straight out of a Shakespeare tragedy.

Director George C. Wolfe, who is mainly known for his work on Broadway, has the task of making a small basement feel like a stage large enough to hold the incredible talents of Boseman and Davis. Wolfe and his actors use the confined space they are given by the play to further our sense of entrapment. Even Ma, with her indelible success, is at the constant risk of being shoved back in a jar, the lid threatening to twist on tight. The white music producers flit in an out of the studio from a parapet above the Black performers, another metaphor in a film filled with meaning.

As she did in another recent film adaptation of a Wilson play, "Fences", Viola Davis does not play Ma Rainey the way we think she should be played; she plays her as she undoubtedly must have been. There is verity to her performance and, like Boseman, the ability to deliver a feeling direct into the audience's heart without having to say one word. "Ma Rainey's Black Bottom" is a slice of the past, for better or for worse, that has certainly never felt more timely.