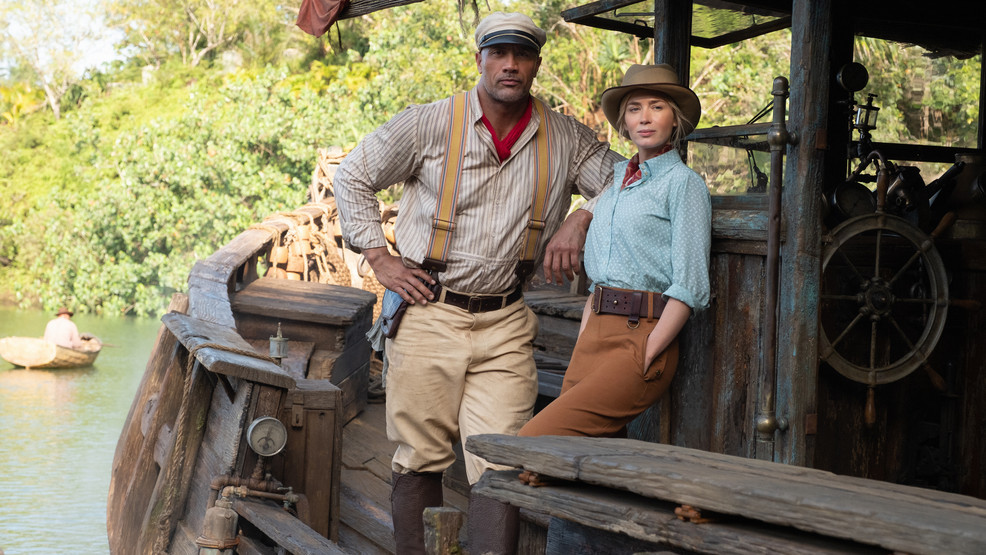 If you've ever ridden the Jungle Cruise ride at Disneyland - either once or five hundred times - you'll know that the attraction's primary appeal is twofold: a pun-heavy skipper with a knack for delivering even the most cringey dad jokes with a kooky charm that will eventually grow on you; and a place to take a break from your 10-mile day for 15 minutes in sweet, cool, unabated shade having a rest in a slow-moving vehicle that will also entertain the munchkin Disney-devils still hyped on Dole Whip.

"Jungle Cruise", Disney's newest ride-to-screen adaptation, finds the same sweet spot as its physical counter park (get it, get it), relying heavily on an imaginative, action adventure script, the universal appeal and growing superstardom of Dwayne Johnson and the incredible charisma and screen presence of Emily Blunt, who has certainly lowered her brow for this one. Then again, she is Disney's newest live action darling, having revitalized Mary Poppins three years ago. But Blunt has an unmistakeable versatility that allows her to flit from serious dramas to smutty comedies. In both, she seems at home and fully invested, and in this high concept blockbuster, we can't keep our eyes off of her.

These factors are why the world created in "Jungle Cruise" feels as lived in as it does. Surprising, but perhaps not. Disney has done this before, translating a park attraction into a feature length film. There was the bad ("The Country Bears"), the very bad ("Tomorrowland"), the mediocre ("The Haunted Mansion"), the cult classic ("Tower of Terror", I could not recommend more), and, of course, the mecca of this subgenre ("Pirates of the Caribbean") which gave hope for all future properties. "Jungle Cruise" doesn't have quite that potential, though for some it may be an easy watch with some chuckles and enough action to keep your eyes in the boat.

Blunt stars as Dr. Lily Houghton, a forward thinking botanist denied recognition by the male-dominated societies that ruled the early 20th century (well, all of the 20th century, but who's counting). She doesn't care about accolades or club membership; all she is after is the long-fabled Tree of Life which has, according to centuries of South American lore, the incomparable power to heal, a property she would use to reinvent modern medicine. In order to acquire a flower petal from this bountiful tree, she first steals an arrowhead with an ancient inscription that will lead her in the right direction once she is in the Amazon.

However, for someone who can't swim, let alone man a boat down a dangerous set of river channels, she requires a guide. Enter Frank Wolff (Johnson), a vicarious skipper who gives tours of the Amazon to, then cleverly swindles, wealthy vacationers. He puts on a show, hiring locals to pose as adversarial tribes folk and even setting up his own on-demand waterfall. (Again, if you know the 1950s Disneyland ride at all, you'll recognize a few of Frank's jokes, most famously the "backside of water" gag that is a staple among ride attendants.)

Lily and Frank, along with her loyal, metropolitan brother MacGregor (Jack Whitehall), an obvious attempt by Disney to rectify their record on LGTB representation, brave the rapids and hostile jungle wilderness, but more importantly they evade and thwart Prince Joachim (Jesse Plemmons), a German villain with a comical submarine and insatiable lust for power. He employs the supernatural help of the immortal conquistadors who had been enslaved by the jungle four hundred years ago. Led by Aguirre (Edgar Ramírez), the zombie knights most closely resemble the undead buccaneers from "Pirates of the Carribean" and, despite their crumbling appearances and deadly super powers, prove to be the lesser of the two evils in the film.

Plemmons, as always, is a salty, savory and weirdly enticing malefactor. There are few films he does that aren't better off because of his very presence. Luckily for us, the two leads are a majority of the draw and nearly one hundred percent the reason "Jungle Cruise" makes it to its destination, sputtering in a wonky boat on an unconventional mission in a place that feels less like the actual Amazon and too much like a stage in Hawaii attempting to replicate the magical world for which Disney is known.

Because even these many appealing factors don't always add up to a hippo of a hit. "Jungle Cruise", like the ride upon which it is based, can offer only the limited aforementioned things: a handful of jokes, a quiet, cool theater in which to sit, and a journey down a river in a boat. The rest is flashy and goofy-footed, both reliant upon and constricted by the elaborate storyline, the extensive CGI and only a tiny corner of Disney's fanbase. Have you met a Jungle Cruise fanatic? It's highly unlikely you have, particularly in 2021, given the backlash the ride has recently received for its problematic and racist imagery. Those aspects don't make on the screen luckily, but what does still is not enough to spark much magic.

"Jungle Cruise" will release simultaneously in theaters and on Disney+ with Premier Access on Friday, July 30.