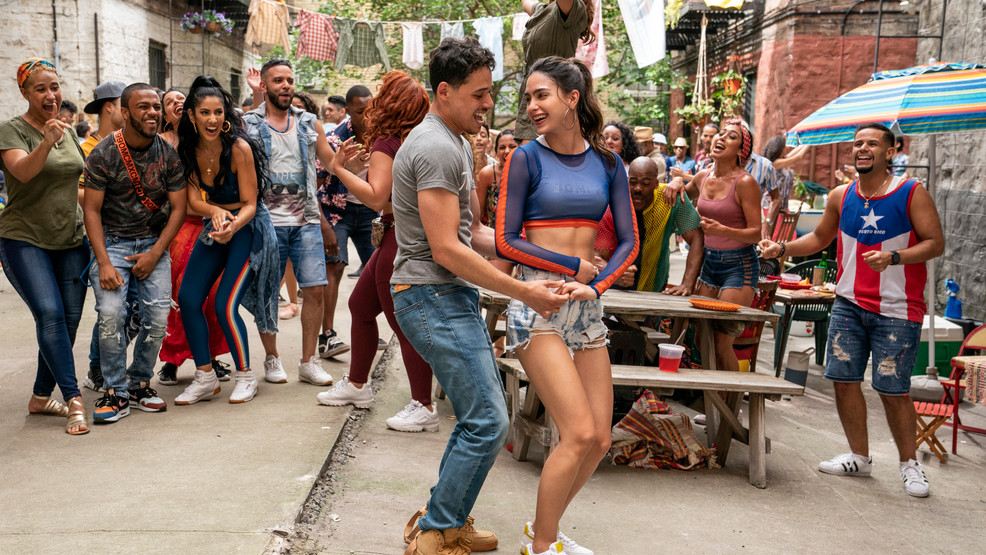 Review: 'In the Heights' is poignant, thought-provoking, joyful & cathartic

It's hardly a surprise that after 2018's blockbuster hit "Crazy Rich Asians", a colorful, wildly entertaining adaptation of the book that told a story of a Romeo and Juliet-esque relationship between an heir to a Singaporean empire and a first generation Chinese-American, director Jon M. Chu's next project is an equally colorful, no less significantly diverse musical set in the vivid, hopeful Manhattan borough of Washington Heights. Based on Broadway's hit musical which won four Tony Awards in 2008, "In the Heights" is not just poignant and thought-provoking, it is a joyful, cathartic scream at the pandemic-made void that will (if all goes to plan for the sake of Warner Bros.'s accountants) usher back a large chunk of movie-goers for the full theatrical experience.

Though Chu is the director with a vision, Lin-Manuel Miranda is the father (and genius) behind the source material. His generation-defining, genre-warping 2015 smash musical "Hamilton" was as much a culture movement as it was a Broadway production. A first-generation American (his parents came from Puerto Rico) Miranda started penning "In the Heights" in his dorm room as a way to kill time while his girlfriend was studying abroad. What hit the stage years later was a from-the-heart ode to the immigrant experience, and his style, which is fully realized by the time he creates "Hamilton", is a captivating amalgamation of rap, Latin music, dance and musical theater.

In the original Broadway production, Miranda also starred as Usnavi (Anthony Ramos takes it in the film), the owner of a corner bodega in the middle of his beloved Washington Heights neighborhood. There isn't any linear, straightforward way in which the film introduces us to our characters, but immediately immerses the audience into the people that define the town. Abuela Claudia (Olga Merediz) is the town matriarch who has a hand in everything; Daniela (Daphne Rubin-Vega), Carla (Stephanie Beatriz) and Cuca (Dascha Polanco) run the hair salon; Kevin Rosario (Jimmy Smits) owns the cab company, and his daughter Nina (Leslie Grace) is returning home from her first year at Stanford; Benny (Corey Hawkins) helps manage the cab dispatch and has flirty chemistry with Nina; Vanessa (Melissa Barrera), Usnavi's crush, is a salon worker who dreams of more.

The film, like the play, is set in Washington Heights, but it also uses Washington Heights as a focal point. The characters are as much a part of the setting as the setting is one of the characters. "Crazy Rich Asians" was also heavily reliant on the substantive role that Singapore played, both geographically and within its social circles. Similarly, Washington Heights has a very specific configuration, and Chu has an obvious talent for laying down a solid roadmap that allows for proper orientation within the film's setting without seeming like a blatant set-up.

Abuela Claudia may be the mother of all Heights residents, but it is Usnavi who is everyone's brother - a stalwart, reliable figure who, despite his love for the place, is fighting his growing unease and insecurity with how Washington Heights is changing. Gentrification is the villain here, but it doesn't take the form of an intrusive construction hat laying down plans or Starbucks popping up at every corner. The threat is revealed when Rosario must sell his company to pay for Nina's tuition, or when Daniela must move her salon elsewhere. Set in the sweltering summer leading up to and passing through a blackout, the film captures that unbearable feeling of being trapped in a situation you can't change. Though the film is often a sung-through musical, the political and social statements the film makes - about aforementioned gentrification, as well as the struggle of immigrants in American big cities, the rise of Dreamers, etc - ground "In the Heights" so that we always feel rooted in Washington Heights, not Oz.

The chunk of what happens throughout the film consists of small details that make up the greater picture and contribute to the strife of this shrinking working class. There is an unclaimed winning lottery ticket that hangs over everyone, a sum of $96,000 that would be life-changing for its recipient. Everyone dreams of more, but not necessarily "getting out". There is a real love for Washington Heights that Miranda is sure to make crystal clear.

The film is also a star vehicle for many Latino actors who portray the culture's diaspora with real intimacy. To call it an ensemble is an understatement. The film operates like a heart - the characters and storylines are arteries, working together to pump blood and life into the work as a whole. Miranda makes an endearing cameo as the Piragua Guy who has a particularly symbolic run-in with a new ice cream truck trying to run his small cart peddling Puerto Rican shaved ice out of business. The lives of those in Washington Heights is far from glamorous, but there is a hopefulness that defines their relationship with family, work and the trials set before them. It is this honesty and vulnerability that makes "In the Heights" such a pure watch.

"In the Heights" is in theaters June 11 and streaming on HBO Max.