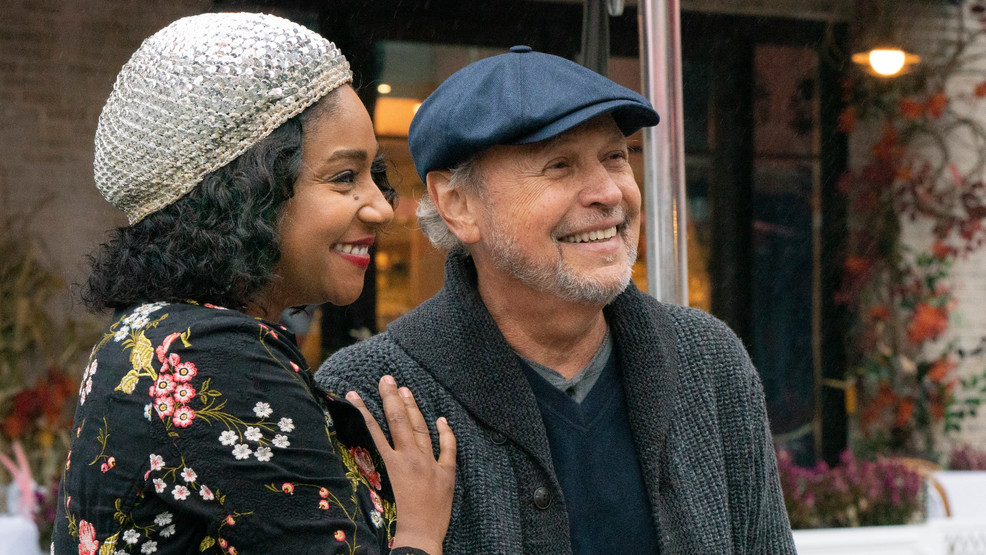 In the sweetly predictable dramedy "Here Today", the unconventional pairing of veteran comedian Billy Crystal (who also directs) and hot new voice Tiffany Haddish is perhaps not as unusual as it may seem. The heart of the buddy comedy genre is the necessity that the leads who take us along on their inevitably harebrained schemes must be either physically opposite (Chris Farley/David Spade), on opposite ends of the emotional spectrum (Vince Vaughn/Owen Wilson) or both (Eddie Murphy/Nick Nolte).

In this case, it is certainly both, and though the duo have equal on-screen charisma and appeal, there are two crucial elements the film is lacking: chemistry and plausibility. Crystal's Charlie Burnz is an aging comedy writer with endearing chutzpah and a veteran's eye for what's funny. He's the oldest writer by far at the sketch show where he slowly begins to lose connection with his green coworkers and young audience. It isn't just that he can't connect; his deteriorating mental health is proving to be nearly insurmountable. He has to focus on directions as he walks the streets of New York City to get to work. He forgets names, even the names of people he's known for years. He can't remember which locker is his at the sports club he belongs to, despite the fact that he's had the same one for decades.

He hasn't told his family this life-shattering news, choosing instead to deal with the onslaught of issues that come with dementia on his own. Then fate brings Emma Payge (Haddish) into his life. Her ex-boyfriend bid on a lunch with Charlie (winning the honor for a measly $22), and so to spite her ex, she took the free lunch for herself where she proceeded to order the most expensive seafood dish...and have a terrible allergic reaction that sent her to the emergency room.

Yes, Will Smith in "Hitch" performed the same gag, and yes, it's hard to give Haddish the credit she deserves because of it. Haddish commits to the facial prostheses and her timing is always good, but it's been done before in a scene that produced iconic imagery and, for some fans, have defined an actor's career. It also seems a strange introduction for the two characters. Emma is polite, but clearly only wants a free meal. She's also a singer who performs on various corners and subway stops around the city.

Emma promises to pay Charlie back for the medical bills he kindly covered following the allergic reaction. And for a second, that is what brings them together. She shows up at his place unannounced with bags of cash. He invites her inside for chats where we learn plenty about Charlie - his dead wife, his daughter (Laura Benanti) who hates him, that one time at lunch when he didn't recognize his own son (Penn Badgley), his granddaughter's impending bat mitzvah - but we learn very little about Emma.

And this is what is hard to shake about "Here Today": Emma's complete lack of character development. This is Charlie's story. We don't leave his side and POV, and we are given total understanding as to the traumatic events from his past that have shaped him, as well as the increasing symptoms he is experiencing from the dementia that is beginning to storm the gates. Charlie's motives are apparent and built upon, scene after scene.

Emma at face value, stripped of the vibrancy and faux-depth that Haddish could infuse into a lampshade (let alone every character she portrays), is motiveless and contradictory. She meets Charlie as a scam for an expensive lunch, but quite quickly becomes his confidante, his flirty friend (in the most cringe moment of the film's runtime, Charlie questions whether he and Emma slept together after waking up in the same bed; in the second most cringe moment, she assures him that they just spooned), and, eventually, his caretaker. She gives up her identity to care for a man she doesn't know and who, very shortly, won't know her. Some may call it selfless; I call it a senseless can of give me a break.

Not to say this relationship isn't impossible, but, for the viewers, Charlie and Emma's bourgeoning friendship is stunted by his inability to talk about anything except himself and by her susceptibility to throwing herself into an unsavory situation in which she is hated by his family because they don't know the truth and in which she must lose herself and her career to help a man she's just met.

"Here Today" is an innocent, if not unenthusiastic, tale of help coming from the most unlikeliest of places. It doesn't mean any harm, but certainly won't leave a mark either.

"Here Today" is in theaters now.