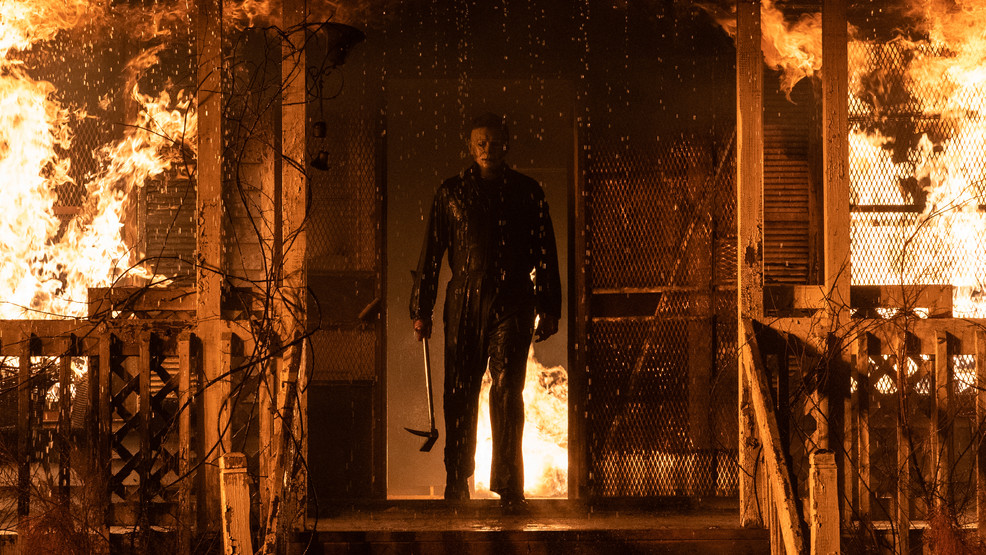 Review: 'Halloween Kills' is a long layover on the way home from a blowout trip

When Michael Myers returned to Haddonfield in 2018's "Halloween", it had perhaps the most bodacious ending: longtime adversary Laurie Strode (Jamie Lee Curtis), her daughter Karen (Judy Greer) and granddaughter Allyson (Andi Matichak) tricked and trapped Michael in her basement. They then set the entire house on fire and watched as flames engulfed the calm, calculating figure of the masked maniac. Michael was surely toast.

And yet, we wouldn't be here if that were true, would we? Somehow - namely with the aid of a dimwitted fire department who saves the soulless serial killer - Michael lives! He's escaped! Again. He has too many injuries to count, at least a few of which would, in the real world, be fatal, but he isn't bothered by the rules and logic of said real world. This is Michael Myers, and he survives in order to terrorize another Halloween night.

In this case, it is the very same 2018 Halloween night from the last film, a cute, workable concept...if his demise from three years ago hadn't been so gratifying. Now, as Laurie has emergency surgery to save her life, those around her set course to take down Michael no matter the cost. Some of his victims from over 40 years ago have popped back into the picture and are certainly on his naughty list: Anthony Michael Hall as Tommy Doyle, the kid Laurie babysat in "Halloween"; Kyle Richards as Lindsey Wallace, another child from the original; Nancy Stephens as Marion, who was in the first film, "Halloween II" and again in the anniversary film, "H20: 20 Years Later".

Of course, this set of "Halloween" movies - "Halloween Ends" is slated for release next year - completely ignore the eight others that came after the original. Writer-director David Gordon Green has made this conscious choice to overwrite Myers' previous scuffles, which cleans the slate and makes this new saga better confined within a less complicated universe. It also makes it more interesting. There aren't petty details that need to be explained away, and the leading lady herself, Laurie Strode, can live to see another Hallow's Eve, given that she was technically killed off in "Halloween: Resurrection".

If you're looking for a dynamic middle piece to the trilogy, this ain't it. It's not like how "Back to the Future Part II" was a captivating follow-up, cult classic to its groundbreaking original. Or how another second in the series, "The Dark Knight", actually won a couple Oscars. Instead, "Halloween Kills" is a long layover on our way home from a blow-out trip. Hopefully returning home for the third installment will feel as good as it does to sleep in our own bed after a lengthy vacation, but this part of the travel is as painful as it is forgettable.

"Halloween Kills" is doomed from the start, but ultimately accepts its own downfall thanks to several factors. It does not find a reasonable way of keeping Myers alive without completely undermining the end of the previous film (which felt pretty darn airtight). It relies on audiences to believe that a man - however strong and insane, but human flesh nonetheless - can survive not only grave bodily harm, but he can outsmart and outfight hordes of people through what must be immense pain and detrimental blood loss. It does not focus on any relationships this time around, forcing each character to have singular, isolated experiences.

These minor discrepancies are just a poorly veiled attempt to set Michael up as some superhuman, supernatural force of evil ("The more he kills, the more he transcends into something else impossible to defeat") so that the next installment can include an epic, inventive showdown that will *fingers crossed* redeem this paltry installment.

No, the greatest error that "Halloween Kills" makes is strapping Laurie to a hospital bed and forcing her to sit this one out. Hall steps in as the great male protector, pounding his chest and inciting a rabid mob to, first chase after the wrong mentally ill inmate, then out onto the streets of Haddonfield, stalking parks and alleyways in the dead of night. His rallying cry, "Evil dies tonight!", is less cinematic showmanship and more a tasteless ploy by the marketing department to hammer home the film's tagline.

What we're left to savor are a few scares, however scant and unoriginal they may be. The back door found open, swaying in the breeze. A glimmer of white in the car's rear-view mirror. They are hardly reinventing the wheel with this one, and actually it could be said that "Halloween Kills" the horror flick libido of even its most loyal fans.

"Halloween Kills" is in theaters and streaming on Peacock.