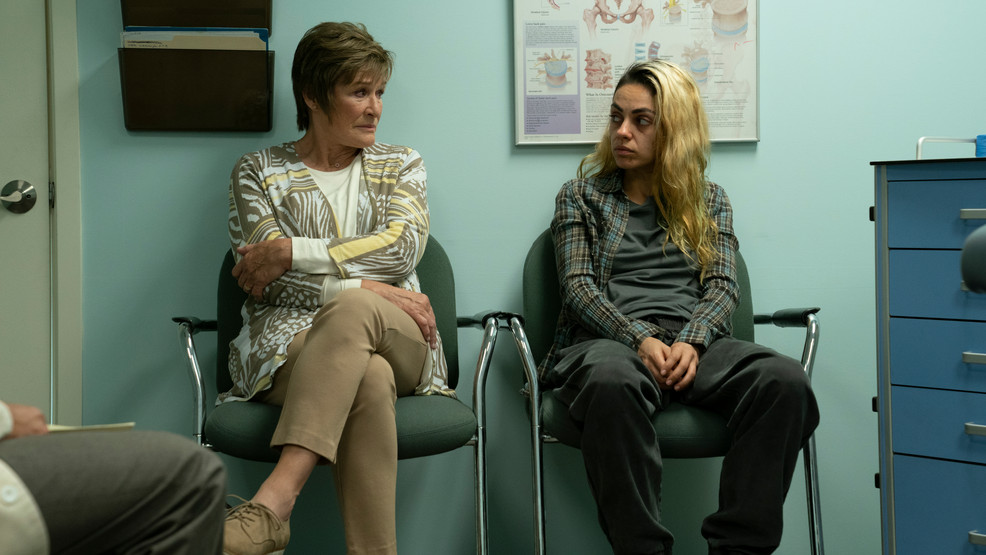 Review: 'Four Good Days' is as rooted in reality as it is lost in hyperbole

God bless Glenn Close. She was pushed aside at the Academy Awards again this year - her eighth Oscar nomination without a win - and yet, she is easily one of the most talented, versatile and dependable actresses in Hollywood. She certainly elevated last year's well-meaning, but ultimately tone-deaf family drama "Hillbilly Elegy" for which she was nominated in a performance that was transformative and elevated the film as a whole. In fact, you could argue she carried that one on her bare back.

You would think she would be tired, but no. Here she is again with a rock solid performance in a film that aims to be more than it is. Mila Kunis stars alongside the veteran in "Four Good Days", a snapshot of the strained mother-daughter relationship blown open by lies, betrayal and the opioid epidemic. Based on a Washington Post article by Eli Saslow, "How's Amanda? A story of truth, lies and an American addiction", the film is as harrowing as it is indulgent, as rooted in reality as it lost to hyperbole.

They say a mother is only as happy as their unhappiest child, which is why Deb (Close) is miserable. Her daughter Molly (Kunis) is a heavy drug abuser still in the thick of drug binges. She shows up to Deb's home unannounced, using every excuse and plea under the sun in an attempt to gain admittance in her house. She doesn't want help. She doesn't want shelter. She wants to raid the house for anything she can sell to get her next hit, whatever that may cost her relationships with those that love her.

Deb is wise to her schemes. She's helped Molly get clean fourteen times. She's had jewelry, clothing and every valuable item she owns stolen in exchange for drug money. Every door in her house beeps when opened as a precaution against her conniving daughter. There is no trick Deb can't see coming, and she is beyond tired of the lengths she must go to protect herself from her own child. The fact that Molly has two children of her own and an ex-husband (Joshua Leonard) struggling with his own relationship to sobriety only complicates her emotions with feelings of guilt and helplessness.

"Four Good Days" does this part right; Close and Kunis perform a well-timed, beautifully choreographed dance that generates sparks throughout their combative, personal, history-laden interactions. We feel for Deb when she is duped, and we never quite give in to trusting Molly, even as she begins to prove herself. Molly must endure four days of sobriety to clear the drugs from her system. Only then will she be eligible for a miracle shot called naltrexone that is supposed to dull her pleasure receptors and lessen or eliminate her ability to get high. As someone who has been fighting these demons for a decade - since a doctor prescribed her pain medication in high school for a small injury and pharmacists gave her unlimited refills - this monthly shot is her only hope at getting and staying sober long enough to do the mental and emotional work needed to return to her "normal" life.

Kunis dons Molly's mouth with nubby, browned teeth and swollen gums, a product of years of neglect and drug use, and slides her jittery hands through Molly's stringy, poorly died yellow hair. Close wears Deb's short haircut and middle class mom clothing with comparable persuasiveness. The transformations are convincing, but the film itself, with a slow-building, momentum-less script allows us too much time to sit in and think on their performances. The film lingers on Molly in the garage, chainsmoking as Deb frets in the house, then shifts them only slightly to the living room. There is too much sitting around, letting the four days inch by instead of propelling the film with its own sheer impetus.

There are deeply moving scenes that invoke the true-to-life feelings of guilt and gaslighting that result from trying to help someone in the throes of addiction. Occasionally, it almost mimics a thriller in that way. Who do we believe? Is Deb overreacting, or is Molly that conniving? However, the film also plays up the dramatics, and we are ever-aware that we're consuming a film about the subject, rather than losing ourselves to the characters and their dilemmas. The casting of two high-profile actresses is certainly a double-edged sword. The performances from our leads, Close and Kunis, are solid, but their celebrity hinders the anonymity required to fully invest in the film which has cumulatively four good minutes that leave us horrified yet enthralled by its morose addiction tale.

"Four Good Days" is available on premium video on demand.