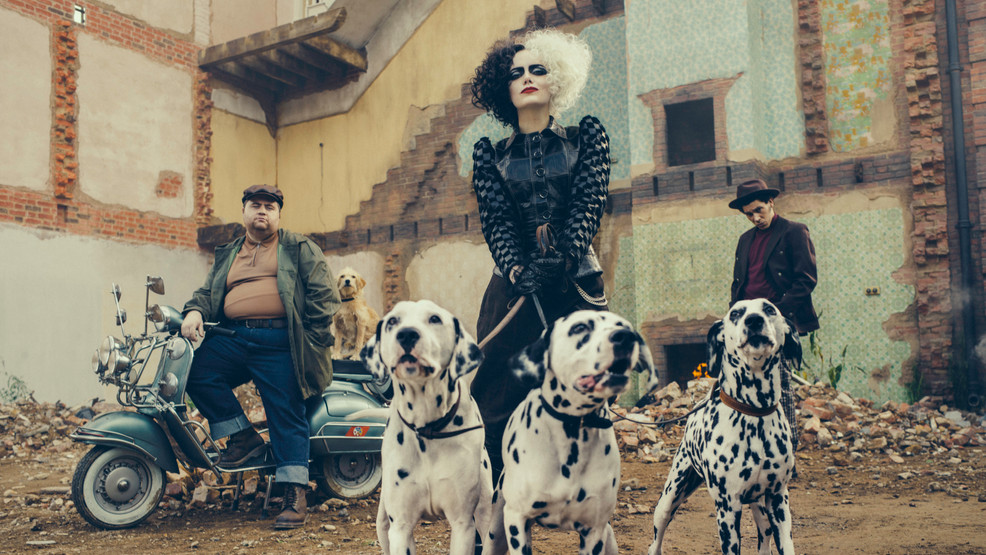 Live action redos of animated classics have been all the rage lately. Disney in particular found its lucrative, formulaic sweet spot, a cash cow that produces a comical amount of box office gold with a simple flick of a fairy godmother's wrist. Reimaginings of these well-loved properties appeal to both new generations of kids who have easy access to streaming content, as well as to the Millennial crowd who place ridiculous sentimental worth on the stories and their characters (*gulp*, guilty). But the blueprint is stale. The films typically follow the source material with razor sharp accuracy so as not to offend the fans who aren't always agreeable to change.

"Cruella" is here to shatter that mold. It's been 25 years since its predecessor "101 Dalmatians", hit theaters. Starring Glenn Close as the pro-fur antagonist, the film was a live action remake of the 1961 classic, "One Hundred and One Dalmatians", which, itself, was based on a novel by Dodie Smith called "The Hundred and One Dalmatians". (Same, same, but slightly different) The grapevine has made changes to Smith's original story through the years, but none so much as this new iteration.

"Don't call it a remake" would certainly be the motto if "Cruella" had one. In fact, gone are 98 of the Dalmatians, as well as the rigid confines of a straightforward puppy caper. Our lead is a far howl from the one-note villain who, famously and horrifically, stole and attempted to skin dozens of innocent puppies. In the pre-woke Disney universe, Cruella was a mass murderer, and that just doesn't stick nowadays. It's not only better for our conscience, but it frees screenwriters Dana Fox and Tony McNamara from the Draconian shackles of an outdated premise.

Emma Stone stars as the titular character, a misunderstood ingenue named Estella. She's born two-toned, half of her hair black while the other a stark white, not only setting her apart from her ordinary peers, but representing her dual personalities: empathetic Estella and conniving Cruella. Her childhood is wrought with disappointment and heartbreak, but Estella always pulls herself up by her bootstraps, finding survival and companionship in sharp Jasper (Joel Fry) and dim-witted Horace (Paul Walter Hauser). She dreams of working in fashion, which brings her into the employment of The Baroness (Emma Thompson), a high brow designer with tolerance for perfection only.

Thompson never disappoints, and, like her character's three vicious spotted hounds, she has us on a tight leash throughout the film, so enamored are we with her performance. She is incredible, not to mention wickedly believable in a role that requires immense confidence and impeccable timing. Stone, for her part, mixes Cruella with sweet vulnerability and stone cold insanity that is more reminiscent of a super hero character than a Disney one. She's like if Harley Quinn had an origin story like "Joker", but with softer, PG-13 edges. The over-the-top make-up and hairstyling - her face is painted a very Quinn-like white and her hair is poofed wildly around her head - only fuels the comparison.

Despite her name, Cruella isn't all that evil. In fact, her biggest crime might be the fact that she's a woman trying to stand out in the punk rock revolution of the 1970s, which is when the film is set. Her peers are homeless thieves and a fashion-forward outcast (John McCrea). Anita (Kirby Howell-Baptiste) and Roger (Kayvan Novak) make immaterial appearances, but the whole gang makes it in. The understated beauty of the film is that Cruella has no love interest. In fact, there isn't a "love" angle at all, and the admirable message is that the only person worth betting on is yourself.

"Cruella", a self-identifying "caper comedy-drama", runs the gamut in terms of tone. It's kooky at times, fast-paced at others, pleasantly cynical, but also critically optimistic. Though the Estella/Cruella's dramatized hairdo and traumatic childhood feel like gimmicks - or perhaps like somewhat lame attempts at prior associations - director Craig Gillespie finds his stride by the end of the first act, sweeping us up in vendettas, lies and ambitious women. For once, it is better the de Vil you don't know rather than the one you grew up on.

Despite its Disney roots, "Cruella" sets it sights on a more mature audience who can appreciate its dark overtones while still providing a child-safe viewing for the young ones who might be milling about. (Cruella's aforementioned dramatic look may scare some kids, and, ironically, the three Dalmatians that are featured could affect children who scare easily.) Otherwise, it is clean, tame entertainment. The film has taken something old and made it fresh once more, a necessary facelift that doesn't sellout for a modern, technology-ridden retelling. The new and improved Cruella is here, and you have the de Vil to thank if she doesn't stick around for good... or at least a sequel.

"Cruella" will release simultaneously in theaters and on Disney+ with Premier Access on Friday, May 28.