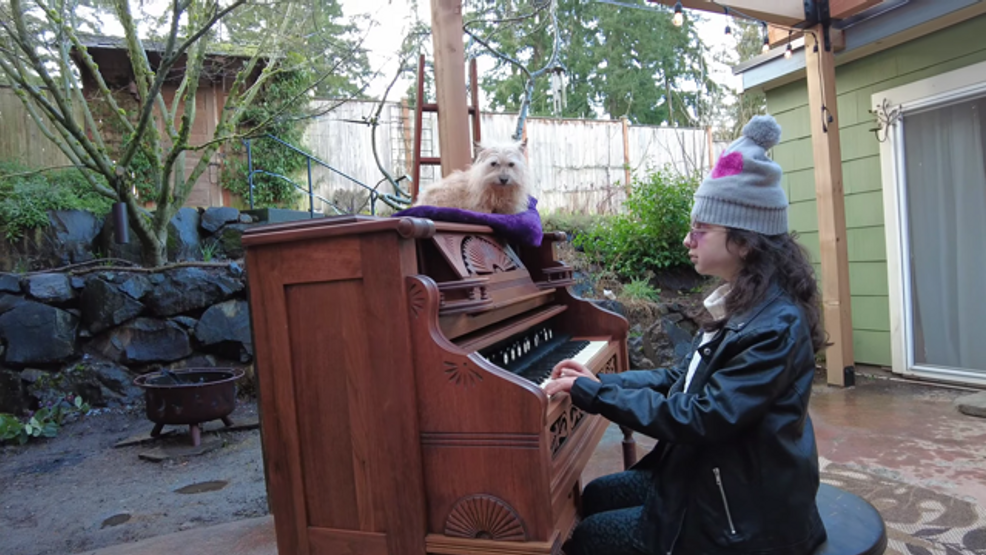 Zoe Newton’s parents are always ready to whip out their phones to capture the songs she sporadically sings. If the songs aren't filmed, they’re gone forever; the 13-year-old from Seattle is blind and can’t write down the words, but that sure doesn't stop her creativity from flowing at all times.

You never know when she’ll come up with a toe tapper, like her recent hit, “Hey Cooper,” a song about a family friend’s dog that died far too young. Her mother, Kellie Newton, thought the tune was catchy and sent a very rough draft to her nephew Christopher Newton, who just so happens to be a music producer and owner of Luna Sound recording studio in Seattle.

He agreed and said with some work, it could be a great song. Kellie wrote down all of the words that Zoe sang, helped her finesse them to give it the shape of a song, and “Hey Cooper” was born. They shot a video to go with the song and put it up on the YouTube channel Kellie has kept for Zoe since she was a baby.

“It all just comes out of her head,” said Kellie. “I don’t know where all this stuff comes from. It just comes out as a fully conceived melody and song in terms of theme and essence out of her.”

At the age of one, Zoe was diagnosed with a rare bone disease that required a bone marrow transplant. The genetic disorder, called Malignant Infantile Osteopetrosis, led to her blindness, among other medical complications, including limited mobility in her wrists, which places an extra challenge when she plays the piano.

But Zoe, who goes by the stage name Zoe Elan, doesn’t let any of this deter her from doing what she loves – playing music and singing. In 2020, Zoe was diagnosed with a social communication disorder, which made the pandemic particularly challenging for her, yet perhaps opened the door to bolster her musical gift.

“She had no way to practice her social skills,” said Kellie. “So music became her primary outlet in the last year, which supercharged her already substantial skill base.”

Zoe has been enamored with music since she was very young.

During a visit to her grandparent’s house at the age of three, she discovered their Yamaha keyboard and was instantly mesmerized by the instrument. Her grandparents sent her home with it and she would spend hours sitting in front of it each day.

“It was her number one source of entertainment,” said Kellie. “At first, it sounded like a three-year-old pounding on a keyboard, but then a few weeks later, I started hearing songs she had figured out how to play, like 'Twinkle, Twinkle Little Star.'”

Kellie started teaching Zoe the names of the notes when she was around five years old. Zoe would hit the key and ask for the note. Her mother would tell her which one it was. Then one day, Zoe identified the note on her own. That’s when her parents realized that she had developed perfect pitch. She has never taken formal piano lessons. In fact, professional pianists that evaluated her when she was very young suggested keeping her out of lessons because she was teaching herself. Instead, they recommended waiting to see how far she got on her own, and then reassess.

That point came when Zoe was about seven. Kellie would take her to The Trading Musician in the U District to play around on all the instruments. During one of their visits, Zoe caught the attention of a man named Aaron Walters - who would eventually become her mentor. She and Walters get together weekly to jam and discuss various music theories. Aside from recent vocal lessons, Zoe’s musical skill has developed naturally.

Talent aside, Kellie credits Zoe’s lack of inhibitions with her progress - inhibitions that might deter most 13-year-olds from doing what she's been able to do with her music. Zoe isn’t plagued by the trepidation that prevents many beginner musicians or kids her own age from putting themselves out there.

In 2019, during a Michael Franti in concert at Chateau Ste Michelle, Franti pulled Zoe up on stage and sang to her. After the song ended, he asked her what she does for a living. When she said she played the piano, he invited her to play, and without hesitation, she sat down at the keyboard and started playing Portugal the Man’s “Feel It Still,” and the band played along.

“She has none of that fear that most 13-year-old kids have, she’s really guileless,” said Kellie. “She’s got this really innocent enthusiasm coupled with a breadth of talent that you just don’t see in someone her age.”

Zoe’s parents support her in any way they can.

“It’s interesting parenting a blind Autistic kid,” said Kellie. “There are so few ways for someone like her to connect with peers well. Especially with the shut down, it’s been a really, really, really hard year. Music has kept her sane.”

Be sure to subscribe to Zoe’s YouTube channel to catch her next song and video, “Good Again,” due out early this summer.