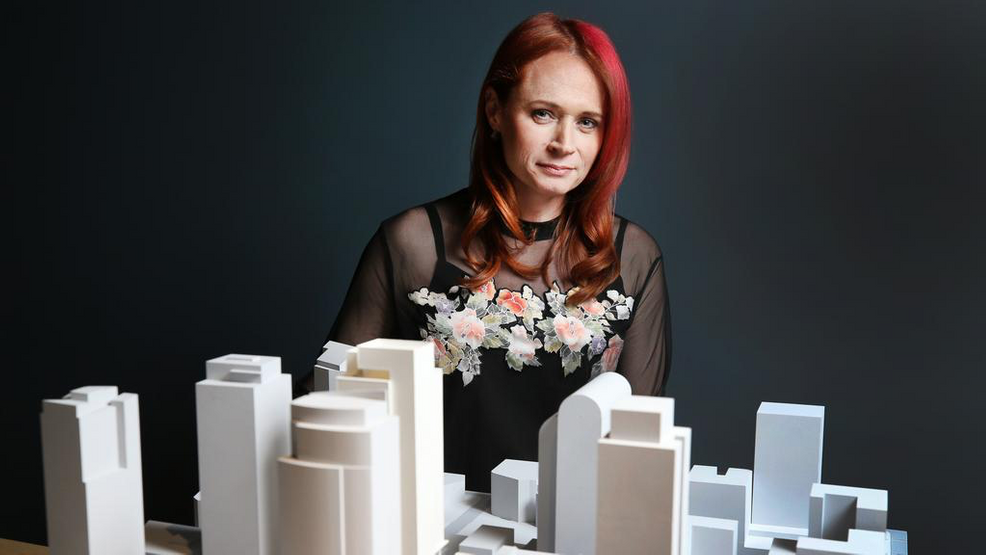 Mover & Shakers: Julia Nagele is an architectural icon in a male-dominated industry

Inspiring and visionary are just a few words that could be used to describe Julia Nagele.

From an architecture student to Director of Design at Hewitt (as well as being a professor, mother and wife), Nagele's journey towards becoming one of the most influential female architects in Seattle has been a serendipitous one.

Nagele grew up in northeast Pennsylvania, where she felt the pull towards the architectural field from a young age.

"I learned that I was interested in architecture when I was in high school, and that really came about from having one of those kinds of teachers in high school that we really connected with," she said.

For Nagele, it was her art teacher who not only taught her to take a career in a creative field seriously but helped prepare her with the skills she would need to have a successful career in design.

So how exactly did a self-dubbed "East Coast person" end up in Seattle? The short answer? Fate.

During her last year as a graduate student at the University of Maryland, Nagele traveled to Rome for an academic program. One June day, she was doing a history assignment in the iconic Pantheon building, which she described as being a "wonderfully designed, almost spiritual space" with a lot of cosmic connections. A stranger eventually sat next to her and asked Nagele if she was an architect. They ended up talking for a while and eventually parted ways. Two weeks later, Nagele's school program traveled to Florence, and while exploring the city, she heard her name being called.

"I turned around, and it was the woman that I had a conversation within the Pantheon, and we've been together ever since," said Nagele.

Turns out, Nagele's (then) future wife lived in Seattle, so as soon as she graduated, Nagele moved to Washington, where they've lived ever since.

"I got to Seattle via Rome," Nagele explained, "so that's the sort of really strange connection, and I'm so glad that's the way it worked out — I think the city is just terrific."

While the architecture industry is more male-dominated, Nagele has never let that stop her from achieving her goals. Instead, it gave her a sense of courage and strength as she navigated meetings and projects.

Her secret towards navigating a male-dominated world as a woman and member of the LGBTQ+ community? Being prepared for anything. Walking into a meeting, Nagele says that there's typically a ratio of 10 men to one woman (which is usually her).

"It's not that that creates a hostile environment or anything," Nagele explained. "But when you go into a room, and you're not like the other people, one way that I protect myself from that is to be super prepared. Somewhere along the line, you're going to have to talk to someone else and say 'This is who I am,' and for a lot of us, you have to risk destabilizing friends, family, colleagues and maybe your job."

Nagele's habit of over-preparedness has helped with the challenges that her recent project, The Emerald, faced in order to make sure it was a positive contribution to the neighborhood.

The Emerald is a downtown waterfront residential tower she designed, consisting of 262 luxury condominiums. Not only is it one of the tallest residential buildings on the West Coast designed by a woman, it's also the ninth tallest tower in the world designed by a woman. Nagele described her design process as finding meaningful cues and figuring out how to respond to them. This means not only considering the conditions of the area beyond the site but understanding what makes them fundamental aspects of the neighborhood.

For The Emerald, this meant drawing inspiration from conditions that made its location unique.

"The two things that were really cool about the Emerald project is, it's right on the border of the grid shift," she explained. "We're on one of those boundaries where this grid shifts from the downtown grid to the Belltown grid, and we thought that was very interesting. If the form of the tower could reflect some of those shifting angles of the grid, that would tie it to the site and give it a little bit more of an expression that says 'this building is for this particular neighborhood' in a very fundamental way."

From designing closets to her own house renovations, and now revealing The Emerald, Nagele recognized that all of the small things are vital for being successful in bigger things.

"I was working out of the house," she said, reflecting on the time when she used to work at home, "and I had a laptop and an LLC, but that's when I was doing really small work, and that was really valuable for the big work because you know that you're working with very little resources, and you learn that every aspect of the project is something that someone has to pay attention to."

With that sort of work ethic, attention to detail and immense amount of girl power, it is no surprise that this Seattleite is designing — and will continue to design — great things.