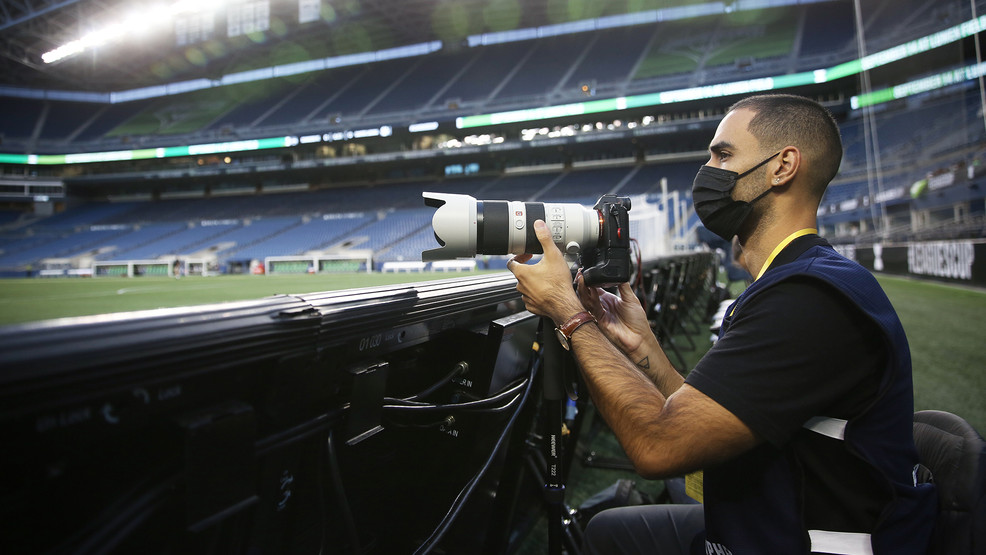 For the Seattle Sounders, it’s all about the energy they bring to the field. And for Seattle photographer Alejandro Sanchez Ochoa, it’s all about capturing that energy and sharing it with the rest of the world.

It wasn’t until he got his first disposable camera on a coveted field trip to Seattle’s Woodland Park Zoo that his interest in photography was sparked. But at the time, it was just something Sanchez Ochoa thought was interesting or cool. As a small kid in elementary school, he never imagined it could be a passion that would turn into something big.

Sanchez Ochoa, 27, grew up in the small eastern Washington town of Quincy. His parents immigrated to the states in the ‘80s, and he was the first in his family to attend college. With that, his goal of earning a college degree took precedence, so he didn’t put much effort into photography.

“Nobody looked like me as a photographer,” he said. “I never really knew it was an option.”

It was at the same time that Sanchez Ochoa discovered he was color blind.

“It was senior year in art class, and I had to do a color wheel,” he said. “I remember the day very vividly.”

Sanchez Ochoa painted one color and grabbed another that he thought was entirely different, only to paint the same two colors on the wheel. After his teacher first scolded him for not completing the assignment correctly, he realized his student may be color blind and suggested he look further into it. The following week, a physical confirmed his color blindness, and Sanchez Ochoa has been learning to work with it ever since.

While earning his Bachelor of Science at Central Washington University (CWU), Sanchez Ochoa picked up his first DSLR camera.

He set up a makeshift studio in his house in college, continued practicing his craft, and eventually, someone offered to pay him to do their senior photos. Having that aha moment, a realization that someone was willing to pay for his work, propelled him forward. But of course, it required plenty of practice, all while navigating being color blind.

Sanchez Ochoa is red-green color blind, meaning hues of grays and pinks, reds and greens and purples and blues are hard to distinguish. And as a photographer, it’s important to be able to offer a balanced photo.

“I’ve definitely had to learn to work around being color blind,” he said.

Graduating from CWU and now working as a multi-subject teacher in Bellevue, Sanchez Ochoa has had more opportunities to shoot. He’s worked on projects for Seattle Kraken and Fidalgo Roasters, but what Sanchez Ochoa considers to be his proudest work so far is the opportunity to shoot during the Seattle Sounders’ 2021 season for soccer-focused ICONIC magazine.

“I was obsessed with soccer in high school. It’s all I ever thought about,” he said. “I played soccer in high school, collegiately and semi-professional.” But even with that passion and skill for soccer, he never imagined he would one day step foot on Lumen Field, let alone stepping foot on the field as a photographer, ultimately marrying both passions together.

This season, Sanchez Ochoa has had the chance to shoot just about every home game. And through that opportunity, he was recognized by the Major League Soccer during the Sounders versus Timbers game.

“I didn’t think it was real when they reached out to me,” he said. Sanchez Ochoa was asked to shoot the game for MLS from his perspective for the league’s “Our Soccer” project. And for him, it was entirely surreal, a dream come true.

It’s a dream come true for Sanchez Ochoa to be recognized for his talent by MLS, but it’s also been important for him to be able to show others what they can achieve too. An Instagram comment told Sanchez Ochoa just how great it feels to watch a friend from a small town doing big things. And it’s a sentiment that can resonate with so many people as Sanchez Ochoa continues to perfect his craft and grow his business. Despite the pressure, despite obstacles, despite being color blind, he’s thrilled to be showing kids that they can do other things, whether it’s photography or another passion, even if it doesn’t seem like it could turn into a “real job.”