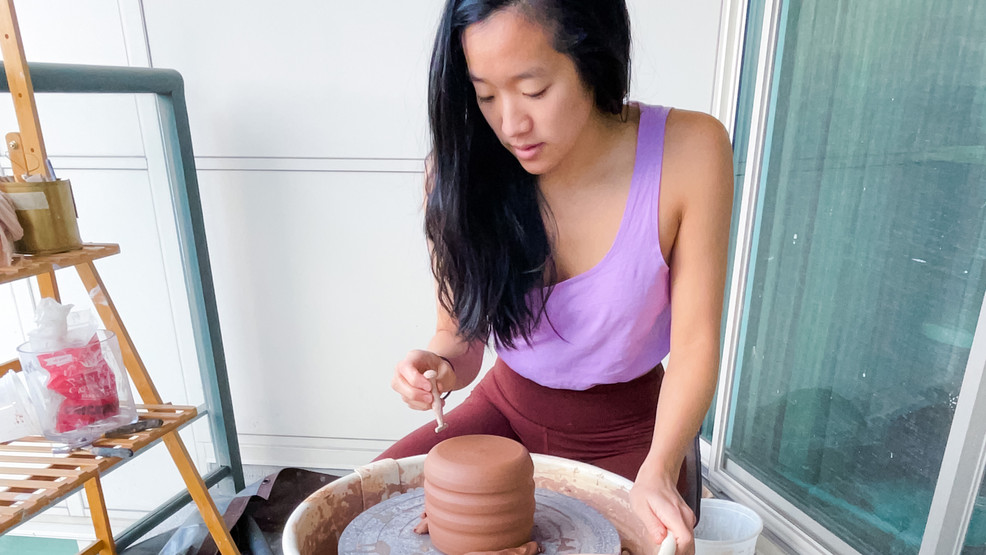 Jenni Liu has always had many interests and passions. She loves to learn. After Liu quit working in tech in 2017, she had more flexibility with her mental healthcare job, and thought about what she wanted to do with the extra time.

"After watching my friend who was learning pottery and sharing videos and photos of her progress, I decided to sign myself up for classes in early 2018," Liu says.

"I try to only make things that bring me joy," Liu says. "So I don’t take commissions and I don’t do wholesale. I sell at in-person markets a few times a year, and I post those events and dates on social media on my Instagram: @potterybyjenn."

This past fall, she also launched Rain or Shine Community Market. The idea is to host "accessible, welcoming, inclusive" POC-hosted events that prioritize "BIPOC makers." Read their mission statement here.

Liu remembers her first class in 2018 being so much more challenging than what she had expected or had seen on social media.

"I wondered to myself if I would be able to stick with it and cried a little bit after that first class," she admits. "I learned a lot from watching videos on YouTube and Instagram, talking with more experienced potters, and through a lot of trial and error and heartbreak."

She says pottery has taught her the lesson of letting go.

"If the piece isn’t working, if it’s starting to crack, start over," she says. "Don’t spend all this time trying to save it. Recycle the clay and make a new piece. When you’re just starting and you’ve spent so long one piece, this is very hard to do."

Liu has also learned that time gets away from her in the studio, where she can never spend less than two hours.

"Pottery sucks you in and it will take the time it takes to finish whatever step in the process you’re on," she explains. "It has taught me a lot of patience, too. Rushing often leads to mistakes."

Prior to getting into ceramics, Liu wouldn’t have described herself as a creative person.

"Since immersing myself in this craft, I now do," Liu says. "Realizing I am creative, thinking of new ideas, and working with my hands has helped me to overcome imposter syndrome (am I a good potter? would someone really pay to buy my pieces?). When I’m making something on the wheel or hand building a piece, my mind is singularly focused on what I’m doing. That’s such a nice break from the rest of my day when my mind is thinking about a lot of things at once."

Going into ceramics, Liu never anticipated finding such a wonderful and creative community. She made many friends at her first large studio. When the pandemic started, she bought all the equipment to put together a studio at home, yet she missed the community aspect.

"In the fall of 2020, my friend and I opened up a small studio and share the space with other ceramic artists," she explains. "I love discussing ceramics with them, and we have such a great community there."

Things evolved further this fall, with the unforeseen development of the Rain or Shine Community Market.

"I’m fairly new to selling in person," Liu says. "But after having many conversations over the past year with people who attend markets and makers who vend at markets, it became apparent that a lot of spaces aren’t welcoming to folks who identify as people of color (POC)."

Liu shares, "In late September 2021, I publicly spoke out about a popular, long-running market here in Seattle and how it is not inclusive and not welcoming, and it blew up. I received hundreds of messages from people who felt the same way — who had personal experiences with this market as a vendor or shopper—as well as from a lot of people (both white and POC) who hadn’t noticed anything 'off' prior to this and thanked me for opening their eyes to it."

"It honestly isn’t just this market," she continues. "Many markets in this area aren’t accessible or friendly to marginalized communities ,and that really doesn’t sit well with me. In the aftermath of the Black Lives Matter movement gaining national attention in the summer of 2020, more and more people began to seriously think about and educate themselves about their privilege and their role in maintaining systems of white supremacy."

Almost every single day, Liu thinks about a quote from Gloria Jean Watkins, better known by her pen name bell hooks — an American author, professor, feminist, and social activist who passed away this month: "What we do is more important than what we say or what we say we believe.”

"I didn’t set out to start a market," Liu continues. "But this felt like an area where I could make an impact and there was clearly a need. I am someone who tries to think deeply, do research, talk with others and then act. I can’t stay silent when I see problematic behavior, systems and institutions. Just learning isn’t enough, and performative virtue signaling is hollow. Education needs to turn into behavior changes and action, even if the actions are imperfect at times. Working towards social justice and anti-racism has to be something active and lifelong. It’s not something you only think about or do something about when it’s convenient. It’s a commitment that you make."

The inaugural market took place October 3, 2021. Some of the vendors had been registered for the market Liu publicly spoke out about, but dropped out because they no longer felt comfortable supporting and vending with them.

"I originally offered to organize a small yard market at a friend’s house for these vendors," she says. "Because, for some, this is their full-time job and they were depending on income on that day, and pulling out of the market jeopardized that. More and more makers who had heard about this effort joined and we were up to 20 vendors within two days. Because it had grown so much, I rented out a public venue to host the event. The vendors and the shoppers were intentionally choosing to participate in and support small, mostly POC makers, and it had such a community feel that I hadn’t felt in other markets I have vended in or shopped at."

The second market on December 4 happened at Tacoma's Parable, a Black-, woman- and LGBTQ+-owned space.

"From both these markets, the feedback from speaking with vendors and attendees was consistent in emphasizing the importance of creating these inclusive spaces and building a community of mutual support," says Liu. " In general, I really commend Seattleites for being more and more conscious and intentional in shopping small and supporting local businesses and brands in the past few years."

Liu encourages others to support artists in our community by going to local makers' markets, farmers markets or finding creatives on social media, using hashtags like #seattleartist #seattlemaker #madeinseattle.

Rain Or Shine Community Market depends on volunteers to help with set-up, take-down and the checking of vaccination cards or negative Covid-19 tests at the door. Interested volunteers can reach out via Instagram or email: rainorshinemarket@gmail.com.

A native Washingtonian, Liu once dreamed of moving south for warmer, sunnier weather.

"But Seattle will probably end up being my forever home," she says. "My friends and my family are all here, so it’s hard to think about leaving."

In her free time, she loves hiking and spending time with friends and family; she's really looking forward to more travel, too, as the pandemic eases.