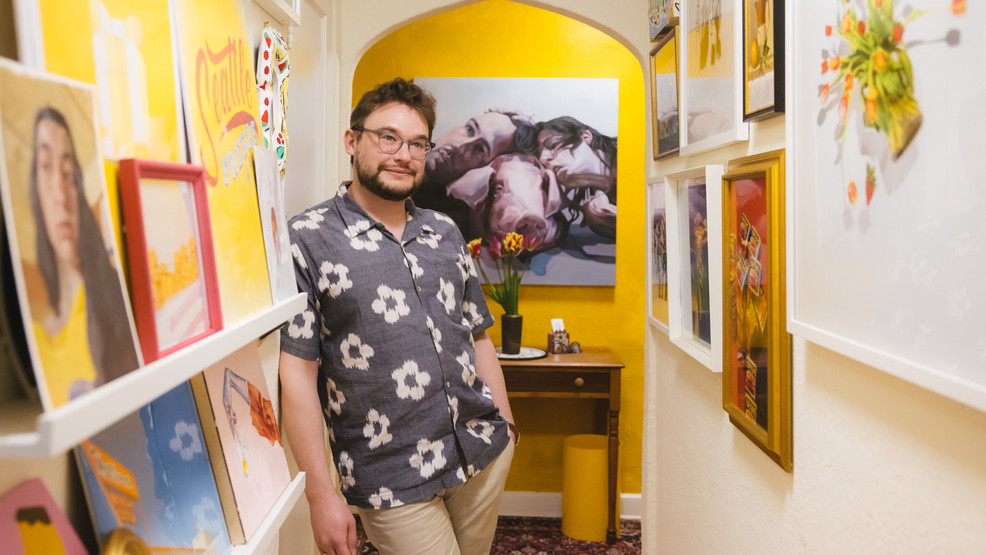 7 years of feasting on Seattle's FoodArt Collection with Jeremy Buben

The FoodArt Collection – affectionately referred to as "probably Seattle's only food themed art gallery" – has been neatly nestled in Jeremy Buben’s tidy Capitol Hill apartment for the last seven years. In its current location, the gallery has spent five years as a staple in the Capitol Hill Art Walk and is home to a bountiful array of featured exhibitions since its inception.

Buben’s lifelong love for the visual arts has taken him from studio art to jewelry-making, carpentry, and fashion design. His early days of collecting art were non-specific – until he was asked to guest curate a showcase at Joe Bar in April 2017.

"I started collecting art really casually," Buben says. "The Food Art Invitational at Joe Bar was really a gift because it gave reason and purpose to how I was viewing and consuming art. I originally got involved in the Seattle art scene by visiting home galleries and those folks really inspired the vision for what would become the FoodArt Collection."

After a three-month working sprint, the Food Art Invitational came to fruition. The overall exhibition included 50+ pieces of art from 25 artists and it was incredibly well-received by the community.

"You know, I was honestly terrified about hanging art in public because I couldn’t bear the thought of someone stealing an artist’s hard work off the wall. It all worked out, though. I had baristas telling me they had quite a lot of people coming through who went to look at the art first and then bought coffee as an afterthought. We hosted a couple receptions that were a lot of fun and they got me thinking about what else I could do to bring food-centric art to more people."

At the time, Buben was living in a studio apartment where he had art hung from floor to ceiling. He would leave his lights on and curtains open so passersby could enjoy a splash of art as they walk along the street. This studio housed his first themed exhibit "Meat Market," featuring the appetizing work of Genevieve St. Charles.

"Meat Market turned my vision into a reality," Buben says. "Partnering with Genevieve St. Charles was exhilarating, there is a primal appeal to the work in that collection that people really responded to. The La Croix Art Show also featured her work – it has been one of my favorites. It was during the peak of the La Croix mania. We served La Croix cocktails and avocado toast – it was wild."

While curating these early exhibitions, Buben had been keeping an eye on what is now his apartment in The Normandy Arms building on Capitol Hill. "The layout just called to me," Buben notes.

"I was willing to be patient for this space."

Oysters, fruit, burgers, sandwiches, and even sardines have graced the walls of Buben’s apartment.

"It has never been hard to find art I want to show," he laughs. "I go to see art as much as I can, and artists have always been intrigued by the collection. I think it has inspired quite a few new projects and I’ve witnessed the evolution of several artists in the community."

The transformation that takes place before and after an exhibition regularly reminds Buben of the fleeting nature of the world around us and that a wall doesn’t have to be precious. The process of shuffling art pieces around takes some patience, but the constant change is invigorating.

"Getting to live with new art on a regular basis is amazing and it is exciting that my living room looks different every month," reflects Buben. "All these pieces are covering A LOT of holes. I’ve never taken it all down for a full patch-and-paint, I just play a game of ‘hide the holes’ every time I make a change."

Only now, for the first time in seven years, will Buben’s space get a fresh start. At the start of 2022, Buben began musing about the end of the FoodArt Collection as we know it. In the spring, he began to plan an auction for the collection and launched it in June.

"I really had to think about how I wanted to bookend this adventure," Buben says. "It has always been my goal to highlight local artists. I’m excited to see the things I’ve bought filter into new homes, and I hope they are inspired to seek out some of these emerging Seattle-based artists themselves and even start their own collections."

Just because the FoodArt Collection is coming to a close doesn’t mean Buben is packing up and calling it a day. He is toying with the idea of hosting quarterly exhibits or salons to continue creating a central meeting place for artists and art lovers to come together.

While a part of him laments the end of an era, Buben views his move towards auction curation as an opportunity to redistribute art and create auction records for artists–some of whom may not have otherwise seen their work go to auction in their lifetime.

He hopes June’s auction won’t be the last and is investigating how to curate quarterly auctions of interesting collections to help artists continue to circulate and get paid for their work.

"Ultimately, I’m trying to figure out how to transform the transactional auction as we know it into a community event," Buben says.