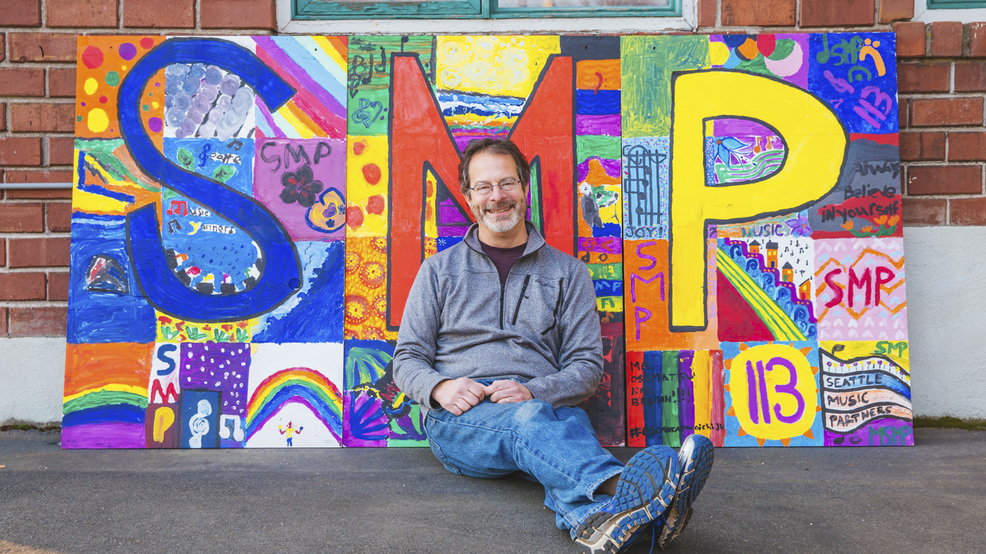 Any day of the week, you might also find Scott Gelband, executive director of local nonprofit Seattle Music Partners, helping to not only put those instruments in kids’ hands, but making sure they learn to play them, and don’t have to worry about whether or not they can afford to in the process. We sat down with Gelband in SMP’s tiny office, in a daylight basement in Yesler Terrace, to find out how this former corporate lawyer ended up powering the musical dreams of Seattle’s youth. (Image: Sunita Martini / Seattle Refined)&nbsp;
SEE MORE

Much has been said about Seattle’s music scene, renowned for its grunge history, famed instrumentalists like Quincy Jones and Jimi Hendrix, and seemingly never-ending stream of indie artists. But look beyond the city’s cherished marquees to its grade school auditoriums, and you’ll find plenty of school kids buzzing away at their clarinets or hammering out tunes on a glockenspiel.

And any day of the week, you might also find Scott Gelband, executive director of local nonprofit Seattle Music Partners, helping to not only put those instruments in kids’ hands, but making sure they learn to play them, and don’t have to worry about whether or not they can afford to in the process. We sat down with Gelband in SMP’s tiny office, in a daylight basement in Yesler Terrace, to find out how this former corporate lawyer ended up powering the musical dreams of Seattle’s youth.

A musician his whole life, Gelband used to geek out at record stores for hours on end

As a kid, Gelband first picked up the flute - but followed it by learning guitar and bass, keyboards and saxophone because he found just being a flautist really limiting.

"Because you can only play one note at a time," he said. "I wanted to play instruments where I could play chords, so I could write and it would make sense that way.”

This initial passion parlayed itself into an ever-changing roster of bands throughout his twenties, taking gigs all over New England. But for nearly two decades, it was the world of corporate law that kept him busy, often helping young companies raise money.

“When I could, I did some legal work for bands around town," said Gelbrand. "And when I couldn’t I was still at shows as often as I could, and in a coverband to keep me sane, playing at bars.”

Madly in love with his wife Catherine, and with two grown children of their own, Gelband’s path took a drastic turn from the buttoned-up world of law to the instrument-strewn, candy-laden office of this Seattle non-profit.

“After really losing myself, both enthusiastically and then less so in the legal practice, I just up and quit without really a clue as to what I was going to do,” says Gelband. “The plan was no plan.”

Looking at the leap in hindsight, Gelband fondly refers to that year as the 'Year of the Pajamas.'

"It was great," he said. "If I knew anything, I knew that somewhere in there I wanted to get back involved with music, and bring that back to being more central, not only to what I think about, but who I am and what I do.”

He considered starting a music school here in town, but the economics didn't play out. However, in 2006 the stars aligned.

"There was a great article by Bob Jameson [in the New York Times] that talked about Marnie O'Sullivan, the founder of SMP," he said. "That article detailed the program and more. It said that without funding and without more volunteers, it would be a shame that this program would go away.”

So Gelband reached out.

“I met with Marnie and I offered to help her out," he said."I officially joined at the beginning of 2007.”

After twelve years together at SMP, he and O’Sullivan continue to challenge themselves to create even more opportunities for kids to learn how to play music.

“We exist so that more kids who come from limited means, have the opportunity to learn how to play an instrument and read music," said Gelband. "We're really trying to break down the structural inequities that prevent anyone who wants to, from learning.”

"If we can inspire the kids with whom we work to continue with music on into their middle school and high school years - literally the complexion of the band and the orchestra room will change," he said. "So when you go and hear the award-winning Garfield Jazz Band or orchestra, it will fairly reflect the demographics of the community and the students that they serve as whole.”

It’s a big task, though, to take on what seems to be an ever-widening gap in music and arts education support.

“We're there to support what the district can provide and really amplify that,” said Gelband. Using a mentor model, SMP pairs volunteer teachers with enthusiastic students for private lessons as well as ensemble rehearsals.

“It’s a good booster shot to the school’s program,” he said. “And I hope that through the one-on-one attention that each students gets, they really bond with not only their tutor, but with the notion of being able to play music and being able to communicate, if not shout out, in this new language that they're learning.”

Gelband said it takes about 10 seconds for the magic to happen.

“When you're standing in the hallways and you can hear all of these lessons happening, on the group days when you hear this beautiful noise coming together, and you can just see the delight in the kids’ eyes," he smiles. "It's like everybody learning a language at the same time, and it's kind of a secret language. And it's one that most of their parents don't know, so there's something very empowering about it.”

Gelband doesn’t just sit back and write grant proposals either — though that’s definitely part of his job. He’s often in the schools himself, teaching woodwinds or running group rehearsals. Obviously, his desire to have music back in his life is coming to fruition and his joy shows through his passion for SMP.

“We don't charge the kids, or their families, anything to participate,” says Gelband, “We really want to take the whole economic issue off the table, if that’s an impediment to a child’s opportunity to learn.”

So SMP doesn’t just put instruments in the kids’ hands. The 100 percent community-funded program covers field trips too; and they rehire school buses to make sure the kids can get home safe and sound after their lessons.

A byproduct of SMP’s programming is that the kids — and the volunteers — are forming a new community and life skills in the process.

“There's a separate rich energy and power to the experience that the volunteers get,” says Gelband. “Beyond showing up and teaching a kid how to play the cello. Everybody comes to the program with different strengths and experiences, of course, and one of the things that we do very intentionally is help our volunteers come to understand what it means to be a tutor and a mentor. We have a whole curriculum geared towards helping them succeed...so they can understand their own circumstances and background may not have anything in common with the realities of the students with whom they are working, who they are charged with forming a positive relationship with, creating that trust.”

SMP spends a lot of time with their volunteers, going well beyond the hour-long lessons that they're teaching each week.

“We talk about how when the kids practice responsibility, persistence, and mastery and all that stuff, it bleeds across to their classroom work, or the way that they interact with the world,” Gelband continues, detailing how many of their teaching volunteers are past SMP students now in high school or college. “It’s also really cool to see them - at an age where self-absorption is expected and appropriate - step outside that and spend time helping these kids. It's a beautiful thing. That's the secret sauce.”

It’s clear Gelband loves what he’s doing now, and while community funding can directly translate into a working trumpet for a student.

"Raising money is never easy, and not often fun, but the opportunity to teach the kids every afternoon cures any bad juju from the day, and just really makes it an absolute pleasure to do," he said. "That renewed connection every day, being able to hang out with the volunteers and the kids, is really special.”