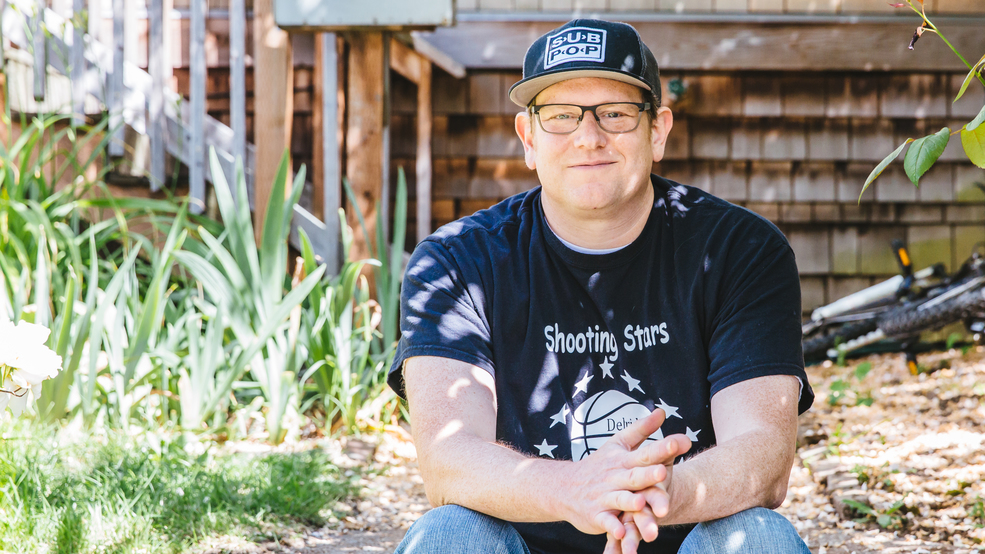 We sat down with Ashworth at his West Seattle home - his two daughters and their friends enjoying a sunny afternoon on the trampoline – to get to the heart of his passions, pursuits, and purpose. A journalism major out of college, Ashworth was working PR and media relations back in the day when he found himself, “for the first time in my life at a computer all day that was connected by email.” (Image: Sunita Martini / Seattle Refined)
SEE MORE

Forget Kevin Bacon. It’s PR expert and music scene guru Matt Ashworth who’s got six degrees on everyone in Seattle. As co-founder of the volunteer-run online music and culture magazine NadaMucho.com and General Manager and Senior Vice President at WE Communications, Ashworth is the first to tell you it’s all about who you know. And his innate ability and desire to make connections goes well beyond coffee talk.

We sat down with Ashworth at his West Seattle home – his two daughters and their friends enjoying a sunny afternoon on the trampoline – to get to the heart of his passions, pursuits, and purpose. A journalism major out of college, Ashworth was working PR and media relations back in the day when he found himself, “for the first time in my life at a computer all day that was connected by email.”

It was 1997 when he and his buddies started a message board to talk music and movies all day. And thus, NadaMucho.com was born. “A lot of us had writing or storytelling as part of our schooling but were not doing it around arts and entertainment. We were just thinking ‘oh this would be cool, we should start a magazine.’” For the first six months or so, “nobody really knew how the internet worked so we published issues,” he recalls, “and then we figured out we didn’t have to wait. If there was nothing to print, we could update it as much as we want.”

Dissatisfied with the existing mainstream music press at the time, Ashworth notes, “My read back then was that it was very sort of pretentious. I remember reading reviews and thinking they didn’t really tell me anything about this band.” He continued, “There was a lot of describing what the music sounded like as opposed to telling me a story.” That desire for the real story would continue to rear its thoughtful head throughout Ashworth’s career.

NadaMucho.com may have started as friends drinking and partying and arguing about bands, but it has since grown into, as Ashworth describes it, “a platform for people who are passionate about music and the arts.” While at one point he considered making it a career instead of a hobby, he noted that even 10-12 years ago, “it was difficult to make any sort of content-based property profitable unless you really narrowed your scope so you could sell to advertisers that spoke to a specific demographic, and I just didn’t want to do that. I just love music so much that I wanted us to be able to do whatever we want.”

That respect for the music and the open platform has made NadaMucho.com what it is today: a well-respected cultural touchstone of the Seattle music scene with no shortage of opinions. Take, for instance, their annual 41 Seattle Bands We’re Watching, wherein their contributors champion up-and-coming local musicians you should be paying attention to. What are Ashworth’s goals? “I think about all the people moving here to work at places like Amazon or Microsoft and I’m like ‘those people need a guide.’ So, NadaMucho.com is there to help them wade through everything and find music that’s cool,” he proffers.

This list also culminates in NadaFest - a collaboration with Ashworth’s longtime co-conspirator Tim Basaraba, talent buyer at Frelard’s Substation - now in its third year. For an affordable door fee (with all profits going to the bands), you can catch many of these emerging artists before they grace the stages of bigger-league festivals like Bumbershoot. “What we do helps the bands jump start to the next level,” says Ashworth of the community’s efforts.

Secondarily, he aims to provide a platform for other people who are passionate about music and culture to voice their opinions, in hopes that it helps them down the line, noting that he loves “if NadaMucho.com in any way helps our contributors to make connections or hone their craft, it makes it all worth it.”

In his day job, Ashworth is just as passionate about those connections. He professes the WE belief that in today’s world it doesn’t work to just focus on profits. “From the inside out we can help change that and help clients understand their purpose and do good things,” he notes about his work with brands and companies to find and disseminate their stories. “I always tell clients ‘here’s everything your company wants to say and here’s everything the audience cares about.’ Our job is to find the intersection.”

Office culture and recruiting are also a major part of his day. “I’ve lived here long enough that I know a decent amount of people,” he says, “and anytime somebody has said, ‘hey Matt do you know anybody at such and such company?’ and I go to Linkedin, 100 percent of the time there’s a musician I know who’s been in a band that I’ve booked or that we’ve covered on NadaMucho.com.” Through these connections with local musicians Ashworth is able to glean a little bit about the culture of any company he might want to have a chat with.

“I’m going to go have coffee with somebody who just has an idea or I have a random connection with because I don’t know where it’s going to lead but that person seems cool,” he points out, despite others’ amazement at the amount of meetings he takes. And he encourages others to do the same.

The number one advice he’d offer? “Always be willing to meet people and make a connection even if you don’t know what the goal is at the end. Everything in life happens through relationships.” This full circle strategy seems to be working. While he might not have set out with a twenty-year vision, “I feel the best I’ve ever felt because the agency I’m at has a really good soul,” he says. “I’m in a really good spot with my job and my hobby.”

And often, Ashworth finds ways to bring them together. “Everything I do is kind of because of and for people,” he notes, “one of my strengths as a leader is that I’m super good at knowing when I’m not the best at something.” It behooves him to have a sprawling circle of people he can go to for help, or insight, or collaboration. For instance, when planning the upcoming Capitol Hill Block Party artist and industry panel discussions.

“I started the panel series because I think there should be a stronger tie between the music and arts community that I choose to immerse myself in and the tech industry that my day job is in,” he says. And now, working with CHBP organizers and Lo Flux Media partner Kelly Fleek, 2017’s panels are set to bring those ties to the forefront.

The first of two panels will focus on strategies for artists to gain exposure in a post-big industry/big label world, with Ashworth being joined by the likes of Marco Collins of grunge-era radio fame, Tractor Tavern/Macefield Music Festival’s Leigh Bezezekoff, and Troy Nelson of KEXP/Killroom Records. A second panel is set to address “Resistance as Art: Gender, Race, Class and Sexuality as the Artist’s Platform for Change.” With past years’ panels providing expert insight into how to get your work seen, and how to get involved in the community, this year’s participants may very well up the ante. The best part? They’re free for the community to attend, no wristbands required.

Encouraged by the CHBP organizers to fill Capitol Hill with complimentary programming, Ashworth is also championing Nadamucho.com contributors Travis Trautt and Jake Hanson, who organized a photo tribute to festivals past just outside the gates at Everyday Music. There, you can catch the work of local concert photographers along with free live band performances from 3-6pm each day of the festival.

At the end of the day, it’s Ashworth’s collaborators that he acknowledges for keeping things moving while he focuses on the day job that enables him to support his family. “I couldn’t stay involved had I not had this network of people that also wanted to be involved,” he says thankfully. “I’ve got an amazing wife who’s like our Chief Operating Officer, and I surround myself with people I like who are smart and talented.” Something we should all strive for, it seems.