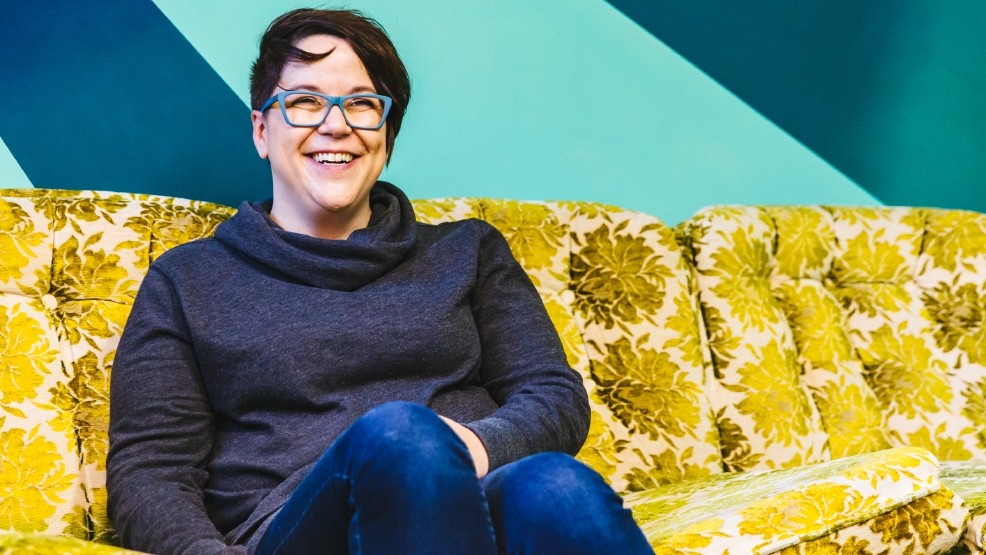 Somewhere down the line, “giving back” became associated with punishment, or earning extra credit. Amy Faulkner is out to change all that that. But the Seattle transplant never intended to. In the midst of the recession, and new to the city, Faulkner set her mind to executing creative events for charity, and thus, The World Is Fun was born. (Image: Sunita Martini / Seattle Refined)
SEE MORE

Somewhere down the line, “giving back” became associated with punishment, or earning extra credit. Amy Faulkner is out to change all that that - even though she never intended to. In the midst of the recession and new to the city, Faulkner set her mind to executing creative events for charity, and thus, The World Is Fun was born.

“I decided to do all of the events that I had crazy ideas to do,” says Faulkner, who kicked off her nonprofit career with an event called Beard & Stache Fest.

“I wanted to do it for charity,” she said. “But that was almost a side note, too. I wanted to do an event, and stay busy, and keep my skills, and establish myself as an event planner here in Seattle, 'cause I hadn't done a lot of stuff here. And meet new people. And what better way to do it than get a bunch of people together in a bar. Now I've met 14,000 new people. Careful what you wish for.”

It was with that event that Faulkner saw the disconnect with how people in their 20s and 30s viewed charity - so she set out to make volunteering more fun and less like something you have to squeeze in.

“Without any nonprofit experience whatsoever, we became a 501c3 nonprofit organization, and our mission is to get people involved in giving back to the community.”

TWIF has since gone from friends getting together once a month - to over 80 events a year, 5,000 active volunteers, 122 nonprofit partners, and $1.5 million in service given back to the community.

“The first step in this is knowing that people can't donate or volunteer with an organization that they don't know exists. We want people to know the businesses in their community and support them, and those businesses to in turn support the community.”

Whether it’s directly matching people with volunteer opportunities, running corporate employee volunteer teams, or hosting creative (and often delicious) fundraising events, TWIF has been busy. “For whatever reason, people are getting involved now, and it’s a really good thing.” They’re breaking down the barriers of volunteering and charity, one by one.

“There are all of those stereotypes around religion, or punishment, or whatever the reason is that you volunteer,” says Faulkner, “I’m not saying people aren't good at heart, but they want to get other things out of it.” Whether you’re looking to meet new people, gain new skills, or help the cause, TWIF accepts whatever gets you in the door. “We’ve embraced that, and in some cases, we've added beer to that equation.”

While she is humble about the success of TWIF thus far, Faulkner’s work is getting noticed. In fact, she was the Washington state winner of the Jefferson Award in 2016. Established in 1972 by Jacqueline Kennedy Onassis, “it’s considered the Nobel Prize in public service,” she notes, with a shy grin. She shows off her framed award in its sensible space between one wall plastered with rainbow-colored sticky notes and another displaying photos of the entire staff.

This June, as an ambassador for the foundation, Faulkner will be a keynote speaker at their national ceremony. What’s she most excited about? Warby Parker is their 2017 corporate winner. “I'm a total glasses nerd. I own like 24 pair of glasses, and haven't bought new glasses for three years. I'm not leaving without a sponsorship.”

On top of that, Faulkner is working on a new app, one that, “is similar to Tinder, but for nonprofits. You can go in and you can say, ‘I'm interested in volunteering, or collecting items, or going to charity events. You will say what you're interested in, and then it will show you profiles of our nonprofit partners. If you swipe, because you're interested in what they do, or something they need, you get a list in the end of all of the matches. And from a user perspective, the person on the other side will actually call them back.”

Keeping in mind that TWIF are the folks behind the sell-out “Bacon, Eggs & Kegs” events, it’s not a stretch to assume their doing-good-as-dating concept will be just as popular. Even without the app, “The best way for people to get started is to go to our website events page. You’re not committing to anything beyond what you sign up for. It’s a nice way to get your feet wet without making a commitment.”

Taking the stress and long-haul obligation out of trying something new is what sets TWIF apart. “We know from talking with volunteers that if they go to a nonprofit, they’re asked immediately to commit to 4 hours a week for 6 weeks,” she says, “we think volunteering should be looked at more like dating. Never ask anyone to commit. It’s like asking for 6 dates, a week apart, ahead of time.”

What’s next for Faulkner? Come July, you can find her and TWIF tossing back burritos at the latest incarnation of fun, food, and community, the Ballard Burrito Fest. The event is one intended, “to kind of let people know that we're here. As crazy as it is, half the time people people come out to our events and don't even know what the organization is,” says Faulkner, who also has a goal of getting her team into a new space soon.

“It’s really all the volunteers. It's unbelievable to me, to think about, we moved into our office space five years ago. There were 15 of us, and we were like, ‘What would we possibly do with all this office space?’ And now, we don't all fit in the building. We hit 100 recently. It's just completely insane to me.” The hope is that the new space will be more of a community club space, for meetings, events, meal programs, and of course, plenty more burritos.