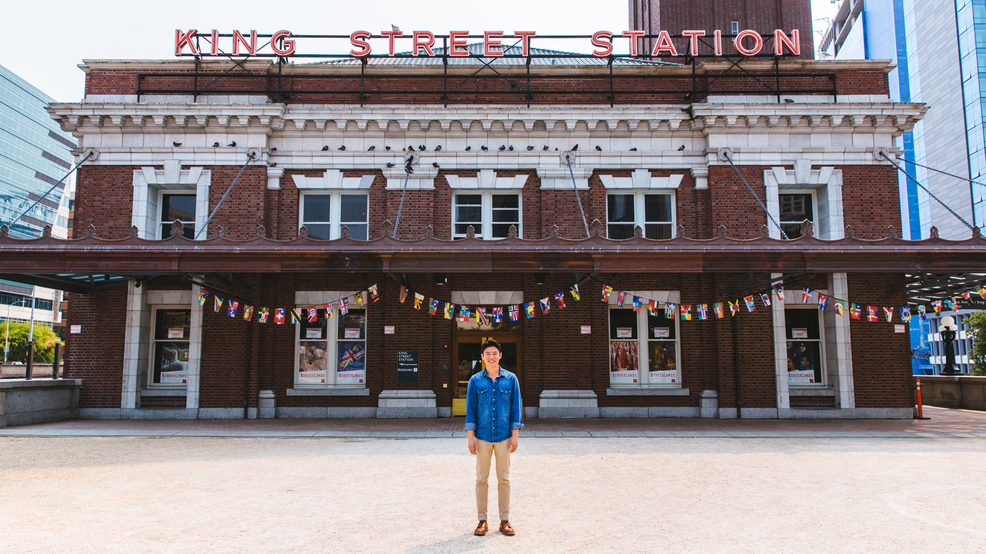 Going door-to-door, Deng says he, “realized for the first time how many different groups had settled here in Seattle.” And a lot of those people would be cooking. Upon asking them where he could try these foods, “Many would say, ‘we don’t really have restaurants, this is just stuff we make at home.’” (Image: Sunita Martini/Seattle Refined)
SEE MORE

Movers and Shakers: Meet Philip Deng, the man who aims to connect people through food

What does “organizing” really mean? To Philip Deng, founder and Executive Director of the nonprofit, MarketShare, it’s about creating opportunity. And in this case, creating space, too. We sat in the sunny courtyard of Seattle’s King Street Station with Deng and his black poodle puppy, Harper, to talk about this very personal–yet very community-centric–pursuit of passion.

A grand idea for anyone, for Deng, Marketshare is a personal investment. After college, Deng set out for nonprofit work in the Marshall Islands in China. A gateway to travelling and thus experiencing a wide variety of food and street food culture, he says, “For the first time, I had to learn several new languages and work with several new communities.”

“Each time I moved, food was always the way I would start off the interaction. It was how I communicated, expressed my thanks, and showed my enjoyment.” Upon his return, Deng was hired by the Obama campaign as a field organizer in Washington’s 37th legislative district, which just so happens to be one of the most diverse areas in the country.

Going door-to-door, Deng says he, “realized for the first time how many different groups had settled here in Seattle.” And a lot of those people would be cooking. Upon asking them where he could try these foods, “Many would say, ‘we don’t really have restaurants, this is just stuff we make at home.’”

Speaking with a Somali woman in Yesler Terrace, lightning struck. Deng thought back to the street food scene in Asia and all the diversity we have here in Seattle, he recalls, “and in that moment I thought, ‘we need a market,’ a permanent space that would mimic the street vibe in Asia where anybody can be a cook, anybody can be a customer. These folks could finally get a chance to start a business and then we’d all get to try this food.”

As Marketshare’s website says, they, “empower diverse communities to create public markets that fuel food entrepreneurship.” It’s a mouthful, sure, but sometimes putting words around a powerful idea is the fuel it needs to get off the ground.

Founded by Deng about three and a half years ago and having survived a pilot program that involved mobile food stalls, MarketShare seems to be finding its footing, and it’s Deng’s more-than-full-time job. “When you organize a community what you’re really working with is a story,” explains Deng. “It starts with a narrative about who we are and who we want to be and we knew that this couldn’t just be conceptual.”

They’ve found that the demand is there. “The word ‘authentic’ is overused a little bit these days but food cooked by representatives, natives of the culture; it's so delicious and it's so interesting and it breaks up the pattern and it's a great way to connect with people,” says Deng. Which is exactly what MarketShare is trying to do, in the form of a permanent international street food market.

The grassroots movement has set their sights on the historic King Street Station for their home, however they didn’t originally envision that. “I lived in Chinatown,” recalls Deng, “so I walked by this place a thousand times and it never occurred to me.” But after seeing the space, he thought, “This is not just a market but a civic institution waiting to happen.”

Central to the city, King Street Station has, in recent years, undergone an incredible transformation with renovations that have restored its architecture and incredible vaulted rooms. Seattle Office of Arts & Culture even has space there that hosts rotating art exhibits. All it needs is the nosh.

At the end of August, MarketShare hosted Summerfeast, a fundraiser set in King Street’s courtyard, to help cover some of their basic costs. The dinner featured seven courses of international cuisine from places as far flung as Peru, China, and Iraq, plus a Mexican tres leches cake for dessert, dusted with edible flowers.

But arguably, “the bigger outcome that we wanted from the dinner was to gather a bunch of people in this beautiful space and just let their imaginations run wild,” opines Deng. “If we can pay for this to be built, it means sustainable businesses created, not to mention a great resource for the people, for tourism, for the identity and confidence of our city too.”

While Deng continues to hustle, he stays grounded with a supportive, encouraging family and a close-knit group of friends that he met through rock climbing. “They know what I’m working on but we’re not talking about it,” he says. “They’re building up the rest of me. I’d say they’re pretty essential to what I’ve been able to do.”

At the end of the day though, Harper is his rock. “He is about the happiest dog I’ve ever met so when things are down and I’m just ready to give up on the whole thing, I look at him and he’s just smiling. Maybe Harper knows, though, that there are good things in Deng’s future. And if Marketshare capitalizes on their recent momentum, good things will be in our stomachs, and our community, soon too.