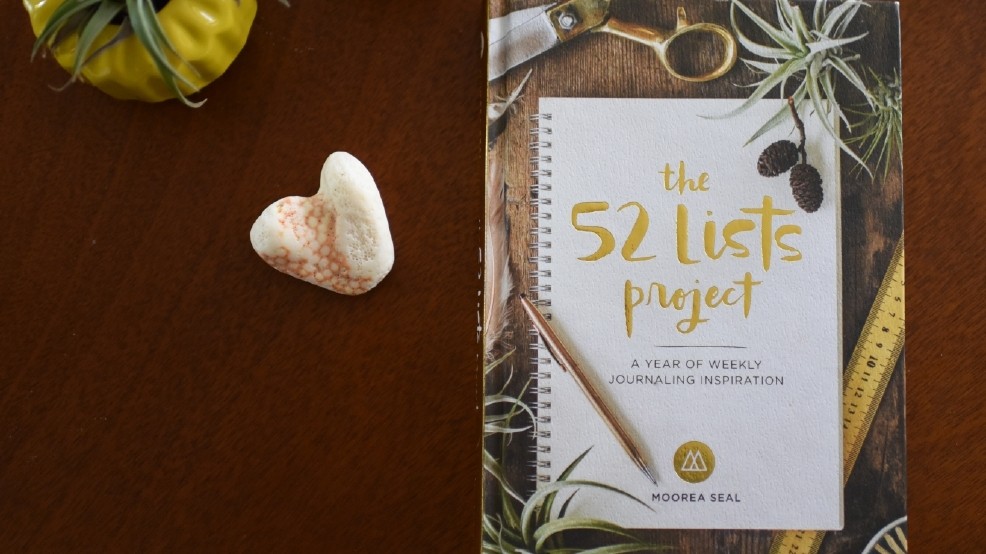 Moorea Seal recently wrote a book on her favorite topic - Lists! The 52 Lists project features 52 prompts, one for each week of the year, ranging from the introspective to the aspirational. (Image: Rebecca Mongrain/Seattle Refined)
SEE MORE

Love Lists? Make One a Week with the "52 Lists Project"

In 2013, Moorea Seal started a project called the 52 Lists Project. The idea behind the project was to take time each week for oneself to reflect and create a list based on a topic as suggested by Seal. 2013 ended up being a busy year for Seal who already ran a successful jewelry and design business. After watching her Pinterest follower numbers explode before her eyes, she decided to follow her dreams and launched the MooreaSeal.com retail site along with opening a brick + mortar shop in the Belltown neighborhood in 2014.

Her project may have gone into hiatus but her love of lists remained strong. In late 2014, after talking with a representative at Sasquatch Books, the project was launched again but as a real life journal. In the Fall of 2015, the 52 Lists Project book was published.

The 52 Lists Project features 52 prompts, one for each week of the year, ranging from the introspective to the aspirational. Arranged by season, each list comes with a "Take Action" prompt to help you take your learnings and move forward. This book is a way to take stock without having to devote hours and hours to introspection.

The 52 Lists Project has taken off and was even featured on the Oprah website as an inspirational book choice and is the second best selling book for its' publisher, Sasquatch Books. Seal said The 52 Lists Project being recognized by Oprah was the most meaningful recognition that she's received. "I feel like I'm making an impact," said Seal. "My voice is important and valid."

Throughout all this Seal has been working hard on the Moorea Seal brand and even has three more books in the works. Her next book, 52 Lists for Happiness is due out this Fall.

Seal especially loved working on 52 Lists for Happiness because she's never focused on happiness as part of her life goals. "I've always thought of happiness as a possibility of my pursuits," said Seal. With the completion of this book, her new goals include allowing her own happiness to be the main pursuit and then happiness for others. "If you can't invest in yourself," said Seal. "How can you invest in others?"

Moorea Seal is also releasing a new Jewelry line in the Fall. All of the Jewelry has been designed by Seal herself and produced in Seattle. Additionally there will also be a paper goods line which compliments the 52 Lists books coming out in the Fall.

In addition to the Moorea Seal store at 2523 3rd Avenue, you can find Moorea Seal products at a Pop-up in Madewell in June and the Renegade Craft Fair in July. Check out Moorea Seal's weekly happy hour on Friday from 5 to 7 p.m. There are free drinks and fantastic shopping opportunities.